One year ago, Embraer delivered the first E195-E2 to the Brazilian low-cost carrier, Azul Linhas Aereas. A lot… 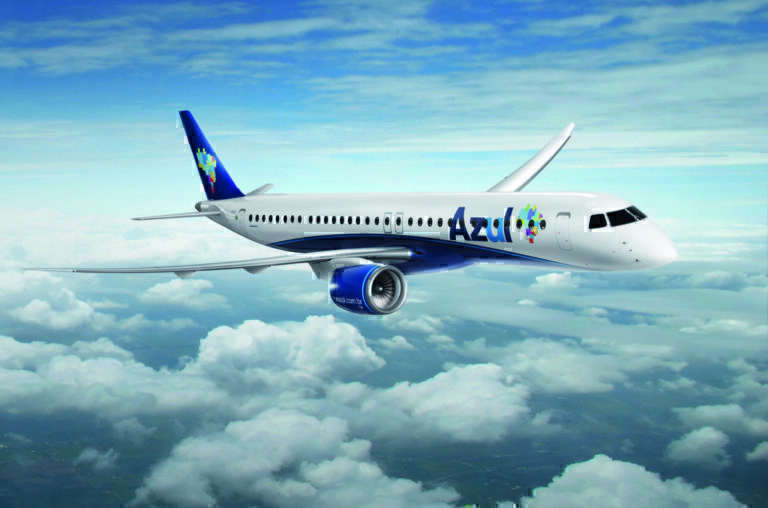 One year ago, Embraer delivered the first E195-E2 to the Brazilian low-cost carrier, Azul Linhas Aereas. A lot has changed since the reception of this first airplane. Nevertheless, the E195-E2 is helping Azul reshape its route map across Brazil. Let’s investigate further.

The E2 family is the new bet of Embraer for the aviation market. It has improved efficiency as it allows airlines to carry 32 more passengers than the E190. In the meantime, while carrying more passengers, it also uses 19% less fuel and has a 31% drop in CO2 emissions. And, to make it better, it also emits 41% less noise. It is a game-changer for regional aviation.

Embraer has gone a long way since developing its first airplane, the EMB 110, also known as the Bandeirante.

The E195-E2 has a typical capacity of 146 seats, a range of up to 4,815 kilometers, and a cost of 60.4 million USD per unit. It was an airplane designed for the future. Now, due to the COVID-19 pandemic, the E195-E2 has an even better chance of becoming a powerhouse. Along with other single-aisle planes like the Airbus A220, the E195-E2 (and its little brother, the E175-E2) can help with the aviation industry’s recovery.

Time really flies! We delivered the 1st #Embraer #E195E2 one year ago. Today, @azulinhasaereas is opening new markets with it, all across Brazil. Watch this #Incredible Journeys: https://t.co/TwAUeRg3gK #EmbraerStories #WeAreEmbraer pic.twitter.com/q5SDnbUWPt

Azul Linhas Aereas is the largest operator of the E195-E2 plane. According to Planespotters.net, it has five aircraft of this type. But it still needs to receive many more. In January, the airline increased its order of 51 E195-E2 to 75. At that moment, Azul planned to have 75 E2 jets by 2024. Those plans have changed, but the future of the E2 family with the Brazilian carrier hasn’t. As John Rodgerson, CEO of Azul said,

“The A320 neos and E2 are the principal pillars in our goal to significantly increase revenue and earnings while we grow responsibly over the next five years.”

In a recent video by Embraer, Rodgerson said that the E2 is a gamechanger for the low-cost carrier. He said,

“When you get an aircraft that has 18 more seats and burns 19% less fuel than the previous generation, you’re gonna fly it more hours a day.” He added that its Embraer family has allowed Azul to increase its map route in Brazil.

Recently, Azul announced it will defer 82 aircraft deliveries to 2024 and beyond due to the current travel demand uncertainty. Nevertheless, we expect that the Embraer fleet will continue to be a critical part of Azul’s network and fleet strategy. As Rodgerson said, the fleet’s renewal guarantees Azul will have the most fuel-efficient aircraft in the industry. In consequence, it will allow the airline to drive down its unit costs.

While it may take a while for the Brazilian aviation industry to recover, Azul is poised to grow. It recently launched a new regional carrier. Azul also has big orders for new planes so, when they arrive, they will allow the airline to increase its market share.

Have you traveled onboard the E195-E2 of Azul? How has it been? Let us know in the comments.

Alaska Airlines “Buy One Get One” Row Promotion Returns

Negotiation 101: Purchasing a Quaint, Woodsy Cottage for a To-Be-Determined Amount...