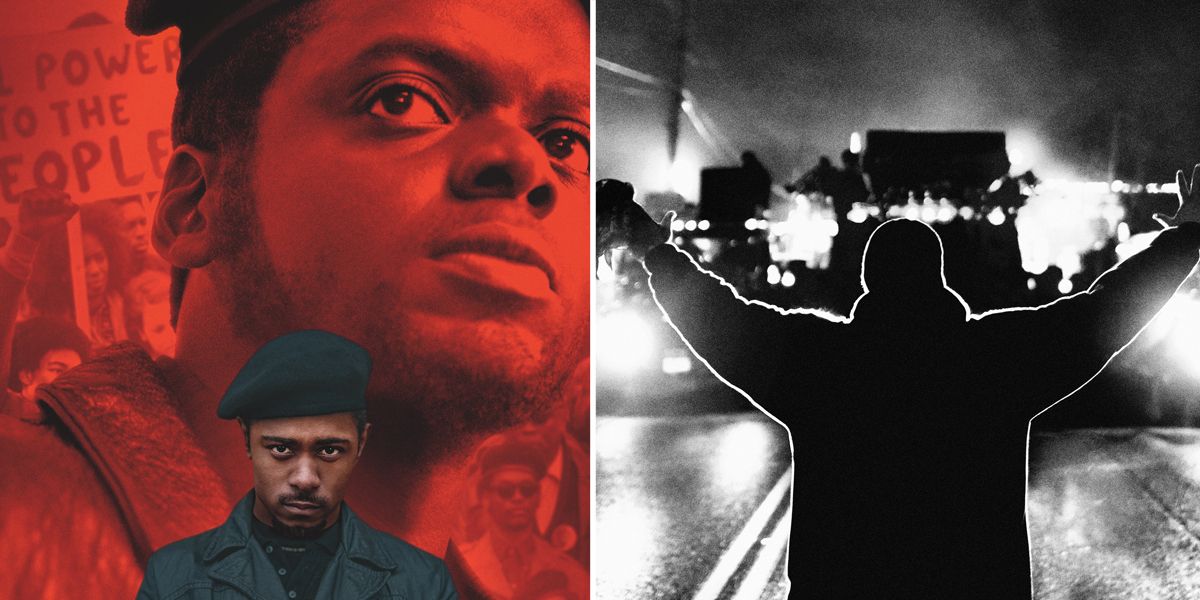 "You can jail revolutionaries, but you can't jail the revolution." The short life of former Black Panther Party Illinois Chapter Chairman Fred Hampton is dramatized brilliantly in Shaka King's latest feature, the acclaimed Judas and the Black Messiah. The film stars Daniel Kaluuya as Hampton and LaKeith Stanfield as Bill O'Neal, the FBI informant who infiltrated the Black Panther Party. Hampton, an outspoken socialist who created a multiracial alliance in the 1960s, was targeted by the FBI for his radical politics and actions.

Hampton was killed during a late-night FBI raid in his home in 1969, when he was just 21-years-old. Contemporary historians now refer to his death as an assassination. Hampton's story is just the tip of the iceberg when it comes to Black Power, resistance, and liberation. A plethora of documentaries attest to the movement's enduring legacies, felt to this day through social justice organizing and large-scale protests.

Relying on old footage shot by a group of Swedish journalists, The Black Power Mixtape 1967 - 1975 pays tributes to the leaders who were central to the often misunderstood movement. The film, which traces the major events from each year it documents, also includes contemporary interviews from artists, activists, and historians.

One of the key figures of the Black Power movement, Angela Davis, figures prominently in the documentary. The film features footage from Davis's stint in prison after she was targeted by the FBI in the early '70s as well as recent commentary from her.

9 The Black Panthers: Vanguard Of The Revolution (2015)

Stanley Nelson Jr.'s two-hour documentary about the Black Panther Party took seven years to make. This harrowing cinematic account of the rise and evolution of the movement consists of never-before-seen footage.

The documentary puts a lot of effort into detailing the many clashes between the Black Panther Party and police. While some critics have taken fault with Vanguard of the Revolution's condensed approach to retelling the story of the Black Panther Party, others praise it as a fantastic primer for those who don't know much about the history of the group and its many figureheads.

Instead of looking more generally into Black liberation groups, Free Angela Davis provides an intimate look into the experiences of the radical philosophy professor and activist Angela Davis. Early in her career, Davis was targeted by the FBI, who attempted to slander her reputation by deeming her a terrorist.

RELATED: Spike Lee: All Of His Documentaries, Ranked (According To IMDb)

Free Angela Davis explores how Davis endured prison, media criticism, and threats from J. Edgar Hoover's henchmen to become one of the most important icons of the '70s and beyond. The film frames its storytelling around Davis's own voice-over narration, giving her a chance to share her experiences in her own words.

I Am Not Your Negro tells the story of prolific writer and activist James Baldwin, whose works and words have received a much-needed reassessment in recent years thanks to groups like Black Lives Matter. Baldwin, who died in 1987, spoke eloquently about white supremacy and America's enduring legacy of racism.

Instead of lambasting the burgeoning Black Power movement, Baldwin aligned himself with it in the late '60s and early '70s, leaving many less radical Civil Rights activists to rebuke him. Narrated by Samuel L. Jackson, I Am Not Your Negro attests to Baldwin's refusal to let himself, as an openly gay Black man, be tamed or misrepresented by both his white and Black contemporaries.

Made in the few years after Fred Hampton's short life was brutally ended by Chicago police and the FBI, The Murder of Fred Hampton seeks to challenge news reports and police testimony about Hampton's death. Filmmaker Howard Alk gained access to Hampton's unsecured apartment, where he managed to take footage of the crime scene.

RELATED: Waiting To Exhale & 9 Other Black Movie Classics That Should Have Their Own TV Series

Ultimately, The Murder of Fred Hampton is a truth-finding investigation that comes to stunning conclusions about government collusion, cover-ups, and assassinations. It's a fantastic follow-up to Judas and the Black Messiah.

Even though it gives too much screen time to white activists, Revolution '67 contains compelling footage about the six-day riot that unfolded in Newark, New Jersey in 1967. After a taxi driver named John Smith was beaten by police officers, protests against police brutality quickly escalated into violence -- violence fueled by decades of racial oppression, assaults, and economic disparities.

Filmmakers Marylou and Jerome Bongiorno attempt to connect the Newark riot to similar events that year in Harlem, Jersey City, and Los Angeles's Watts neighborhood. It doesn't offer up any easy answers, but Revolution '67 solidifies a tumultuous time in American history.

One of many documentaries about Martin Luther King, Jr., King of the Wilderness shines a light on the Civil Rights icon's more revolutionary approaches to fighting racism and injustices. Many mainstream narratives about King ignore his anti-capitalist and antiwar beliefs, but King of the Wilderness makes these central to its retelling of King's life.

While King could have easily ended his fight with the passage of the Civil Rights Act in 1964, he kept on, making himself the ire of both President Lyndon Johnson and FBI director J. Edgar Hoover. Knowing he would likely be killed for his actions, King became an outspoken critic of housing discrimination, poverty, and the Vietnam War.

When 18-year-old Michael Brown was killed by a white police officer in 2014, the world watched on as residents in Brown's hometown of Ferguson, Missouri took the streets, organizing mass protests and demonstrations. While the news media focused on riots and property destruction, the vast majority of what transpired in Ferguson was cooperative and peaceful.

Filmmakers Sabaah Folayan and Damon Davis hope to set the record straight in Whose Streets? Instead of sensationalizing the response to Michael Brown's death, this documentary focuses on two activist groups who rose up in the wake of the tragedy: Hands Up United and Cop Watch.

Perhaps the most comprehensive cinematic exploration of the expansive racial justice movements, Eyes on the Prize is a 14-part docuseries that focuses on the various struggles, victories, and challenges faced by activists between 1954 and 1985. Relying on archival footage and narrated by former activist and Georgia Congressman Julian Bond, this ambitious project was released over three years.

Bill O'Neal, the FBI informant played by LaKeith Stanfield in Judas and the Black Messiah, is actually featured in the second half of the series. He's one of the dozens upon dozens of people interviewed for Eyes on the Prize.

Another important film about the Black Panther Party, All Power to the People chronicles the history of the movement, its leaders, and its adversaries. Relying more on interviews with those involved and less on bombastic news coverage, it paints a more intimate portrait of the Black Panther Party, whose various chapters were systematically terrorized by the FBI and local police.

Lee Lew-Lee's documentary also includes information about related groups, such as the American Indian Movement and the Black Liberation Army. It showcases how these groups worked together to advocate for their people.

Retro-Cast: If Breaking Bad Was Made In The '90s | ScreenRant