10 Disney Villains With The Most Sympathetic Backstories, Ranked

Many Disney villains are more iconic than the studio's heroes. But from Ursula to Maleficent, there's often some humanity to these wicked antagonists. 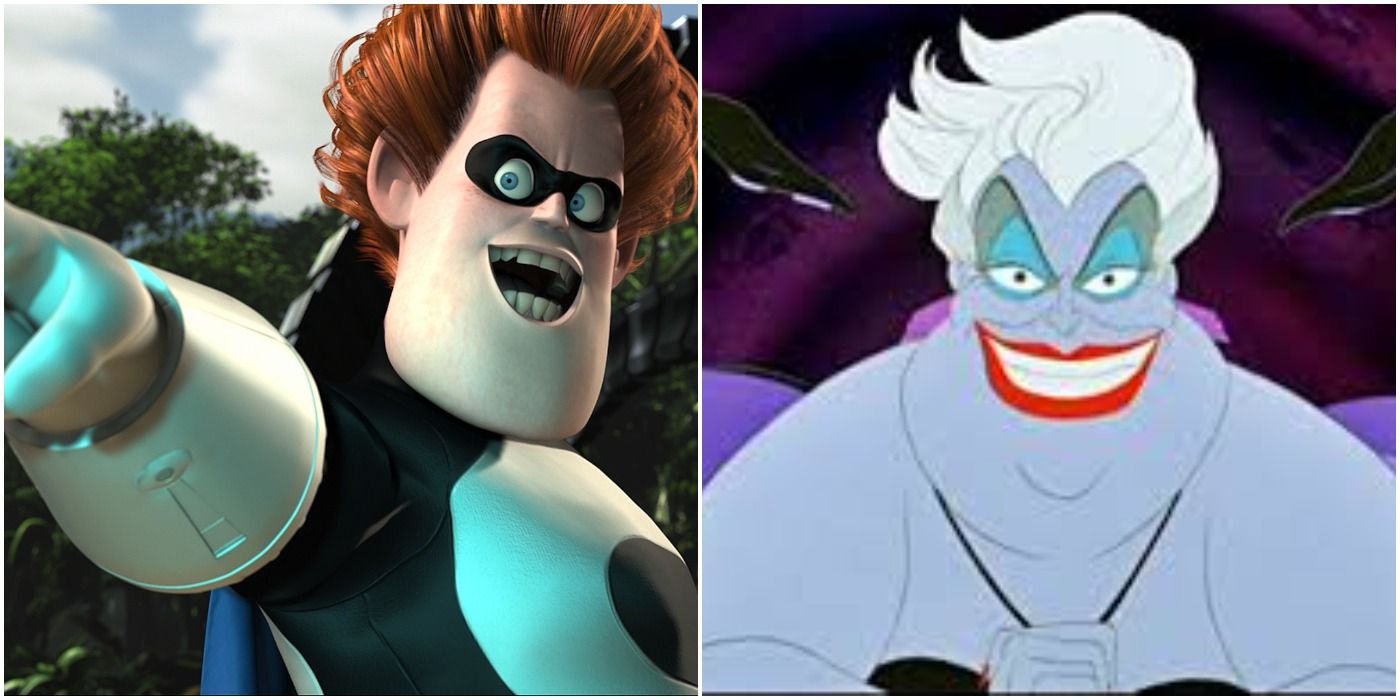 Over the long and acclaimed history of animated films, Disney has created almost as many memorable villains as it has heroes. Many of these characters have gone on to become some of the most iconic bad guys of cinema history. They are often the kind of villains that audiences love to hate while rooting for the hero to defeat them.

However, some Disney villains are far more complex than they first seem. Though their actions might be evil, their backstories show that they are perhaps misunderstood in some ways. It doesn't excuse them, but it does inspire some sympathy for these apparently villainous characters.

Pixar's superhero film, The Incredibles imagines a world filled with super-powered people. One of the most renowned heroes of the day is Mr. Incredible, and his biggest fan is a young boy named Buddy.

Though Buddy doesn't have superpowers of his own, he is smart enough to develop technology to make himself a crime fighter. He finally meets his idol, Mr. Incredible, only for the hero to rudely dismiss him. The rejection turns Buddy into the villainous Syndrome who seeks to eliminate all superpowered beings, but what he really wanted was to be a hero himself.

As soon as he is introduced, it's quite clear that Gaston is a jerk. He is arrogant, rude and the way he tries to woo Belle is all wrong. However, the Beast is not much better when you think about it. His whole plan for wooing Belle is to lock her in his castle until she learns to like him.

So when Gaston learns that there is a monster living in the forest who is capturing people, his impulse to hunt it down is not all that crazy. In fact, it is quite brave of him to risk his own life to keep the village safe.

Edgar is not remembered among the best Disney villains, likely because he is quite bumbling in his schemes. However, it makes sense that evil deeds don't come naturally to him as he is just a blue-collar worker looking to get what he deserves.

After years of loyal service to a wealthy woman, the polite Edgar is shocked to learn his employer is going to leave her entire fortune to her cats. Not only will Edgar not get anything for all his hard work, but to see it go to a bunch of animals is just insane.

One of Disney's most entertaining villains is Ursula. This sea witch was banished from the kingdom of King Triton for unknown reasons and has had to live in isolation while plotting her revenge. She finds an opportunity when she convinces Triton's daughter Ariel for the opportunity to marry Prince Eric.

While Ursula clearly has evil intentions behind her deal with Ariel, there are few villains who would create a contract with the heroes. Ursula approached her evil scheme from a very legal standpoint, so it's hard to fault her.

Shere Khan is the most feared animal in the jungle, but the thing he fears most is humans. So when a young boy named Mowgli is raised in the jungle by wolves, Khan sees him as a threat that must be eliminated.

RELATED: Disney: 10 Villains That Would Be Impossible to Create Today

While Shere Khan seems like a powerful beast when put up against a child like Mowgli, his fear is justified. Humans no doubted hunted animals in the jungle for many years and perhaps even tried to kill Shere Khan. With his limited knowledge of humans, he likely thinks Mowgli will grow into a killer as well.

For years, the Queen in Snow White and the Seven Dwarfs was assured that she was the most beautiful woman in the kingdom. However, one day she learns that a young girl named Snow White has taken that title from her and threatens her power.

For this woman to rise to such a place of power would not have been easy, so it makes sense that she would want to hold onto it no matter what. Also, society does not make aging easy for women, so the queen's insecurities are understandable as well.

With Captain Hook being a grown pirate man who is trying to kill young Peter Pan, it doesn't make him seem like a very sympathetic guy. But as young as he appears, Peter is a seasoned warrior who has been doing battle with Hook for years.

In one of their fights, Peter cut off Hook's hand and fed it to a crocodile. That's pretty sadistic, especially for a child. An act of cruelty like that seems to suggest Peter isn't taking this rivalry lightly, so why should Hook?

At first glance, Yzma in The Emperor's New Groove seems like another power-hungry schemer. She works as Emperor Kuzco's advisor until she is fired. She then plans to poison him and usurp the throne.

RELATED: Which Disney Villain Are You Based On Your Zodiac Sign?

Obviously, the whole murder plot is wrong, but Yzma is absolutely not wrong for wanting to remove Kuzco from power. He is a spoiled and selfish leader who doesn't care about anyone but himself. He is likely a threat to the entire kingdom and things would probably be better with Yzma in charge.

Maleficent is another powerful witch who seems to be motivated by nothing but the joy of being evil. She arrives at the christening of the new royal daughter, Aurora, angry about not being invited, and proceeds to curse the child.

Being a social outcast is no fun at all. Maleficent is the most unpopular person in the kingdom and that has to take a toll on a person. She clearly took the insult too far but if everyone would have just been nice and invited her, none of this would have happened.

When Andy is heading off the college, his toys begin thinking about what their future will be. They decide to head to a local daycare where they can be played with forever by kids. However, the paradise isn't what it seems as it is ruled by a teddy bear named Lotso who forces new toys into the worst situations.

Yet underneath his seemingly evil demeanor, just like Andy's toys, Lotso is afraid of rejection. He was once a beloved toy who was accidentally abandoned. After going through hell to get back to his kid, he found that he had been replaced.

Vampire Diaries: What Creature Are You Based On Your Zodiac?

I have no ideia