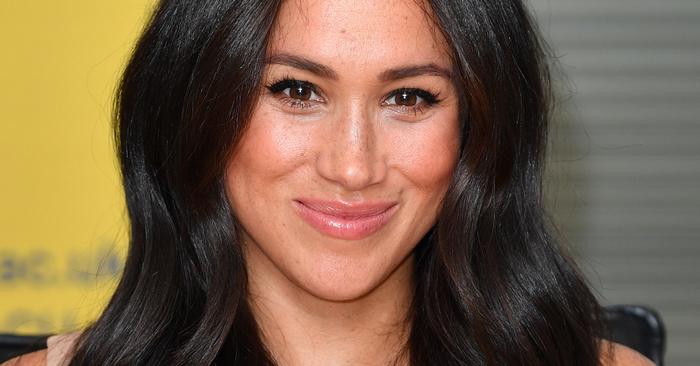 Ever since Meghan Markle married Prince Harry in 2018, countless changes have befallen her life. Aside from the whole becoming royalty thing, the sartorial swaps alone were enough to make us do a double-take. It's no surprise that in addition to the lengthening of her hemlines, Markle's beauty wardrobe has gotten a touch of royal refinement, too. Messy ponytails? Never. Dark nail polish? Not without outrage!

Now that the Duke and Duchess of Sussex have announced their plans to "step back as 'senior' members of the Royal Family" and end their full-time residence in the UK, it seems only natural that many of the stringent royal rules they've been adhering to will fall by the wayside. As you can imagine, the rumor mill is already swirling about the pair's next professional move, where they'll take up residence (signs are pointing to Canada), and what all of this will mean for the rest of the British royal family. But, being the beauty fanatics we are, we can't stop thinking about all the beauty looks Markle will be free to experiment with now that she won't be taking on as many official royal duties.

Without the watchful eye of the often harsh (and arguably biased) British tabloids breathing down her neck, we think this time might mark a decidedly more adventurous beauty period for the American-born duchess. (At least we hope so!) Ahead, check out the 10 most exciting beauty trends Meghan Markle can wear freely now that we'd be so excited to see.

4 New Color Trends That Are Bubbling This Month

5 Brands I Wore Before I Became a Fashion Editor—and Still...

This Is How Fashion Girls Are Styling Their Hair Right...

It's True—This Is the Reigning Champion of Summer Denim...

Steer Away From Car Trouble With These Must-Have Gadgets

75 Days Later and This Is What Our Office Is Wearing While...