If you loved Disney's Pirates of the Caribbean, we've got the next few swashbuckling adventure comedies that you should watch next. 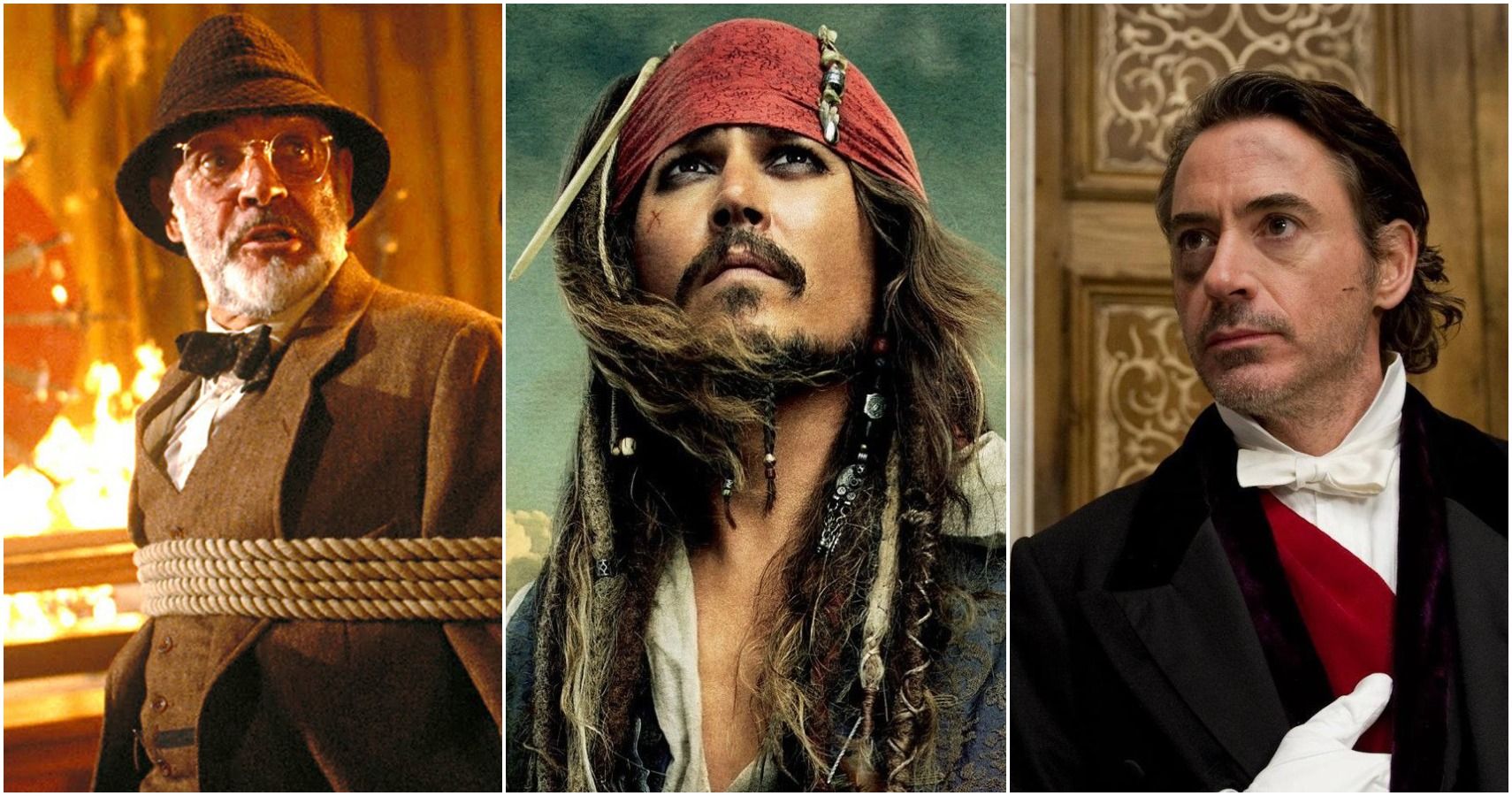 There was a time when the films ruled the box office, and it was a given that a new entry would go on to become a blockbuster. These films were preceded and followed by a number of similar features as well, though, and if you’re jonesing for a lot of adventurous fun, then this list is for you.

We’ve taken into account the blend of comedy, action, among many other things that can be found in the Pirates of the Carribean series to bring you the collection of these films. The backdrops may vary for these movies, but the entertainment value is definitely to be found here.

Updated by Saim Cheeda on 12th May 2020: With blockbuster film releases at a standstill due to the mass delays related to COVID-19, fans have had no choice other than revisit older movies. This means there are far more options they would want to choose from, and they tend to cast the net wide.

Surprisingly, a lot of films still haven’t been seen in the swashbuckling genre, which is a shame since this genre remains so popular. Since fans have streaming services like Netflix, it’s worth checking out further movies that have a resemblance to Pirates of the Caribbean’s style. That said, this list has been updated for this purpose.

When Professor Moriarty finally reveals his manipulations from the shadows, Sherlock Holmes and Dr. Watson join forces again to bring him down. However, Moriarty might prove to be far too cunning for them, as the heroes go to great lengths to stop a world war.

The sequel is far more of road film than the original, and Pirates of the Caribbean fans will relate to the constant backdrop changes as the protagonists go from one place to another. Of course, their relentless banter will also serve to entertain most as these two bicker like a married couple, providing comedy to all the action.

Just when it seems Indiana Jones can’t have more trouble than what he usually picks up, he learns that his father has been abducted by Nazis. While looking to rescue the senior Jones, Indiana also stumbles upon the search for the Holy Grail.

It has the same energy that earlier installments did, yet Indiana Jones and the Last Crusade has more entertainment value due to the chemistry between the titular character and his father. The family dynamic makes for wonderful pieces of dialogue, while the action-adventure aspect is far more intelligent this time around.

In Ancient China, the powerful Monkey King is trapped by the power-hungry Jade Warlord. However, the former hides away his fabled staff for the rightful owner to find. Centuries later, a teenager happens to come across this weapon which sends him back to the past on a journey to return the staff to the Monkey King.

With Jackie Chan and Jet Li as the main draw, could anything really go wrong? Filled with incredible action set pieces, The Forbidden Kingdom is pure blockbuster entertainment. Along with that, fans will love the dynamic that forms between the dysfunctional group of protagonists in this magical setting.

At the turn of the nineteenth century, Van Helsing is deployed to Transylvania to end Count Dracula. However, Van Helsing learns that Dracula’s schemes not only threaten the entire world, but also link back to his own past.

Its premise might sound a bit dark, but Van Helsing is filled with enough comedy to make it a light-hearted gothic adventure. The visuals still remain absolutely gorgeous, and the fast-paced style of the story means that the action never stops right from the opening minutes.

A gallant boy is adopted by a king for his bravery, becoming a prince of Persia. As a man, he is framed for the death of his father by his evil uncle and hunted for this crime. Realizing he can use an enchanted dagger to turn back time, the prince goes on a quest to set the timeline right.

Considered as one of the best video game-based movies, has a fun feel to it right from the start, as the story shifts from one location to another with the prince picking up new friends along the way.

In the Old West, a mismatched duo are tasked by the president to rescue kidnapped scientists by a man who has sinister intentions to use a weapon like none other. Unfortunately, their constant bickering makes things harder than predicted.

While it’s known today to be the film that Will Smith chose over starring in The Matrix, Wild Wild West is actually a pretty fun film. The chemistry between the lead pair is hilarious, and watching them trip and stumble toward becoming heroes is silly fun.

In the early adventures of Han Solo, the smuggler’s background is explored as we see how he rose up the ranks to meeting his trusted friends and establishing his name across the galaxy. We find more than a few surprises in this origin story.

Having a central comedic theme is something didn’t attempt before , and it made for a worthy attempt as the film has a charming cast who make Han’s see-saw journey worth a ride. Its links to the main series also serve up plenty of Easter eggs.

After giving up his memories of Neverland and his time as the leader of the Lost Boys, the adult Peter is swooped back into his former life when Captain Hook resurfaces. Faced with finding the inner child in himself again, Peter reunites with his old friends for a final adventure.

RELATED: Pirates Of The Caribbean: 5 Reasons The Franchise Deserves Another Chance (& 5 Why Disney Should Let It Die)

In one of Robin Williams’ more beloved films, regardless of critical opinion, Hook serves up both nostalgic value and a bag of laughs. It’s a well-meaning film whose adventurous spirit transcends its relatively simple premise.

Thousands of years in the past, the mercenary Mathayus undergoes a perilous journey to bring down a brutal ruler and avenge the death of his brother. As he completes his mission, he sets in motion the events that lead to him becoming the Scorpion King.

The first leading role for The Rock in Hollywood, this film captured the spirit of the fantasy-adventure genre, being an entertaining romp through dangerous obstacles. Bringing his trademark comedic talents to the forefront, The Rock shows us why he’s such a draw for audiences by excelling in all departments.

A vigilante dons the identity of Zorro, a moniker passed down to him by the original in order to gain revenge on the evil governor responsible for the death of his father. As he goes through with his plans, he learns the meaning of what makes one a hero.

Before superhero movies and TV series were all the rage, The Mask of Zorro gave audiences a taste of swashbuckling entertainment. Its character development is a thing of its own, supplemented well by the many action-packed moments that have a genuine feel to them.

A boy is told an extraordinary tale of love, friendship, and adventure by his grandfather. This story sees a common man go up against an evil prince to save the one he loves, complete with fantastical elements and new comrades.

Considered a classic in cinema, The Princess Bride is a film where you can not go wrong, as it features characters of all kinds with their own blend of comedic wit. The style of the movie is one that accommodates older and younger viewers, and its whimsical nature makes it an evergreen watch.

After his father is killed by his evil uncle, Arthur goes on a journey to reclaim his right as king, starting with becoming the master of the fabled sword Excalibur. With his uncle having powers of his own, Arthur prepares to fight for his legacy.

RELATED: Pirates Of The Caribbean: 5 Ways The Franchise Aged Perfectly (& 5 Ways It Did Not)

It’s a shame this film slipped under the radar, as it was planned to be the first in a six-film series around King Arthur. Unlike the dire theme the trailers made it out to have, the movie actually is pretty breezy fun featuring a tried-and-tested format that viewers enjoy.

An adolescent with a thirst for adventure is taken aboard a massive literal ship in space, he finds himself joining the alien crew venturing across galaxies seeking danger. However, the long-sought Treasure Planet brings with it peril and betrayal in the journey.

A film that takes its adventurous tone and runs with it, Treasure Planet is the unorthodox film you want since the genre usually has a set format, something that is averted here. With dazzling visuals and a futuristic twist in the pirate genre, you’ll find this to be an underrated gem.

In the past, a young man from the town of Wall ventures across the barrier separating his people from the magical land in order to collect stardust to impress his crush. Along the way, he finds out the star happens to be a beautiful girl, who’s hunted by everyone from witches to the kingdom’s princes.

It’s a more feminine take on the swashbuckling genre, which only makes Stardust all the more charming. There are pirates, magical beings, romance, and quirky action for fans to enjoy. Another draw are the major stars involved in the film, whose performances round out what is a heartwarming adventure flick.

Siblings Evie and Jonathan enlist the help of adventurer Rick O’Connell, in order to uncover the City of the Dead. Unfortunately, they end up accidentally releasing a horrifying Mummy who brings in a cursed plague. Faced with no choice, the heroes step forward to stop this evil creature from taking over the world.

A lot of the success of the adventure genre belongs to , which revived interest in the industry for these films. The film combines comedy with action, and even horror, in a way that makes for a delightful feature that has incredible replay value and loads of nostalgia factor.