In this episode of MC Commute, we cut the 2021 Honda CBR1000RR-R Fireblade SP loose on the daily grind to the Motorcyclist offices. 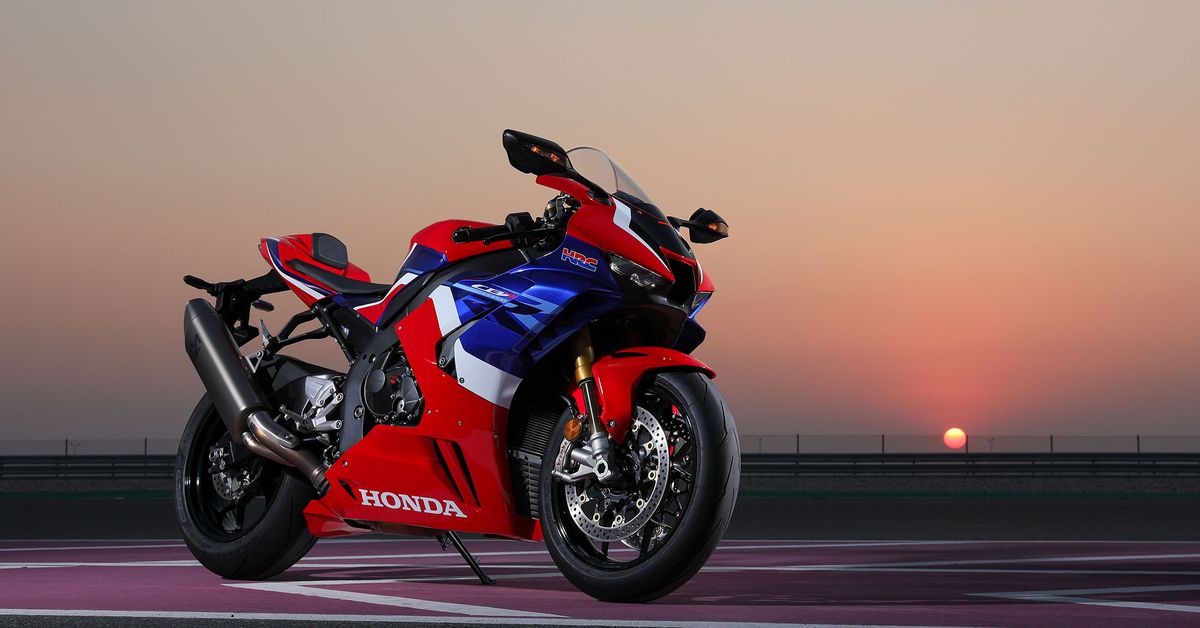 The modern-day superbike segment has become increasingly track focused within recent years. Nearly every manufacturer with skin in the game has created a homologation-special model built to push the envelope of production-level performance on the racetrack. The 2021 CBR1000RR-R Fireblade SP is Honda’s latest entry into the category. 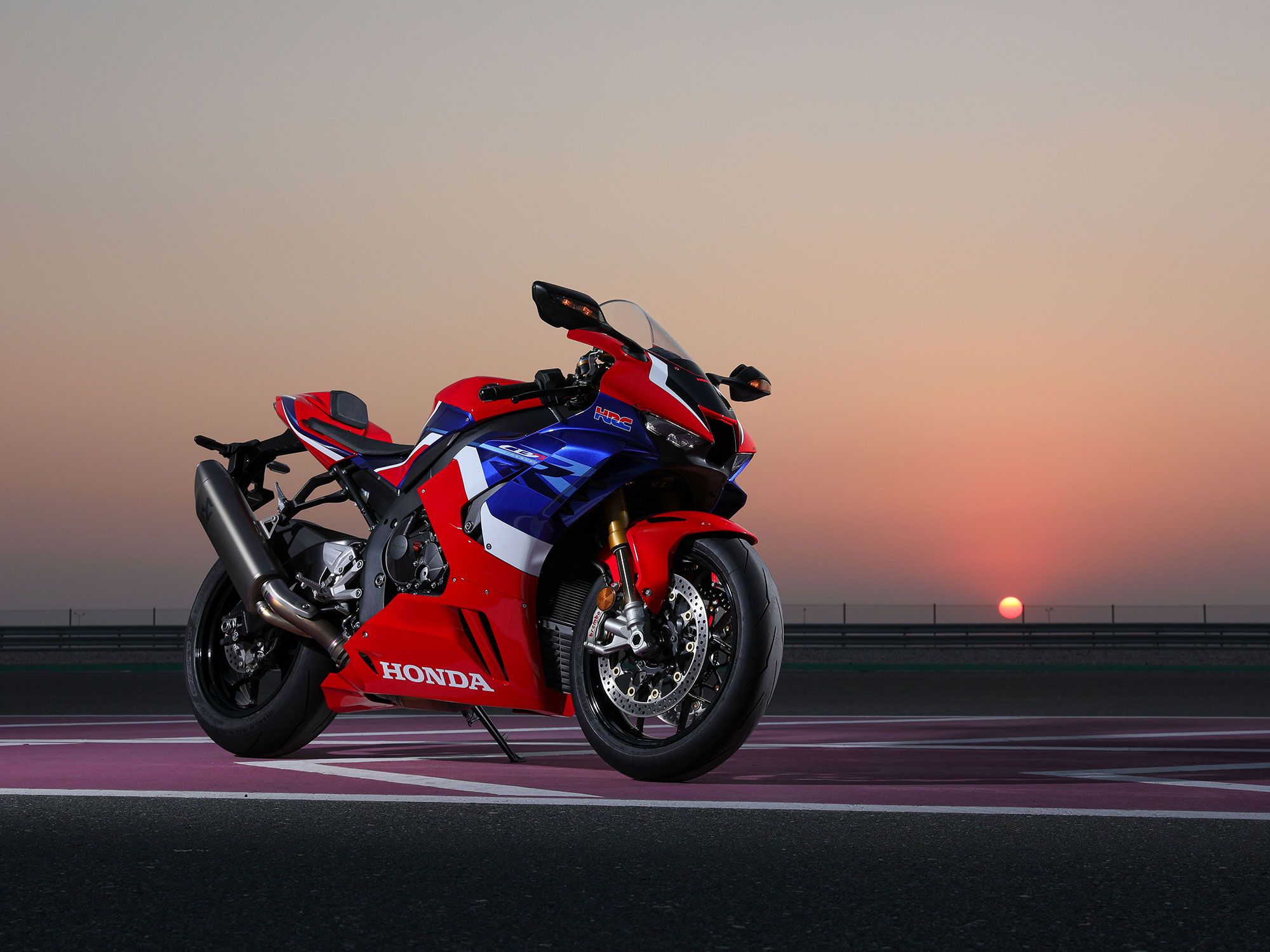 In this episode of MC Commute, we take the 2021 Honda CBR1000RR-R Fireblade SP for a spin to the Motorcyclist offices. (Honda/)

But while built to conquer World Superbike competition, each of these machines are deemed road legal and available to purchase by the average consumer. And we’ve got a commute to the Motorcyclist offices to do. So why not let the Fireblade loose on public roads?

Editor’s note: We’ve covered the Fireblade SP’s racetrack performance in the and special edition at Thunderhill Raceway Park. This article describes our experience of the Honda on the day-to-day street grind.

Thumbing the starter button on the right-side handlebar brings the Fireblade SP to life, barking out an exciting inline-four growl from the OE-equipped Akrapovič exhaust. Honda’s deep-rooted racing heritage is obvious while settling into the cockpit. The rider triangle is tight and aggressive, as you’d expect on a racetrack-focused machine. Footpeg position is placed up and back resulting in an aggressive lower-body stance, while the clip-on handlebars are pushed forward into a flat, wide position that’s awkward for our 5-foot-7-inch tester. It’s a tiresome position for the daily commute, but a favorable stance to hustle the CBR through the backroads or around the racetrack. 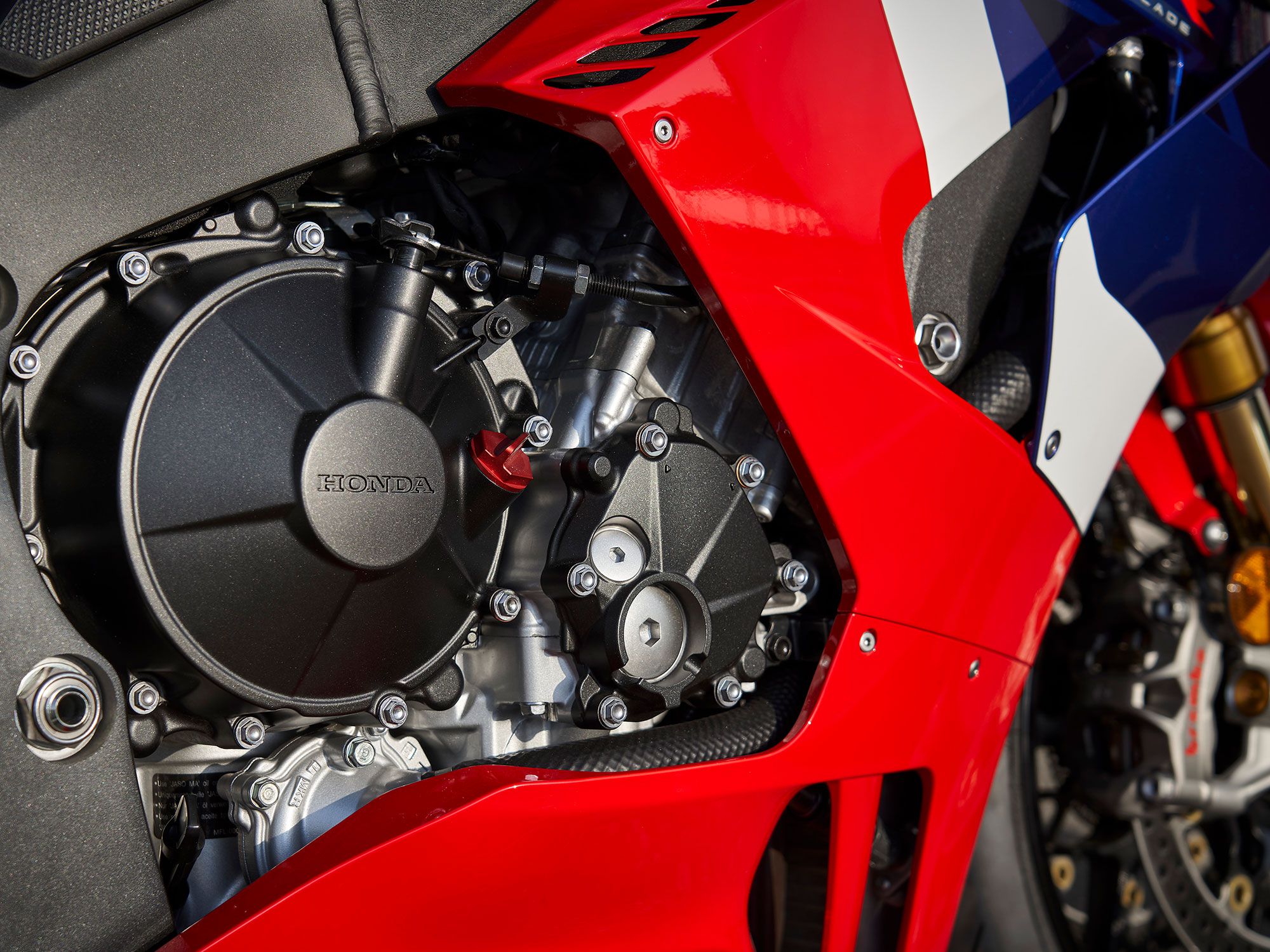 The Fireblade SP is powered by a 999cc inline-four that’s worthy of an addicting 165.4 hp on the Motorcyclist dyno. Not to mention the exciting punch in power above 7,000 rpm! (Honda/)

At the heart of the Fireblade SP is a 999cc inline-four engine with serious inspiration from Honda’s RC213V-S MotoGP replica racer, right down to the bore and stroke configuration and finger-follower valve train. Prior to real-world testing, we first ran the CBR on our in-house Dynojet 250i Motorcyclist dyno, recording horsepower and torque measurements. The Fireblade recorded a peak 165.4 hp at 12,000 rpm and 74.6 pound-feet of torque at 10,600 rpm, with an incredibly linear power delivery from 7,000 to 12,000 rpm before reaching its 14,200 rpm redline. 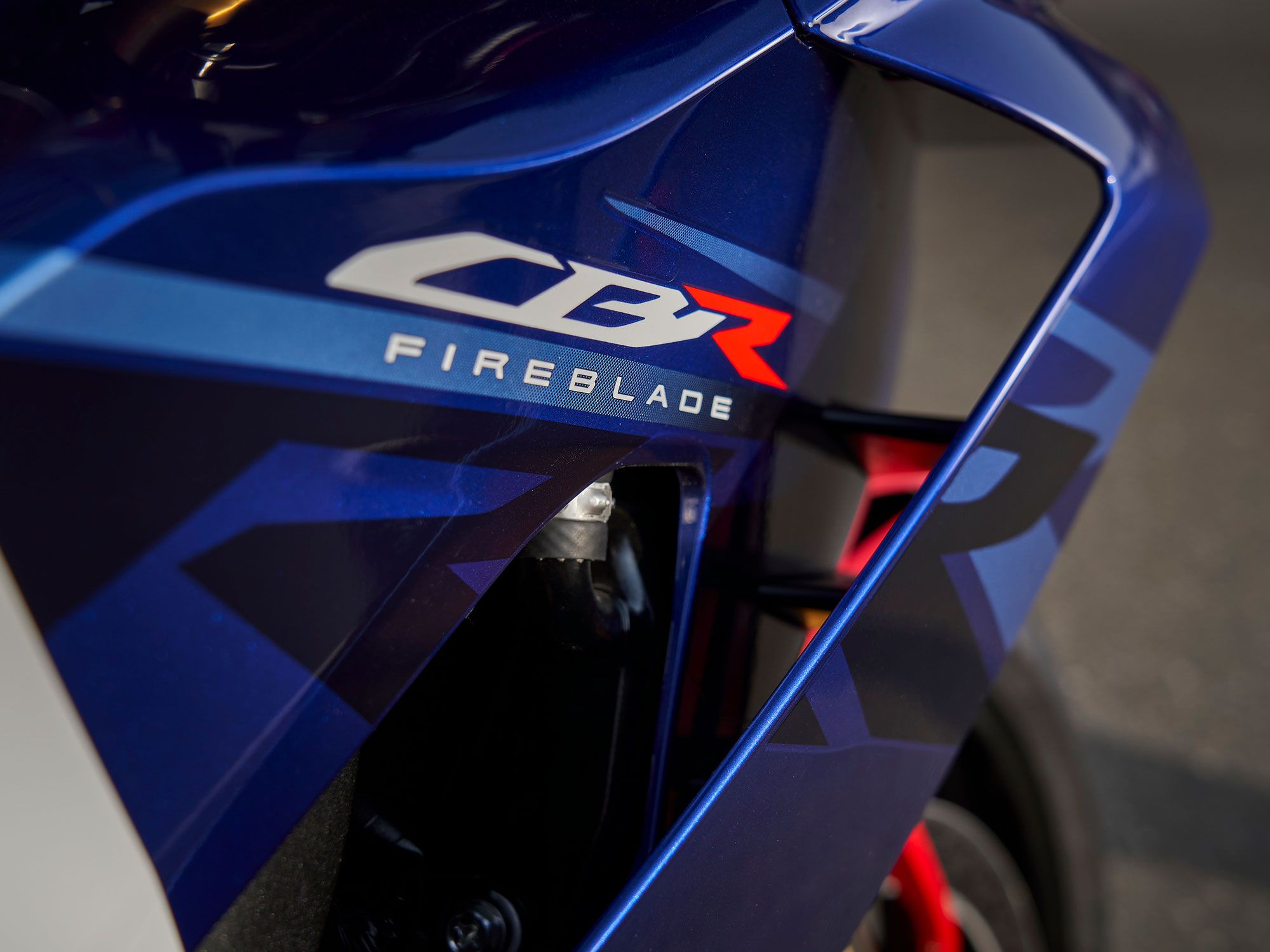 Winglets! Talk about MotoGP inspiration. Honda claims these have been taken directly off the 2018 RC213V prototype race machine for improved downforce at the front wheel. (Honda/)

The high-revving race tune of the CBR is addicting, if you can keep it spinning above 7,000 rpm. A strong hit of power lifts the front wheel off the tarmac, while the three-level wheelie control system keeps it in low-flight trajectory as the CBR accelerates away from a stop or curve. The bidirectional quickshifter makes for near-seamless gear changes through the Fireblade’s six-speed gearbox. It’s a remarkable experience that keeps the daily commute so entertaining. This titanium Akrapovič exhaust adds to the premium feel of the Fireblade SP. (Honda/)

Handling is delightfully neutral for being a superbike too. The Fireblade tips the Motorcyclist scales at a ready-to-ride 445 pounds. Little body language is required to flick the Honda to its side, but remains composed in every case. It’s sharp, and quickly carves corners. The semi-active Öhlins NPX fork and TTX 36 shock do a superb job of finding a balance between supple small-bump compliance for county road imperfections and big-hit support for the G-out sections of twisties. Three settings are available for semi-active damping changes—Track, Sport, and Rain—with each targeted for specific riding situations. Manual settings, which freeze damping changes and act as conventional suspension, are also available. Brembo Stylema brake calipers and radial master cylinder bring the Fireblade to a quick halt with excellent feel. 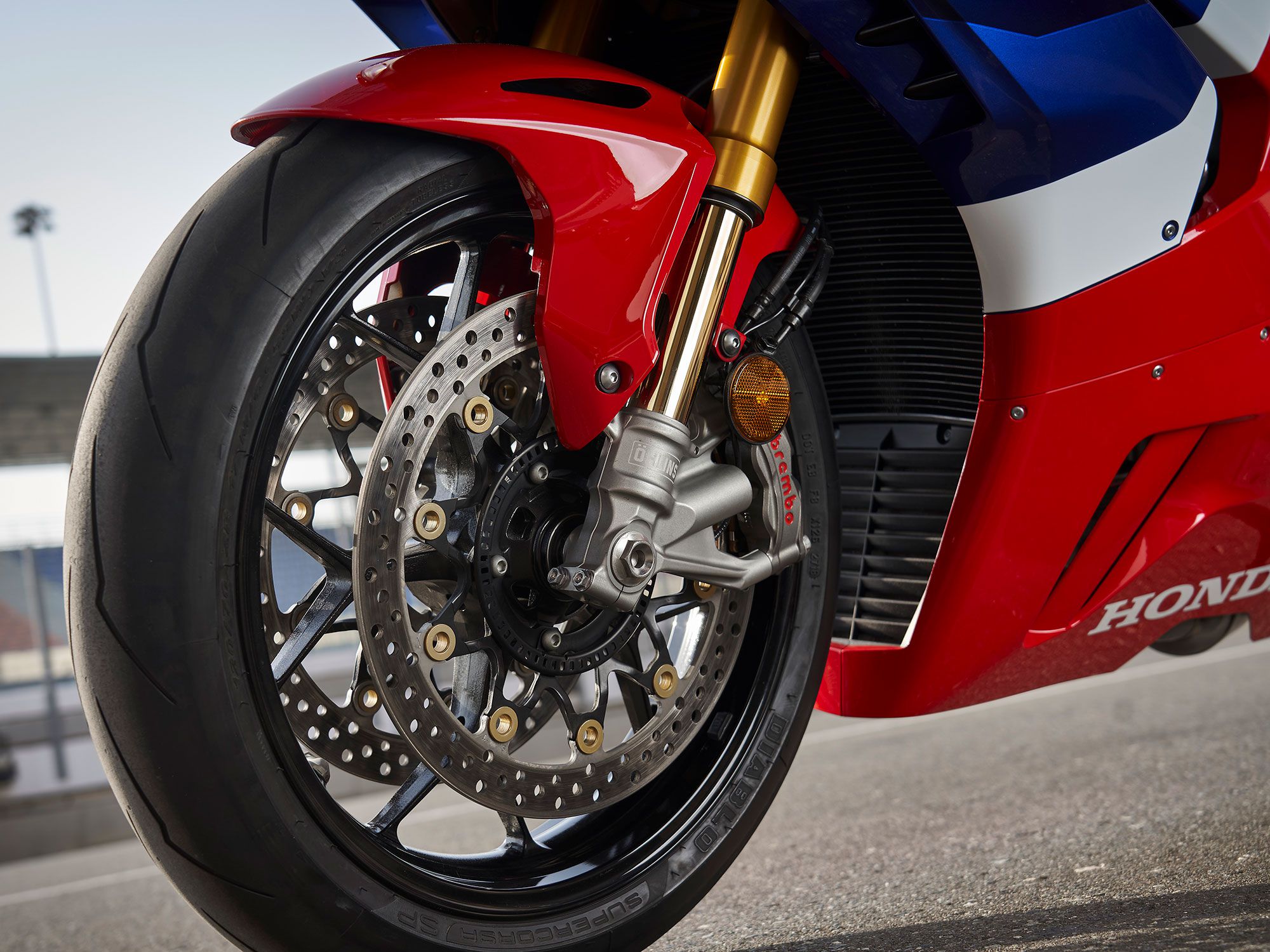 Honda fitted the CBR with a set of top-shelf Brembo Stylema calipers and 330mm discs to bring it to a quick halt. (Honda/)

Perched behind the handlebars is a 5-inch TFT dashboard, displaying all vital riding information and access to the Fireblade’s electronic rider-aid suite, including the aforementioned wheelie control and suspension settings, as well as adjustable traction control, engine power, and ABS functions. A larger display would be appreciated, while an easier menu navigation would reduce headache. The fairing offers sufficient wind protection in a relaxed riding position and a calm pocket of air while tucked in. 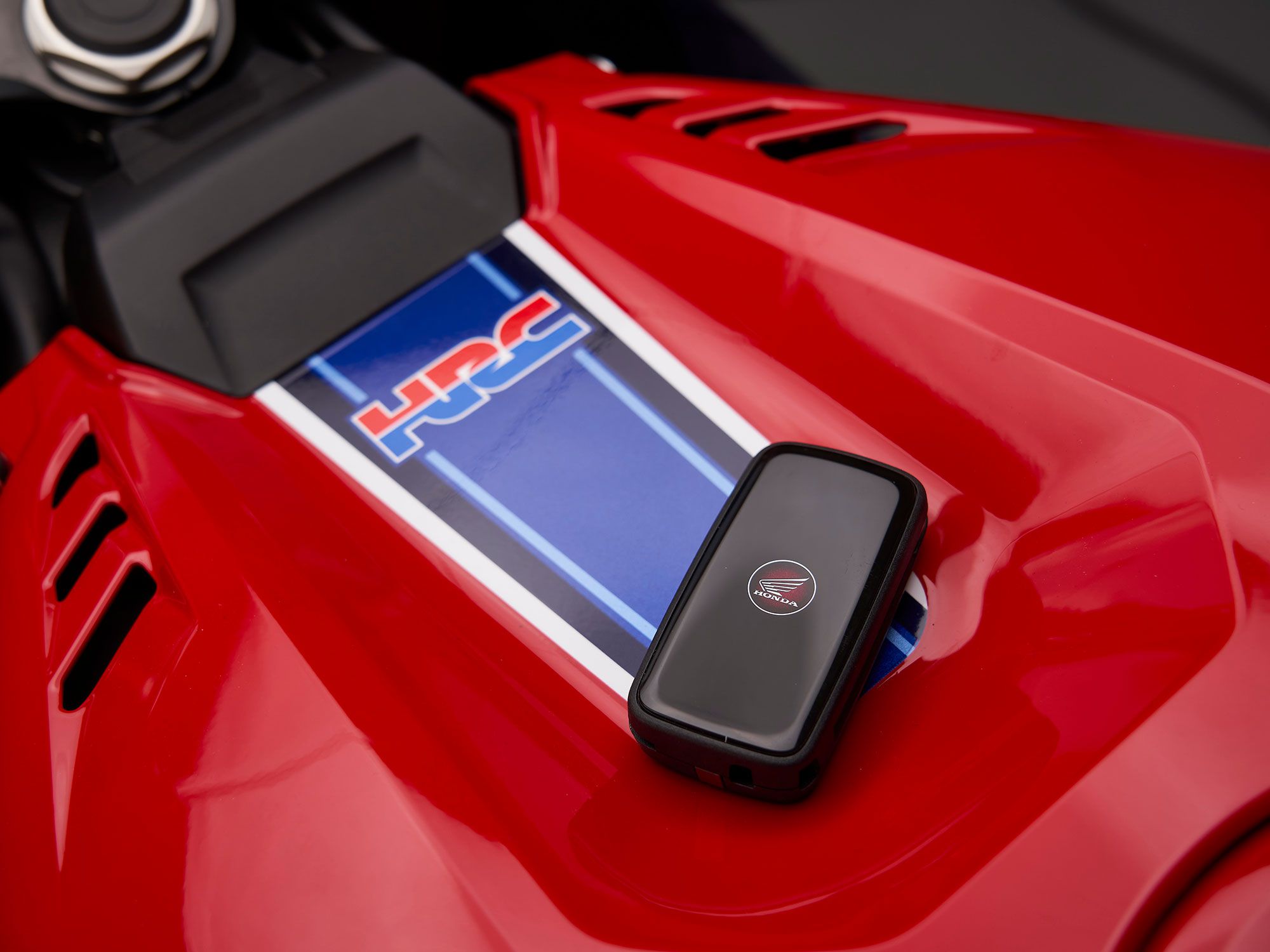 The Fireblade ditches the traditional key for a remote fob, which can become a nuisance. Pro tip: don’t walk away for a photo stop with the ignition left on! (Honda/)

The Honda CBR1000RR-R Fireblade SP undeniably belongs to the racetrack. Sharp handling, strong power delivery, the latest electronic rider aids combine for ultimate superbike potential. But that’s not to say the Honda won’t offer a ripper of a commuter machine. You might just hope that the commute ends at the nearest race circuit. A set of Öhlins NPX Smart-EC forks with semi-active damping functionality offer a super balance of feel and comfort. (Honda/) 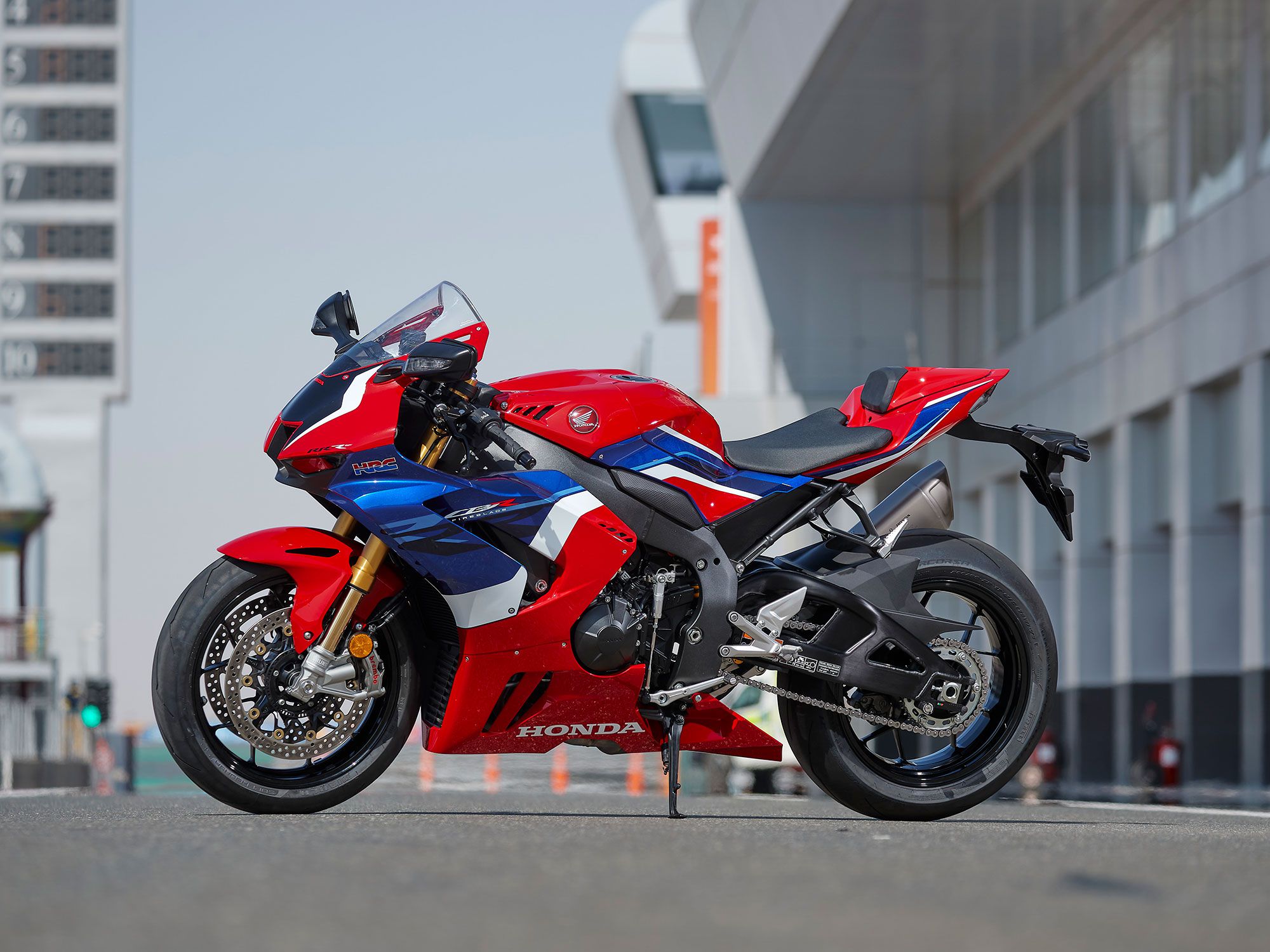 Future BMW 2 Series Active Tourer could look like this