The 2021 Moto Guzzi V7 maintains its traditional and unique design, but a new engine, chassis, electronics, etc. improves the package. The transverse V-twin and the overall styling of the Moto Guzzi V7 is iconic. Now that V-twin sees a boost in power that makes it even more capable. 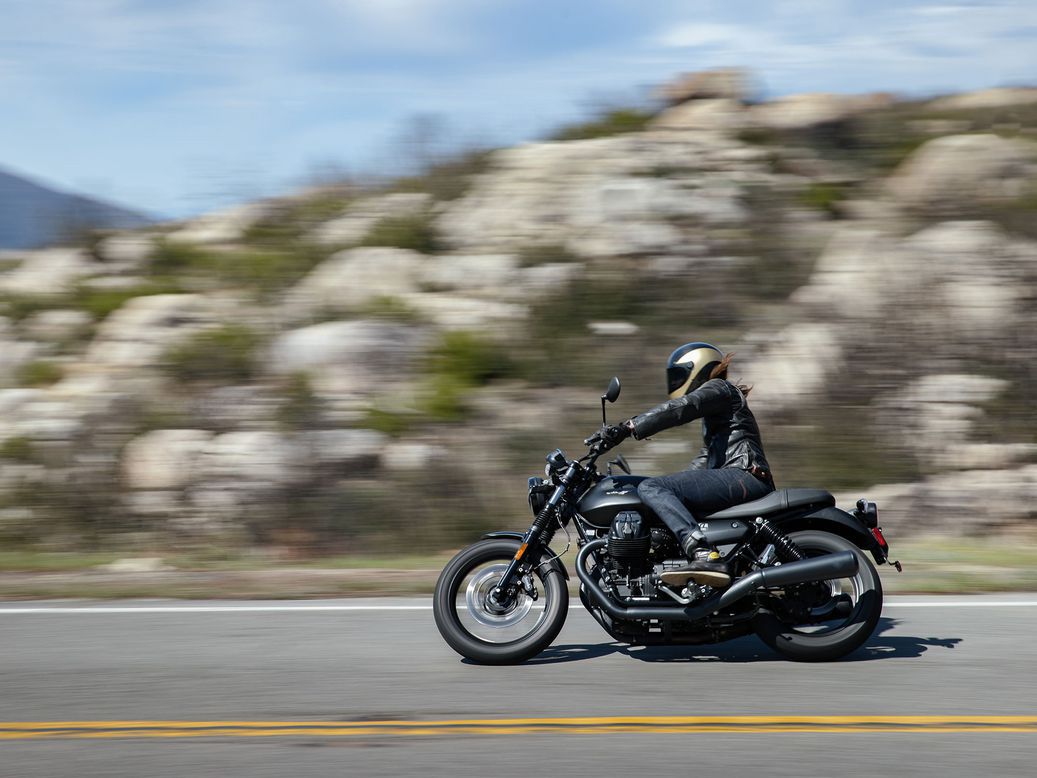 One hundred years is quite a milestone, and Moto Guzzi is celebrating with a limited-edition version of its V7 Stone as well as an expansive list of changes, which includes a boosted transverse V-twin. Its engine’s transverse configuration is iconic to Moto Guzzi and the bike’s lines are distinct and good looking. It is a friendly V-twin that fits in the growing retro standard category.

Many updates are seen on the latest V7. First thing you may notice is Moto Guzzi dropped the Roman numerals at the end of the name, so it is now known simply as the V7 Stone or V7 Special. One of the major mechanical changes is the switch to the larger 853cc engine and revamped gearbox. This engine has many other internal changes which include: a more rigid crankcase, new lubrication system with a semi dry sump, and shorter cylinders.

The electronics suite sees some changes to a full LED lighting system, debuted on the Stone, as well as a new instrument cluster. 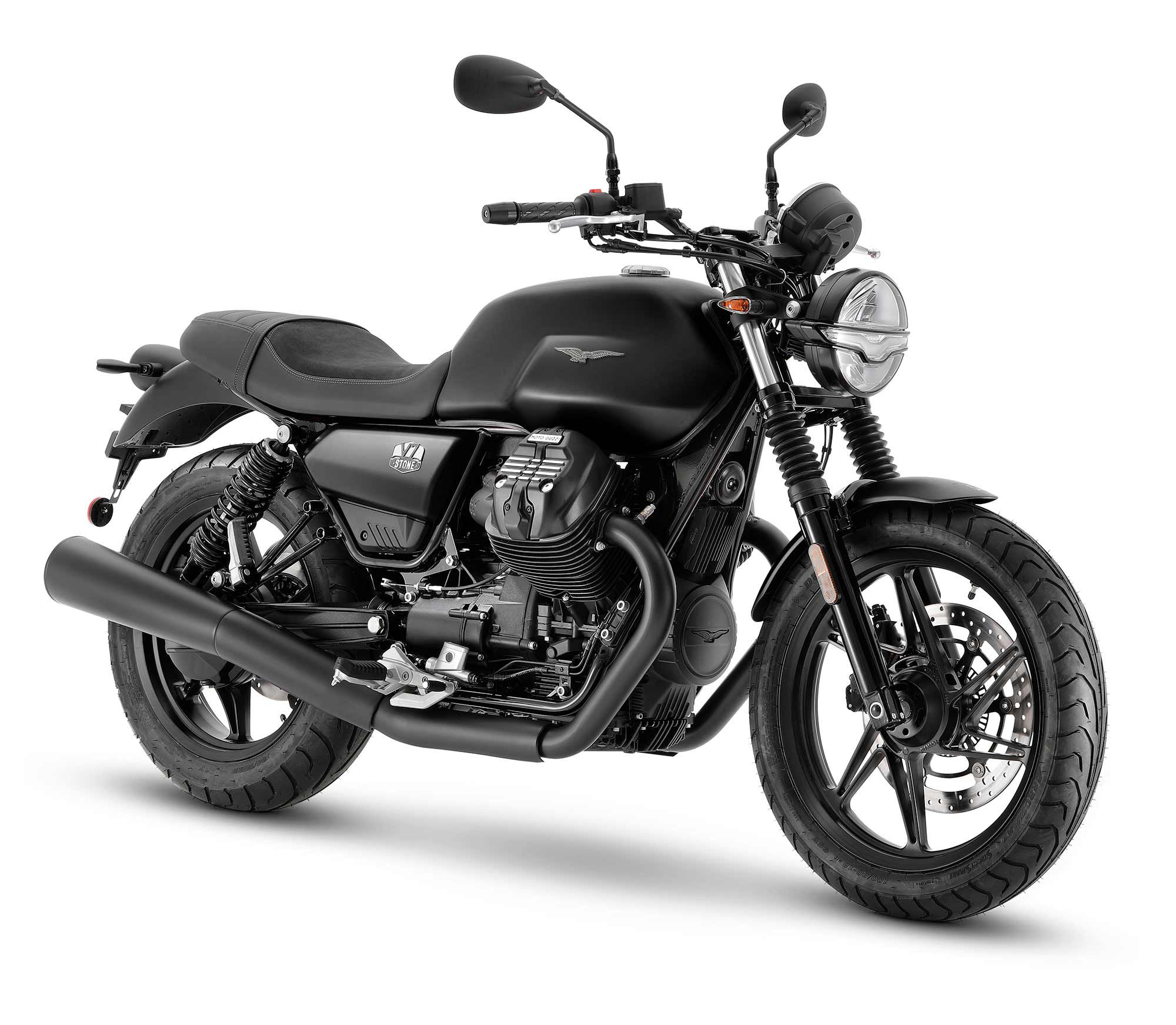 The Stone comes in the Nero Ruvido color scheme as well as the new Azzurro Ghiaccio, Arancione Rame, and limited edition Centenario livery. The Special is available in two options: Blu Formale and Grigio Casual.

The Guzzi’s direct competition is Royal Enfield’s INT650. Seeing as it received a boost in displacement, its competition also includes the Triumph Street Twin and even Harley-Davidson Sportster 883. 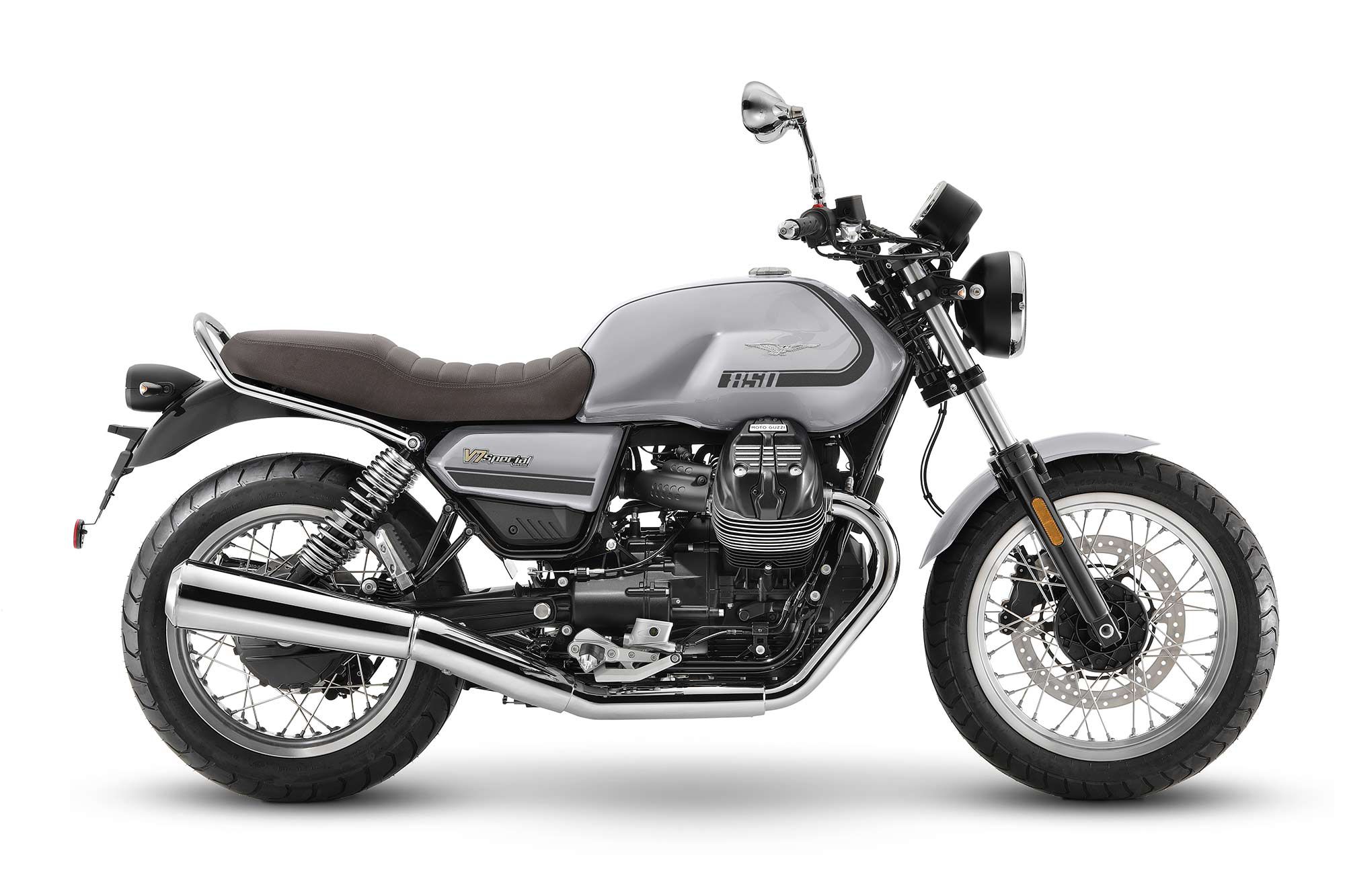 The V7 has housed a 750cc V-twin since 2009, but now the model boosts up to the air-cooled 853cc V-twin while maintaining the classically Moto Guzzi transverse configuration and meeting Euro 5 emissions standards. A six-speed gearbox and shaft drive work with the engine to deliver the power; the manufacturer claims 65 hp at 6,800 rpm and 53.8 pound-feet of torque at 5,000 rpm. A vague clutch feel and abrupt fueling are a few criticisms that test rider Morgan Gales noted in his review of the new V7.

Gales also commented that the pull-to-the-right effect still occurs, but the tug has been reduced to a minor sway. The increase in power is welcome as it makes the new bike “a much more capable machine,” Gales continued. “Most of that power comes on after the 3,000 rpm mark, but the engine produces tiring vibration through the handlebars at the same point; this does not smooth out until it reaches peak torque at 5,000 rpm.” 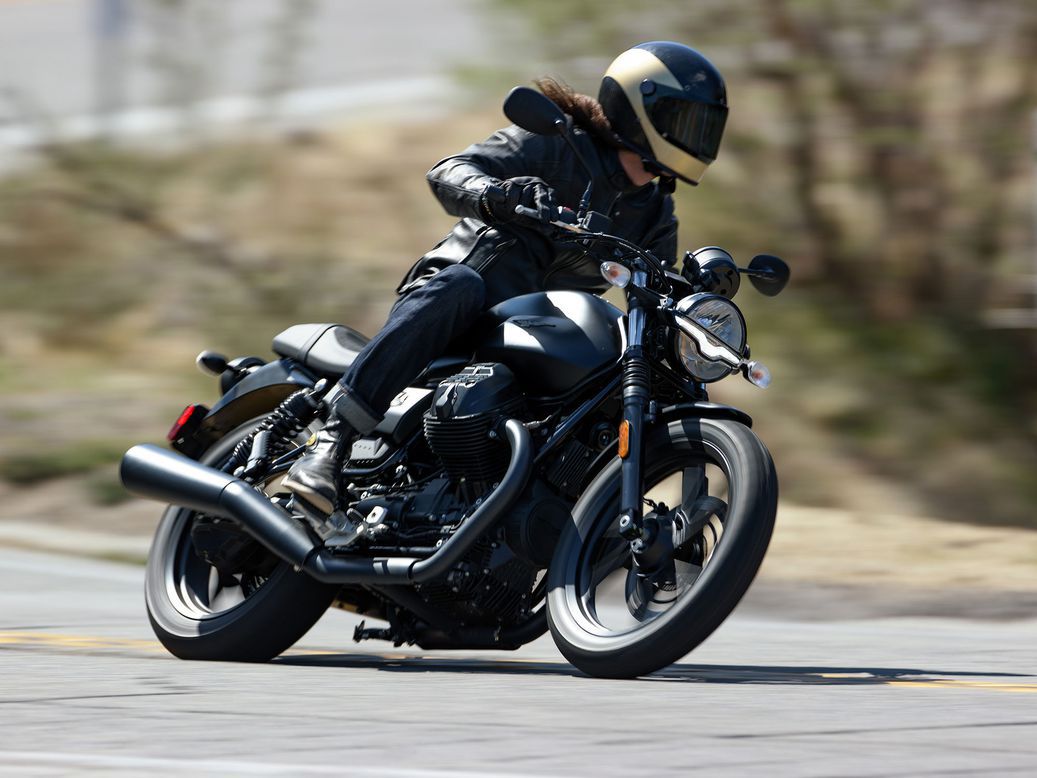 Handling is very neutral. It drops into turns, handles low-speed maneuvers easily, and is stable on the highway. When pushed hard, however, Gales noted that the bike bobs due to the soft suspension. Adjusting the preload at the dual shocks alleviates much of the problem there, but the 40mm fork is nonadjustable.

Braking on the V7  is done with a 320mm front disc and four-piston Brembo caliper and 260mm rear disc and two-piston caliper.

The front lever needs a fair squeeze, but it provides good feel for precise application, writes Gales. The rear setup is not too grabby and also has good feel. 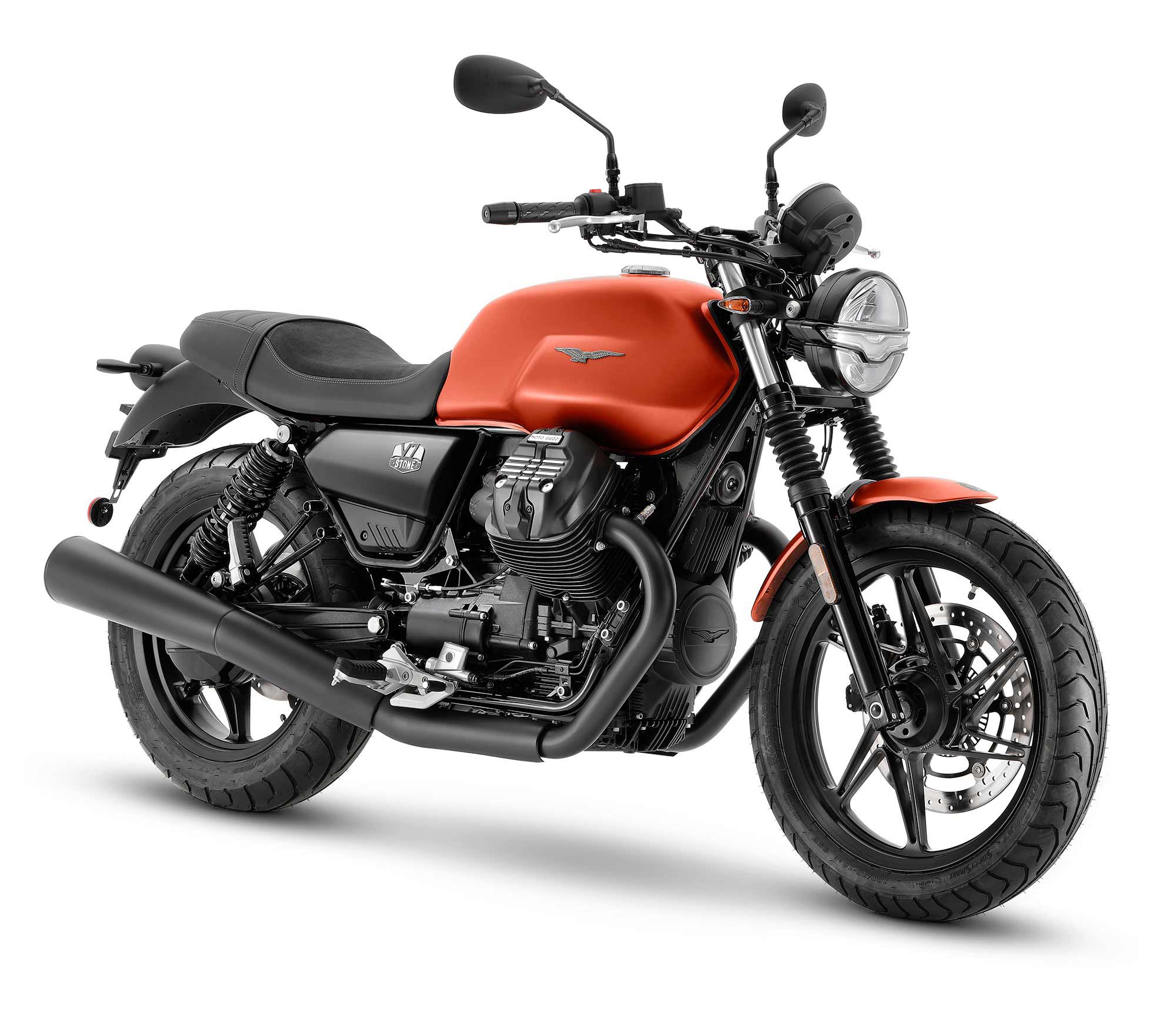 The manufacturer claims the V7 makes 4.9 liters/100 kilometers which equates to about 48 mpg from the 5.5-gallon tank.

At a tall 6-foot-4, Gales found the riding position to be comfortable with an upright body position. 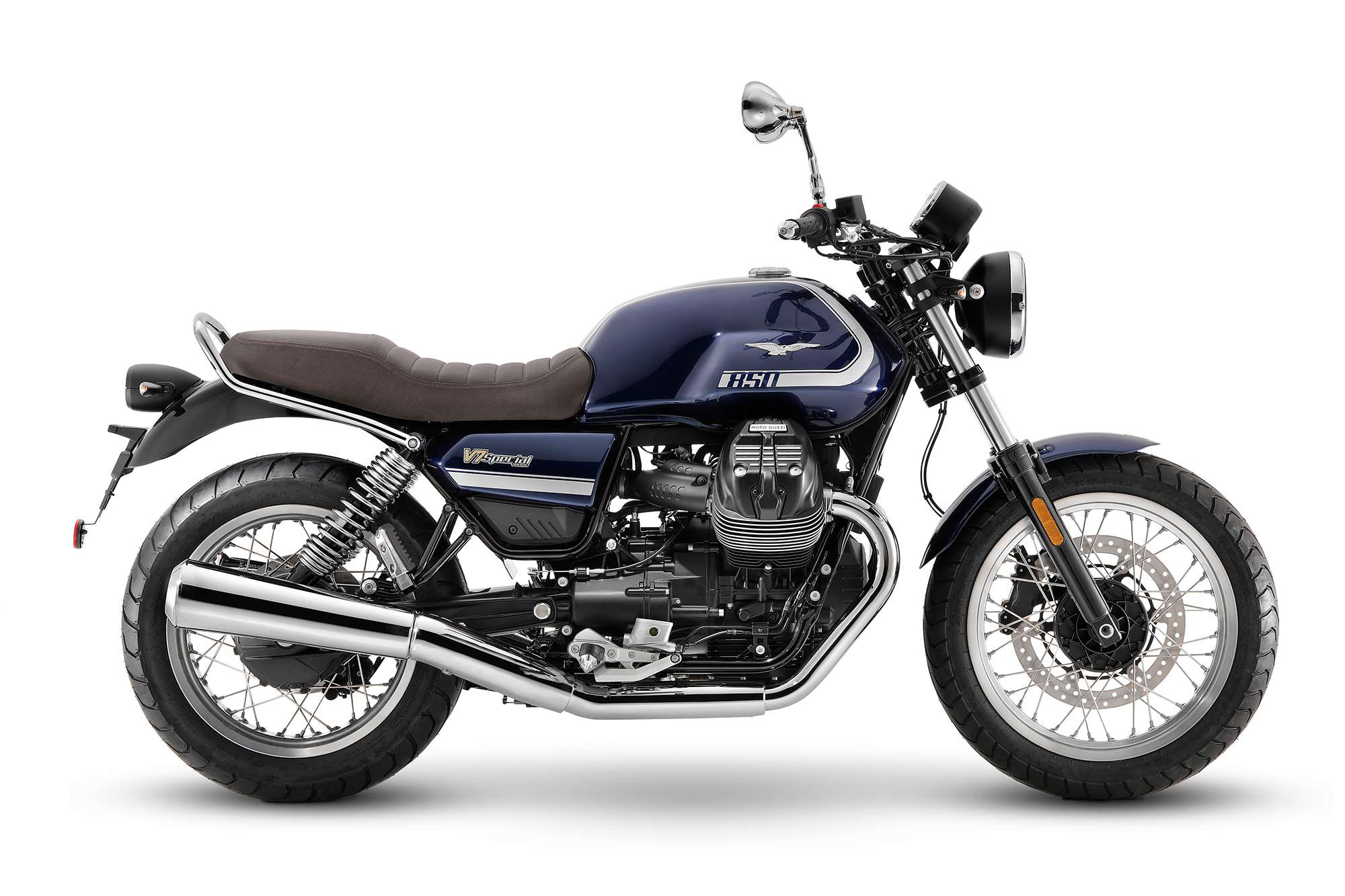 In addition to the LED lighting, the V7 is equipped with two-channel ABS, and Moto Guzzi Traction Control (MGTC). The latter has two sensitivity levels to choose from and can also be calibrated to rear tire circumference in case the rear tire is swapped.

The Moto Guzzi V7 has a two-year unlimited-mileage warranty.

Moto Guzzi carries over beautifully polished styling year after year, and this current model is no different. We love its lines and style. Small details from the eagle silhouette daytime running light complete the look. 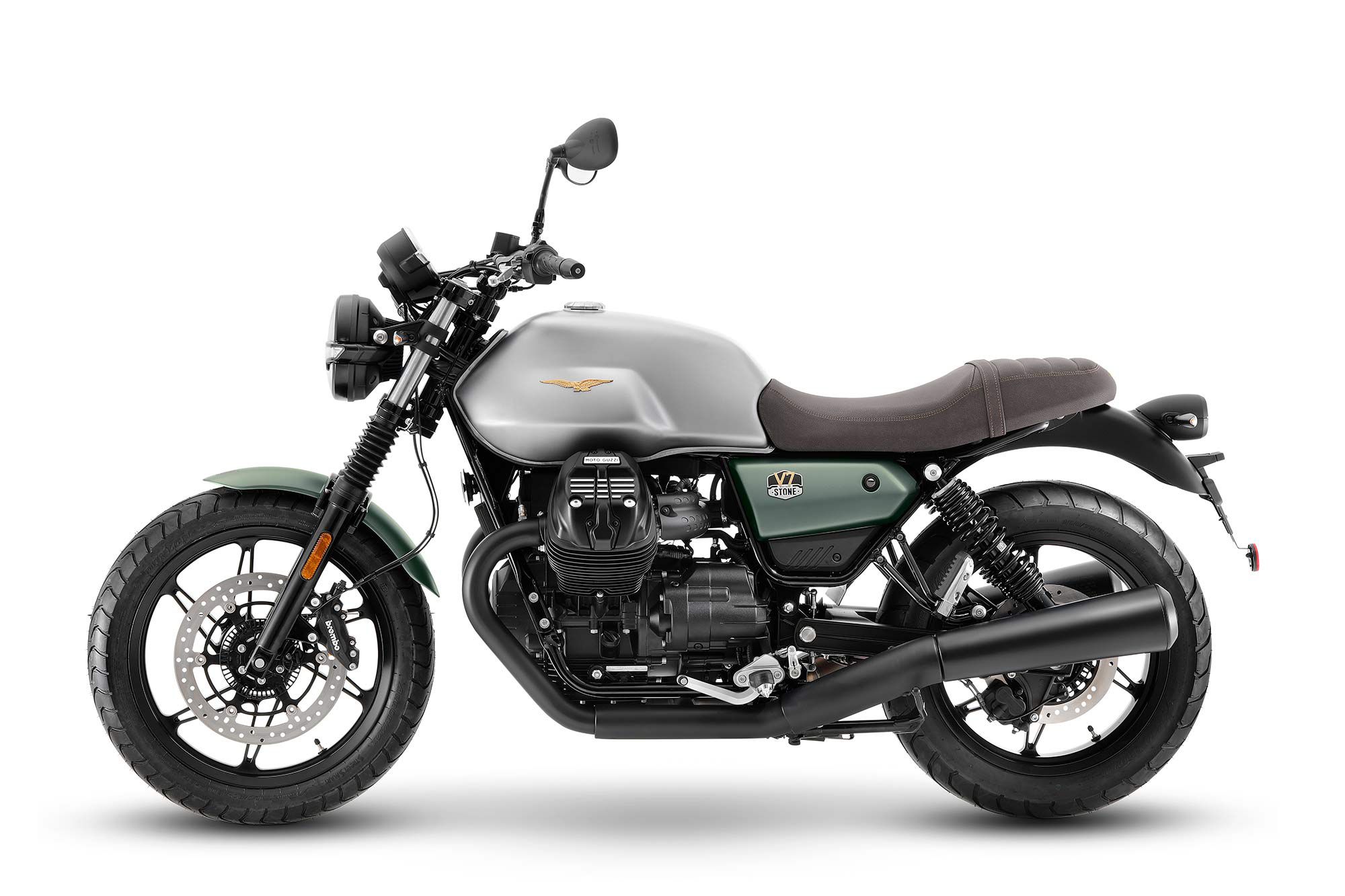 The New McLaren GT Ride-On: The Talk of the Playground

The New McLaren GT Ride-On: The Talk of the Playground

Now your child can be the one on the playground with a McLaren GT. For most car enthusiasts, the passion for anything automotive started at a young age with dream car posters and hot wheels. With new improvements in technology and design, the inlet to the car world starts with a vehicle of your own, […] The post The New McLaren GT Ride-On: The Talk of the Playground appeared first on duPont REGISTRY Daily.

Now your child can be the one on the playground with a McLaren GT. For most car enthusiasts, the passion for anything automotive started at a young age with dream car posters and hot wheels. With new improvements in technology and design, the inlet to the car world starts with a vehicle of your own, […]

The post The New McLaren GT Ride-On: The Talk of the Playground appeared first on duPont REGISTRY Daily.

Another Penthouse at One Thousand Museum has Sold for $11...

Bentley Plans to “Come Back Stronger” on May 11th