We recently took in a retrospective review of the TRF414.  The TRF414 increased the momentum that Tamiya had began with the TRF414X and it started to win races around the world, and even managed to come second at the prestigious millennium Reedy Race.  The next big step ahead was the TRF414M chassis. A revised chassis, lighter bulkheads and lighter TA04 drive train parts brought extra speed, and more success with victories in Germany, Hong Kong and Japan. This was Followed by the TRF414M2 chassis, again with some minor tweaks including the big shift to the now iconic Tamiya blue anodizing (Blue makes you faster.. FACT!).The culmination of the TRF414's development was the 2002 IFMAR touring car world championships in South Africa. Surikarn Chaidajsuriya & Masayuki Muira managed to get 2 cars in the A final. A good chance to claim Tamiya’s inaugural world championship win. It all got down to the third round, three drivers were able to win..  Watch the third A final race here.  After watching the 3rd A final of the 2002 IFMAR world championship, when Surikarn overtook both Barry Baker & Masami Hirosaka in the first few corners, I was blown away & Tamiya was taken seriously as a competitive teamSurikarn was world champion, and Tamiya was to begin the its record holding dominance of the world touring car championship.After the event, Tamiya released a world championship replica. This car includes all the parts that Surikarn used over a standard TRF414M to allow you to build a fitting replica of this great achievementThis kit was released as a limited edition of 1700 worldwide. The boxes are sealed, so you have no way of knowing what number is inside the box! The number was etched onto the motor plate with a commemorative logo to denote the 2002 win. I wanted one for myself, but it was out of my price range at the time. When I could finally afford one, none were availableAfter 18yrs, I was finally able to track one down. I opened the box & got to work on building the car. Although it’s a limited edition, I am not a fan of new in box kits. It’s a race car, it needed to be built & raced!Let's open the box and start the build :)Unlike the 414 and its very basic manual, this is a proper detailed manual and has been laid out in the style you have come to expect from Tamiya.Opening the box & inspected all the parts. The bags are sealed, but they aren’t labelled bags A-Z. The separate screws & alloy parts are in different bags. It wasn’t a problem as I opened the bags into a parts tray to commence the build. The screws are titanium as are the turnbuckles which is a nice touch, an attention to quality & reduction of weightThe lower deck appears to be 2mm thick with quite a wide front end. The chassis feels quite flexible but doesn’t have any cut outs apart from the slots for the 6 cells & motor to sit very low.Moving onto the suspension. The car now uses a lot to TA04 parts as opposed to unique 414 arms. The lower arms now sit in alloy pivot blocks. You would need to change the entire block to achieve different toe in angles. They have slots machined into the blocks, more on that laterThe pivot blocks sit quite high on spacers to raise the roll centres. The spacers you can use to adjust the wheelbase are quite thick, not the normal Tamiya blue 5mm diameter, these are silver and have a 7mm diameter. When building the rear, I found there was a little bit of play, I had to add another 0.7mm to remove the play.The rear diff has to be assembled before the rear bulkheads are installed. The diff has lightweight Delrin outdrives. The retaining rings need to be fitted after the diff is installed in the car. I used Schumacher diff lube for the balls & Team Associated black grease for the thrust bearingThe bulkheads are in Tamiya signature blue. Unlike the earlier models the WCR has parts of the bulkheads removed to make them a little lighter. Tamiya took that concept further with the separately available lightweight bulkheads. Like the the previous TRF414 models , the diff bearings are preinstalled in the bulkheads which are pressed in place. You fit the diff, motor plate & rear belt when you screw it all together.At this point you can now see what number I ended up with. 260/1700, quite a low number!The grooves in the pivot blocks line up with the rear bulkheads which locks everything in place to prevent tweak & misalignment.The front utilizes a one way diff which was the current trend at the time. When fitting it, it uses a regular 10 ball rear diff pulley, but only 4 screws to bolt it on. As you can see, the holes don’t line up exactly straight, but as long as you line it all up, it will not be an issueThe layshafts uses aluminium 15t pulleys. A centre one way pulley sits on the front pulley. The spur gear holder is held in with a grub screw like the rear pulley. You can move the position to adjust the free play.The front bulkheads line up the same as the rear. All locked in place by the pivot blocksThe drive shafts are 42mm & 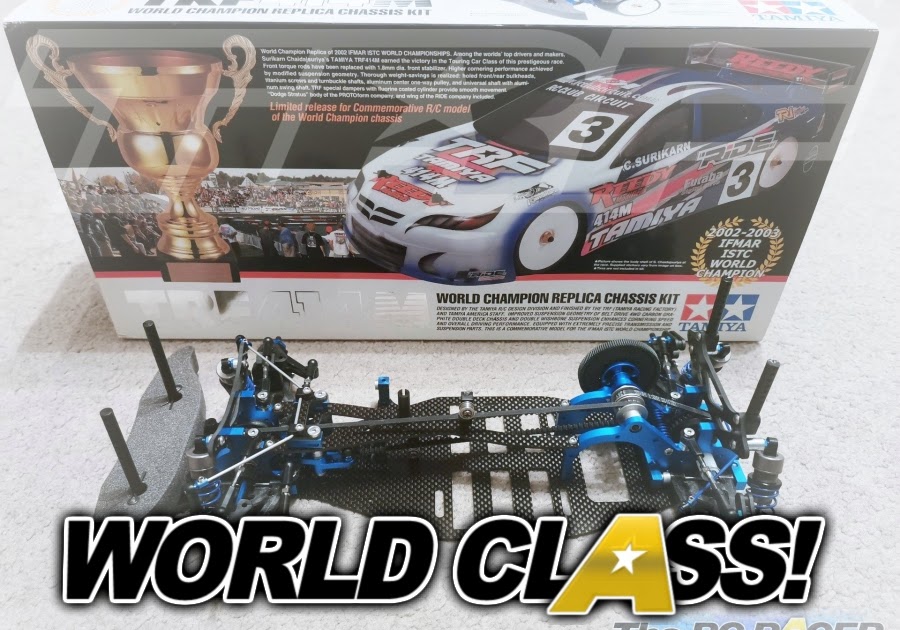 What’s next for the car?

As previously mentioned, this car will be used on the track. Although the purists say its too valuable to build/race, I feel it’s a shame to leave it sat in the box. I always wanted this car, so I am going to make the most of it!
I will be aiming to fit period correct motor/esc. I could fit a brushless system, but I feels this ruins the purpose of the car. Even a modern day 17.5t brushless has more torque than the 8x2 brushed motor this car used. I will fit a modern radio & servo as its easier to use the car but doesn’t affect performance. I will see if I can find some saddle pack lipos. Old school C cells may not be easily available
At the time of writing, I have found a Futaba ESC & Reedy Ti motor. Not exactly 100% accurate, but pretty close to the equipment used
The kit comes with the exact same shell & wing that Surikarn used. The shell is a Protoform Dodge Stratus. A very popular shell back in the day. The Ride rear wing is also included. This bodyshell highlights a massive improvement of bodyshell development over the years. Most modern shells have centre/offset positions for the front wheels and lines across the bonnet/boot to align the body posts accurately. A bit of guess work was required, but I have mounted the shell evenly.
I will be getting the shell painted in Surikarn’s colours as a fitting tribute
The wheels are Tamiya ones he used, but no tyres/inserts are included. As the championship used Team Orion control tyres, they may have been difficult to obtain after the event. I will see what I can do.
Stay tuned for Part 2 of this review where I will be include fitting the electrics, popping on the painted shall and will hit the track!
Source : The RC Racer More

All About Kent Cartridge with Vice President Jeff Barry