What’s just over the current frontier will soon be revealed.Continue reading on Starts With A Bang! »

What’s just over the current frontier will soon be revealed.

Sleep-friendlier lighting is on the way

Its rolling acrobatics allow this robot to move especially swiftly — much as a fictional new Disney character can. 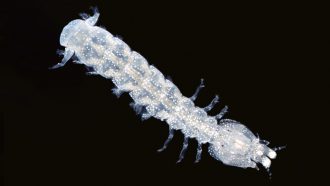 A tiny mantis shrimp found off the Pacific coast of South and Central America has inspired a new robot that somersaults and rolls as well as a circus acrobat — or Disney sidekick.

Wen-Bo Li is a mechanical engineer exploring how to design soft robots that move by rolling. He works at Shanghai Jiao Tong University in China. Not long ago, he came across a description from more than 40 years ago of how a mantis shrimp navigated beaches.

Roy Caldwell is an ecologist at the University of California, Berkeley. Back in 1979, he published a report in Nature about a mantis shrimp known as Nannosquilla decemspinosa. The tiny crustacean looks a bit like a cross between a caterpillar and a lobster. Caldwell watched as the animal walked underwater. But when waves pulled back, beaching the critter on wet sand, it no longer used its legs. “The animal continues in a series of backward somersaults, generally moving in a straight line until it encounters an obstacle or water suffiently deep for swimming, or until it becomes fatigued,” he wrote. He described this as a “unique form of locomotion.”

Intrigued, Li searched for more detailed information. “I found that it could move by a series of backward somersaults for as far as 2 meters [79 inches].” Along the way, it might do 20 to 40 consecutive, dynamic rolls, he learned. “It can even mount an incline.”

His team set to work. “After figuring out this fascinating mechanism,” Li says, “we started to design a soft robot to emulate the somersaulting.” They made the robot’s body in a series of segments, similar to those in a mantis shrimp. “We used 11 chambers. The shape is the same as the flat dorsal [backside] surface of the animal. That makes it stable.”

Before it moves, the robot — called SomBot — stretches out straight. Suction-cup action holds it to the floor. As the researchers push air through long thin tubes attached to one end, the suction releases. This causes the robot’s torso to bend into a circle and roll.

SomBot can roll pretty quickly — up to 9.2 body lengths per second. Li says that the suction combined with the somersault is the key to that speed. “With the help of the controllable anchoring, the curling body can be converted into fast movement,” he says.

The team described its design in the .

Daniela Rus is a robotics engineer at the Massachusetts Institute of Technology in Cambridge. She designed a soft-fish robot called SoFi. “Hard-bodied robots are made of materials such as hard plastics and metal,” she notes. Often large and heavy, these can be “dangerous to be around,” she explains. That’s why many robot designers prefer softer materials. These robots will end up “closer to real organisms in softness.”

Engineers often choose soft robots for missions where they need to protect soft organisms around them — such as people or other animals. Rus says that this new tech would not only be safer but also “more capable of a wide range of motions than hard-bodied robots.”

For its new robot, the Shanghai team used an elastomer. It’s a polymer — a material made from a long chain of repeating units. The same rubbery elastomer is sometimes used in shoe soles and car tires. After molded into a desired shape, it stays elastic. Rus describes this as being “compliant.” That flexibility, she says, should allow it to withstand force and to move as needed.

A need for speed

Li’s group had started with one big goal: make SomBot faster than earlier types of soft robots. Its somersaulting action appears to have helped them succeed. The team tested SomBot’s speed against a rigid-but-soft robot inspired by a cheetah’s spine. That soft-rolling robot looks like a caterpillar. It was designed to move much like human fingers. SomBot beat it by more than three body lengths per second.

But while SomBot’s speed is impressive, Li and his team have not yet gotten full control of its rolling action. They are beginning to consider giving it a closed-loop design. This may be something like a doughnut — or perhaps the mythical snake that bites its own tail.

SomBot’s suction also works best on smooth surfaces. However, most natural ones are fairly coarse. “Anchoring by suction won’t work on rough and uneven surfaces,” such as sidewalks, Li admits.

The new robot’s style of moving is something that Disney’s animators appreciate, too. In their new animated film, , the sidekick who transports the warrior princess also relies on rolling locomotion. One of the movie’s producers has described that sidekick — named Tuk Tuk — as part armadillo, part pillbug and part pug (a type of dog). Two of those can roll into a ball. In the movie, Tuk Tuk somersaults across the Asian landscape, speeding Raya from one site to another.

Why big nuts always rise to the top

Will this smartphone app become your exercise coach?