For ardent Wallabies supporters, the lack of a true blue-chip number six has lasted long enough to feel like a curse. Australian World Cup-winning teams always featured a good big man on the blindside flank, whether it was Vili Ofahengaue in 1991 or the combination of Matt Cockbain and Owen Finegan eight years later. The […] 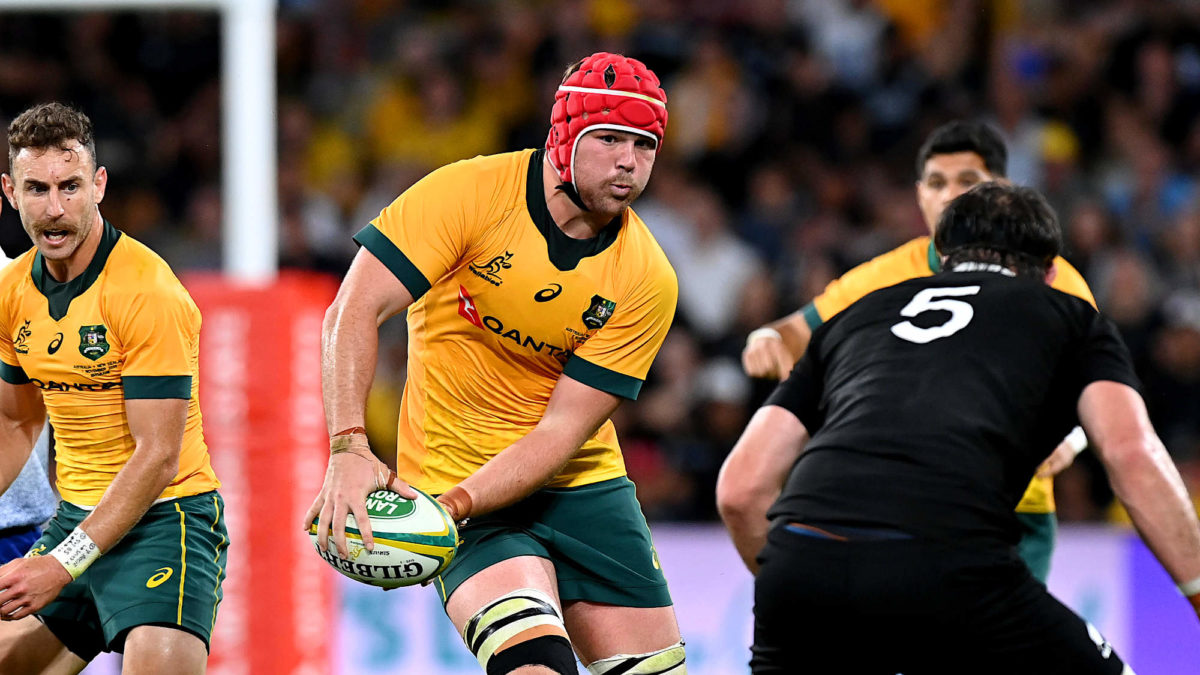 For ardent Wallabies supporters, the lack of a true blue-chip number six has lasted long enough to feel like a curse.

Australian World Cup-winning teams always featured a good big man on the blindside flank, whether it was Vili Ofahengaue in 1991 or the combination of Matt Cockbain and Owen Finegan eight years later.

The last quality number six was Scott Fardy, and his international career finished five years ago. When Fardy moved to Leinster, he left a gaping hole behind him.

That hole still exists. Dave Rennie has already run the rule over three different starters in his first five games as Wallaby head coach. Harry Wilson started there in Bledisloe 1, Lachie Swinton took over for Bledisloe 4, and Ned Hanigan filled the position in the remaining three matches against New Zealand and Argentina.

None of the solutions have proven fully satisfactory. Wilson was moved to number eight after the first game and Pete Samu has not been seen since. Swinton looked the part physically but got himself sent off after only 35 minutes, while Hanigan played most of his rugby in the second row for the Waratahs in Super Rugby AU.

All have the prototype size (6’4” and 110 kilos+) which Rennie is clearly seeking, but that is where their similarity as rugby players ends. Wilson is primarily a first-wave ball-carrier, Hanigan an aerial athlete at restarts and lineout, and Swinton a hitter in defence. There is some overlap of course, but those are their primary points of difference.

None of them possesses the key attributes that Fardy himself outlined to me in an interview at the beginning of the year.

“If you look at the role of the number six in the modern game, lineout ability and defence, especially short-side defence, are probably the key facets,” he said.

“When I was playing with David Pocock and Michael Hooper who were either on the ball or around it a huge amount of times, as a number six I was often doing the unseen work – covering space and working with the backs, to make sure everything was in order.

“Any coach who comes in needs to have a player matrix on each of the positions in the back row, and what he wants from them. The Brumbies were pretty strict in that respect, demanding a big third lineout target at number six and a big ball runner at number eight.”

As he added later in the interview, “You have to play a defence which can get the ball back for you as quickly as possible”.

Lineout ability, short-side defence, space coverage and communication with the backs, and creation of turnovers are all key features for a modern number six.

Let’s investigate these areas one by one, in relation to the players who have been selected to start at this problematic position by Rennie.

The stats reveal four lineouts were won by Australian starting blindside flankers over the five matches played thus far in 2020 – three by Swinton during his half-hour cameo in Bledisloe 4, one by Wilson. Ned Hanigan also won a couple, but they occurred when he was playing as Matt Philip’s partner in the second row in Bledisloe 4.

That represents nine per cent of the team’s total lineout output. To put that figure in perspective, Reds number six Liam Wright won 31.6 per cent of the Reds total own-ball lineouts in Super Rugby AU.

Hanigan was also responsible for the one lineout steal by a Wallaby number six, in the latest game against the Pumas:

Compare that to Wright, who took nine of the Reds’ 11 total steals in Super Rugby AU. That is five times the defensive lineout productivity.

Although the Wallaby starters have all posted tackle completion numbers around 90 per cent (more for Hanigan and Wilson, slightly less for Swinton) comparable to Wright, the weakness in short-side defence was a recurrent theme in the long series against the All Blacks.

Here is the first of the two most prominent examples from the first half of Bledisloe 3 in Sydney:

Michael Hooper is absorbed in the first tackle in midfield, so it is up to either Hanigan (number 6) or Wilson (in the red hat) to communicate with the nearest back (Nic White) and organize the short-side defence. Hanigan runs straight past the ruck to the openside and Wilson follows him, leaving White to realise the threat too late in the day: 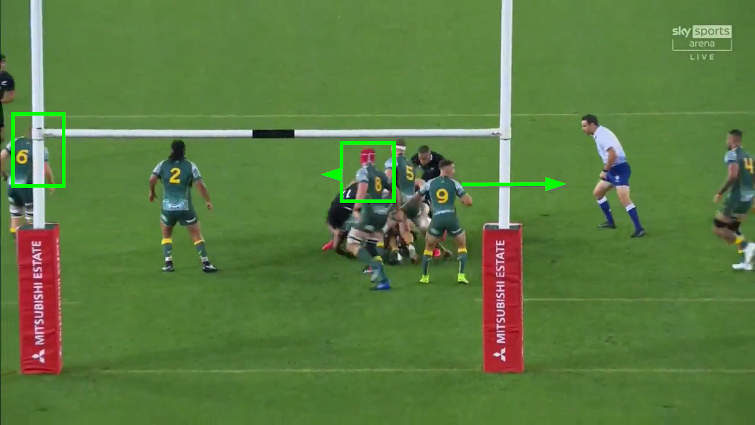 The second instance was a different version of the same issue:

Hanigan has his head buried in the middle of the maul, and Wilson is pulled towards the openside by an artful dodge by Aaron Smith. That leaves no back-row cover or communication on the short side of the maul, and Brandon Paenga-Amosa is left exposed one-on-one with Richie Mo’unga: 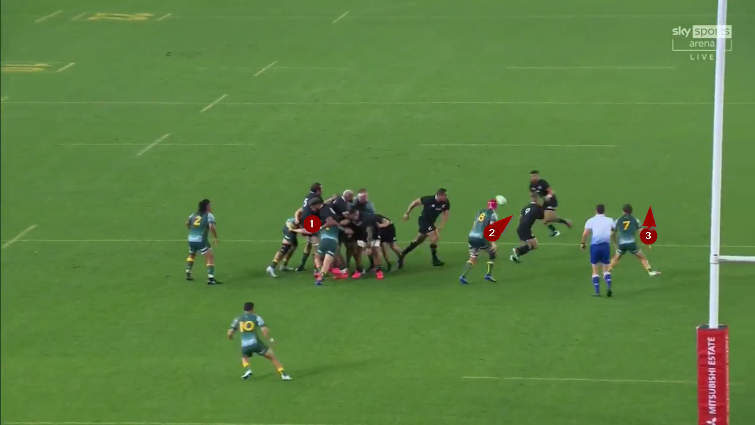 Would Lachie Swinton be a better bet at organising a short-side defence? I wrote an article back in February which touched on the topic. It should be emphasised that Jed Holloway started this game for the Waratahs at blindside flanker, with Swinton only coming on for the final half-hour, but it is still a question the Wallaby coaches would have to consider seriously.

At present, Lachie Swinton can provide the physical edge, and at least some of the lineout production, that Rennie wants from the position. Sometimes Swinton stays within the limits and delivers a decent rib-tickler:

But he also delivered the same goods late and high:

The last incident, the hit on Sam Whitelock, resulted in Swinton’s red card. He needs to prove he can keep thinking about his role as much as enacting it physically. He has to hit, but he also has to read the game on defence.

Liam Wright has shown he can defend a short-side efficiently, and he turned over ball at a rate of one turnover made to every ten tackles completed in Super Rugby AU, compared to approximately one to every 50 tackles for Wilson, Hanigan and Swinton collectively for the Wallabies. Here’s one example from a game I looked at earlier in the year:

Wallaby captain Michael Hooper urgently needs some help at the post-tackle, especially now that Filipo Daugunu has been replaced in the starting line-up by Tom Wright.

In the five games so far, the Wallabies have stolen ball cleanly only seven times on the deck – two apiece for Hooper, Brandon Paenga-Amosa and Daugunu, and one for Hanigan. The ball retention rate of their opponents exceeds that of the Wallabies’ by 2.5 per cent, a significant difference. Instead of losing the ball at one in every 30 rucks you create, you are losing it at one in every 16.

To reinforce Scott Fardy’s words: “You have to play a defence which can get the ball back for you as quickly as possible”.

At the 2015 World Cup, all three back-rowers (Hooper, Fardy and David Pocock) were genuine on-ball threats, and there were others outside them like Adam Ashley-Cooper. Now Australia are down to Hooper and the hooker.

Summary
Three players have started in five games already on the blindside flank for Dave Rennie’s Wallabies. Ever since Scott Fardy left for Irish shores, Australia have struggled to find a good big man to take his place. Fardy had the physicality and hardness of a true second-rower, but he played with the intelligence of an openside flanker. It is a rare combination.

All three of Lachie Swinton, Harry Wilson and Ned Hanigan in his second (and much-improved) Wallaby coming have the prototype physical build. But sooner or later, Wilson will cement himself at number 8 as the primary ball-carrier in Fardy’s back-row model, and neither Swinton nor Hanigan have yet shown they possess the ex-Brumby’s balance of muscularity and defensive awareness.

Hanigan looks happier in the second row, and Swinton loves to hit. Communication with the backs and organising a short-side defence are not yet on their menus.

Queensland Reds captain Liam Wright may not have the prototypical physique of the other three, but he has all of the concrete qualities required. He is potentially more productive in the lineout, he can defend and organise on the short-side of a set-piece or a kick-chase, and he can give Michael Hooper invaluable help on the ground after the tackle.

The number of the beast may begin with six, but the days of the unadulterated beast may be numbered. They are being counted off on the prison wall, by a man in maroon red.

‘There’s no mavericks out there, but Nigel Owens has his own style’: John Lacey...

The Tri Nations equations: What the Wallabies, Pumas and All Blacks need to do to...

“We want him to earn the right to play”: Dave Rennie speaks...

Why do certain Wallabies keep getting picked?

The Wallabies revert to dual pivots and claim a narrow...