7 questions for Nicola Sturgeon over the Alex Salmond affair

The Scottish first minister faces an uncomfortable five hours at Holyrood on Wednesday. 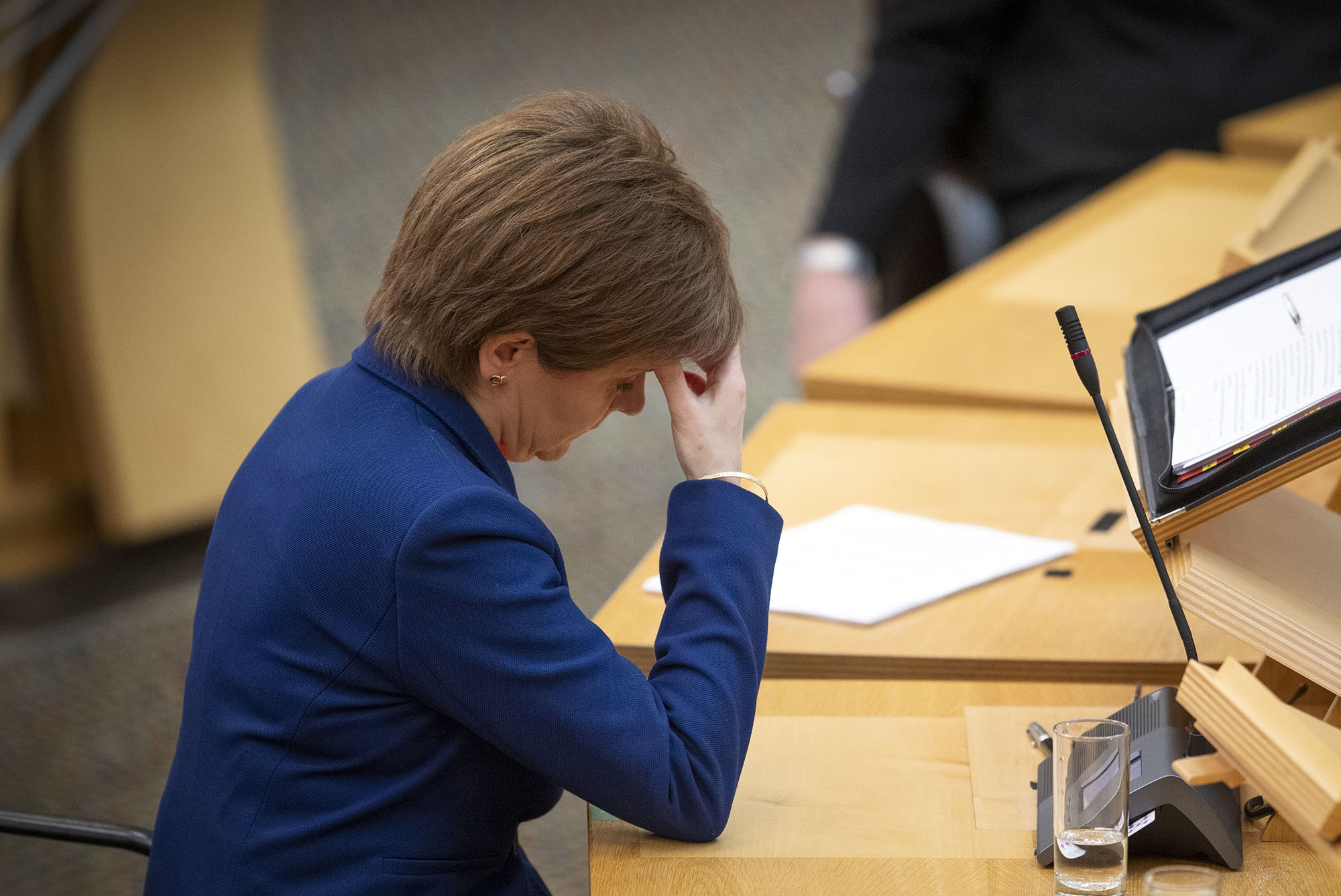 EDINBURGH — For Nicola Sturgeon, five hours in front of a Scottish parliament (Holyrood) committee on Wednesday could come to define not just her career but the future of Scotland itself.

The Scottish first minister has over the last year mostly — though not always — fended off questions about her very public feud with her predecessor and former mentor Alex Salmond with the assertion that she is focusing on the day job of battling coronavirus.

But on Wednesday morning, increasingly uncomfortable questions centered around the Scottish government’s handling of sexual harassment complaints against Salmond will become the day job.

Since Salmond was acquitted of 13 sexual assault charges in a trial last March, two inquiries have been looking at how Sturgeon’s government handled earlier complaints against her predecessor. Both Salmond and Sturgeon were lined up for explosive evidence sessions in front of a Holyrood committee.

Salmond went first. The former first minister spoke in gripping detail Friday, accusing figures close to Sturgeon of plotting against him and claiming his former protégé misled the Scottish Parliament.

Now, it’s Sturgeon’s turn. Before the session even begins she is facing calls to quit after documents released on the eve of her appearance raised questions about her version of events — and suggested her government continued a legal fight with Salmond despite advice it would lose.

Ahead of the first minister’s eagerly anticipated scrutiny session in Holyrood on Wednesday, POLITICO has the key questions she will have to address.

Was there a conspiracy to damage Salmond, and was she involved?

Alex Salmond’s most eye-catching claim is that several senior government and SNP officials very close to Sturgeon — including her own husband, party chief Peter Murrell — led a “malicious and concerted effort” to try and damage his reputation and even have him imprisoned. Sturgeon denies the existence of any conspiracy, but questions remain.

The former first minister told the committee he had been given a memory stick in the build-up to his criminal trial, containing messages from people close to Sturgeon that involved “pressuring police,” “collusion with witnesses” and “construction of evidence because police were felt to be inadequate in finding it themselves.” The messages were released to the committee Tuesday, but are yet to be published.

Some of the messages have already been leaked into the public domain though. One from Murrell in 2019 appeared to suggest it would be “good” to be “pressurising” police to investigate accusations against Salmond, while another leaked text from civil service chief Leslie Evans said that the “battle may be lost but not the war” — on the same day the Scottish government lost the judicial review to Salmond.

The first minister will face questions about how much she knew of the texts.

Why did her government proceed with a case against Salmond?

Deputy First Minister John Swinney admitted in a letter to the inquiry Tuesday that “reservations were raised” in legal advice to the government on whether to press ahead with its case in a judicial review brought by Salmond. It eventually lost the case and had to pay out over half a million pounds to the former first minister in legal fees.

Fresh documents released on Tuesday night show lawyers were “very concerned indeed” about the case months before the government conceded defeat, while advisers later expressed “dismay” at the progress of the case.

If Swinney and Sturgeon went against clear legal advice that could put them in a tough spot, with Scottish Tory leader Douglas Ross arguing that “continuing with the judicial review when it was doomed would clearly be a breach of the ministerial code.” Expect Sturgeon to be probed on that on Wednesday.

Did she deliberately mislead parliament?

This point is already firing up the opposition Scottish Conservatives, who on Tuesday night claimed there was “no longer any doubt that Nicola Sturgeon lied to the Scottish Parliament” and broke Scotland’s ministerial code “on numerous counts.”

Sturgeon initially told Holyrood she learned about allegations against Salmond at a meeting with him in her home on April 2, 2018.

It later emerged she had met Salmond’s former chief of staff Geoff Aberdein days earlier on March 29, where she was told of the allegations. She claims she forgot about this meeting and that it was “opportunistic.”

Salmond rejects the claim, telling the committee Friday that the meeting was pre-arranged with the purpose of informing her of the complaints. His evidence throws into question Sturgeon’s assertion to parliament that she believed beforehand the April meeting was to discuss SNP, rather than government, business.

Sturgeon said in her written submission to the committee that she had met Salmond on April 2 with the expectation that he was going to resign from the SNP, a claim he says has no basis in fact.

New evidence released Tuesday night appeared to back up Salmond’s claim about the purpose of the two meetings, prompting the Scottish Tories to say they will submit a vote of no confidence in Sturgeon.

The ministerial code states that ministers who “knowingly mislead parliament” are expected to offer their resignation. It also states that all government meetings should be recorded — the April 2 meeting was not.

Why was the government’s complaints policy rewritten to exclude her?

Initial drafts from November 2017 of a new government policy for dealing with staff issues said the first minister should be informed straight away of any accusations that involved former ministers.

The policy was in the process of being drafted on Sturgeon’s instruction around the same time two women made the first allegations to the government about Salmond and Sky News enquired about allegations of sexually inappropriate behaviour by him at Edinburgh Airport.

The Scottish government has insisted Sturgeon was unaware of the former, while the latter was denied and no story broadcast.

However, the Scottish Sun revealed that the drafted policy was changed in December to remove the first minister from the loop. The change was made following a meeting between Sturgeon and Evans.

Opposition figures have claimed the timeline suggests Sturgeon misled parliament around when she knew of allegations against Salmond, while allies of the former first minister say the harassment policy was redrawn to implicate him and insulate her.

Who in the Scottish government is leaking?

Salmond claimed in his evidence that the identity of a complainant was revealed to Aberdein by the Scottish government ahead of his meeting with Sturgeon. She has denied that this happened, but new evidence released Tuesday night from a former aide to Salmond supported that claim.

Separately, the former first minister has said there should be a “further police investigation” into a leak to the Daily Record newspaper that revealed the government and police were probing complaints against him.

He believes the leak came from inside the government and that “in all likelihood” it was made by one of the first minister’s special advisers — and that he is confident he knows which one.

Why has nobody been sacked?

“The real cost to the Scottish people runs into many millions of pounds and yet no-one in this entire process has uttered the simple words which are necessary on occasions to renew and refresh democratic institutions – ‘I Resign’,” Salmond wrote in the coda of his final written submission to the committee.

He went further Friday, naming Scotland’s Lord Advocate James Wolffe — Scotland’s top law officer — as someone who should be considering their position, along with civil service Permanent Secretary Leslie Evans.

Evans has come under particular pressure, having led the government’s botched investigation against Salmond in 2018 that the Scottish government admitted in court had been “tainted with apparent bias.”

Sturgeon has also faced multiple calls to sack her husband Peter Murrell as SNP chief executive, as he has been accused of misleading and obstructing the Holyrood committee.

If she is found to have broken the ministerial code, will she resign?

Though members of the committee will likely have an opinion on whether Sturgeon broke the ministerial code, the important ruling will come from a different inquiry that is currently underway.

James Hamilton, a former Irish director of public prosecutions, has been tasked with investigating whether she broke the code of conduct laid out for Scottish ministers. He is expected to rule on the issue before May’s crucial Holyrood elections.

However, though Hamilton will provide his judgement on whether Sturgeon breached the rules, he cannot impose a punishment. Sturgeon herself would have to decide to step down, and a vote of no confidence floated by the opposition is alone unlikely to topple her.

One variable that could work in her favor comes from the unlikely source of U.K. Home Secretary Priti Patel, who remains in office despite being found to have breached the Westminster’s own ministerial code last year.

Whether Sturgeon will be forced to step down remains the defining question of the entire scandal.

It could determine not just the future of the SNP but the fate of the independence cause itself. Sturgeon’s popularity has been a key factor behind increased and sustained support for Scottish independence.

The EU is undermining its democracies while funding its...

The revolt of the white-haired

What if Trump’s record on the pandemic is better than we...