Nope, it's not a lighthouse! It’s a single-family home designed to look a lighthouse, perched by the Ohio River. Can it guide in a vacation-minded buyer? The post $779K Lighthouse-Inspired Home on the Ohio River Waiting To Guide In a Buyer appeared first on Real Estate News & Insights | realtor.com®. 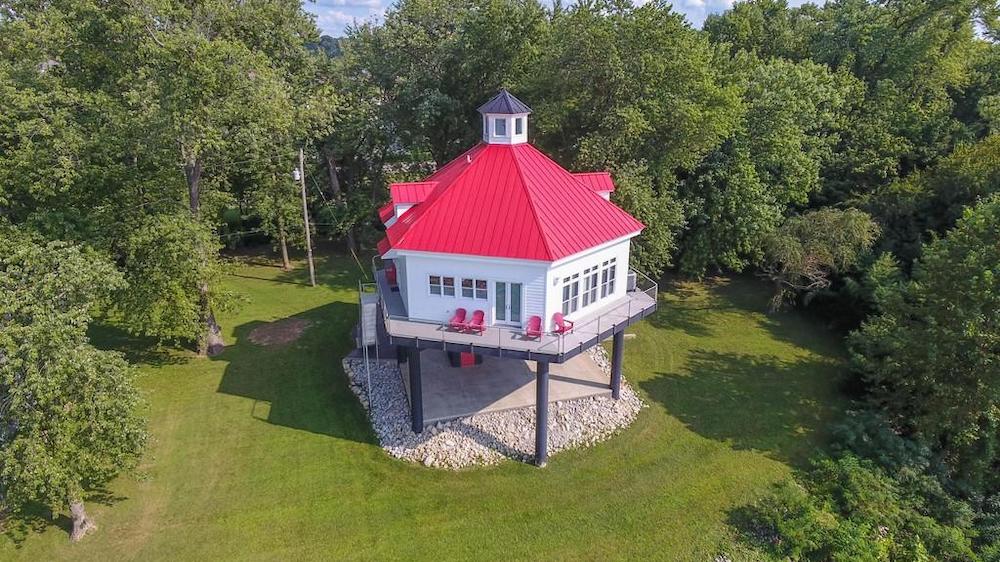 Nope, it’s not a lighthouse. It’s a single-family home designed to look like a lighthouse, perched along the Ohio River. The distinctive dwelling is in Prospect, KY, a charming town of 5,000 that rates as one of the state’s wealthiest communities.

The listing agent , with Lenihan Sotheby’s International Realty, says they were inspired by the Thomas Point Shoal Lighthouse in Annapolis, MD.

However, this residence juts out onto the Ohio River—not the Chesapeake Bay. A new owner can sip a mint julep while gazing out at 200 feet of private river frontage.

The current owners are the home’s second. They’re Indiana residents who snapped up the property in 2016, intent on weekend getaways. Over time, it became harder for them to spend time there.

Masterson thinks the place is likely to attract buyers in search of a vacation home—or possibly a couple or single person who work from home.

“It’s not set up for a family, because there’s not a lot of space. Maybe just a family of two,” she says.

Recent improvements by the current owners include replacing the deck’s former railing with cable, which no longer blocks the view.

They also swapped out the traditional interior in favor of “a more coastal vibe,” says Masterson.

Lime-green cabinetry in the kitchen and lime-green paint in the bunkroom area are just two examples. A spiral staircase with supple curves connects the two stories. There’s also a brick floor-to-ceiling fireplace in the living room. And about those views.

“You can see up and down the river from every room in the home,” says Masterson. “That was really important [for the builders], to maximize the views.”

An elevator expands the home’s accessibility, and an open floor plan further capitalizes on the river view.

On the main floor, you’ll find the living room, kitchen, and master bedroom. The top floor has an additional bath (check out the mirror in the shape of sunglasses!) with a farmhouse-style sink, plus two queen built-in beds.

“It’s really one of the most unique properties for the area,” says Masterson, praising the thoughtful design that maximizes its 2,200 square feet.

There’s also no need to travel into Louisville for dinner. This home is adjacent to Captain’s Quarters, the area’s largest riverfront restaurant.

Also a short walk away: Captain’s Quarters Yacht Club, where many locals store a boat. Just don’t expect this home to shine the way back for you!

The post $779K Lighthouse-Inspired Home on the Ohio River Waiting To Guide In a Buyer appeared first on Real Estate News & Insights | realtor.com®.

EXCLUSIVE: NRLA to back landlords over ‘unnecessary and...

10 Tips on How to Prepare Your House for a Hurricane

Why are more DIY landlords looking to use agents on full...

In Love With Laurel? HGTV’s ‘Home Town’ Has Huge Impact...