One of the best things about buying and selling luxury watches is that we get to become part of the story behind each timepiece that passes through our hands. While some of the watches we purchase are essentially unworn models whose owners decided they wanted something different, others are vintage pieces that have been part […] The post A 1949 Rolex Datejust ‘Ovettone’ from a Friend of the Wright Brothers  appeared first on Bob's Watches. 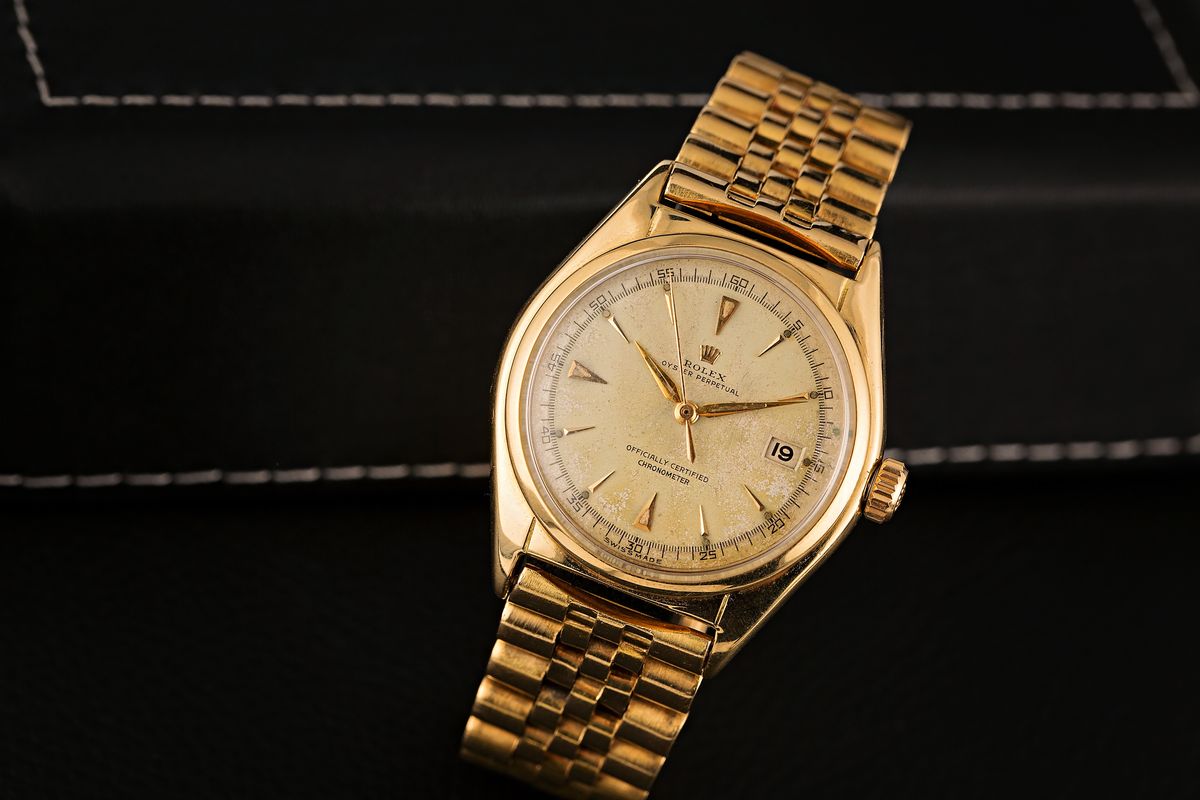 One of the best things about buying and selling luxury watches is that we get to become part of the story behind each timepiece that passes through our hands. While some of the watches we purchase are essentially unworn models whose owners decided they wanted something different, others are vintage pieces that have been part of a family’s history for multiple generations.

Recently, we purchased a Rolex Datejust reference 5030 directly from the grandson of the original owner. In truth, to call the watch a “Datejust” is slightly misleading, as the watch dates back to 1949, and is actually what could be considered a ‘Pre-Datejust’ since it has a date complication, yet its dial lacks the ‘Datejust’ name that now defines watches from this collection.

Technically speaking, this watch is a Rolex Oyster Perpetual ref. 5030, which is also sometimes referred to as an ‘Ovettone’ among collectors. However, even more impressive than this watch’s age or all-original condition is the great story behind it, and we’re grateful that the family of the original owner was kind enough to let us share it with everyone.

Click here to learn more about the complete history of the Rolex Datejust.

The Rolex Datejust was first launched in 1945 to celebrate Rolex’s 40th anniversary, and it forever set the standard for how a date display on a wristwatch should function. However, just like with the Rolex Daytona chronograph when it was first launched in the 1960s, there were a number of years following the initial debut of the Datejust where there were models that did not include the now-standard ‘Datejust’ name on their dials.

In fact, none of the very first Rolex Datejust watches from the inaugural reference 4467 actually have the Datejust name anywhere on them, despite being Datejust watches. Even on Rolex’s own website, the image of the first Datejust does not carry the Datejust name, and it was not until part of the way through production of the reference 5030 that the world, “Datejust” started to appear on the dials of Rolex’s date-displaying watches.

It should be noted that many purists maintain that these models should not actually be considered Rolex Datejust watches, but rather date-displaying Oyster Perpetual models. However, since Rolex considers them the official start of the Datejust collection, calling these watches the very earliest examples of the Rolex Datejust would not be inaccurate. With that in mind, these watches also go by another name. 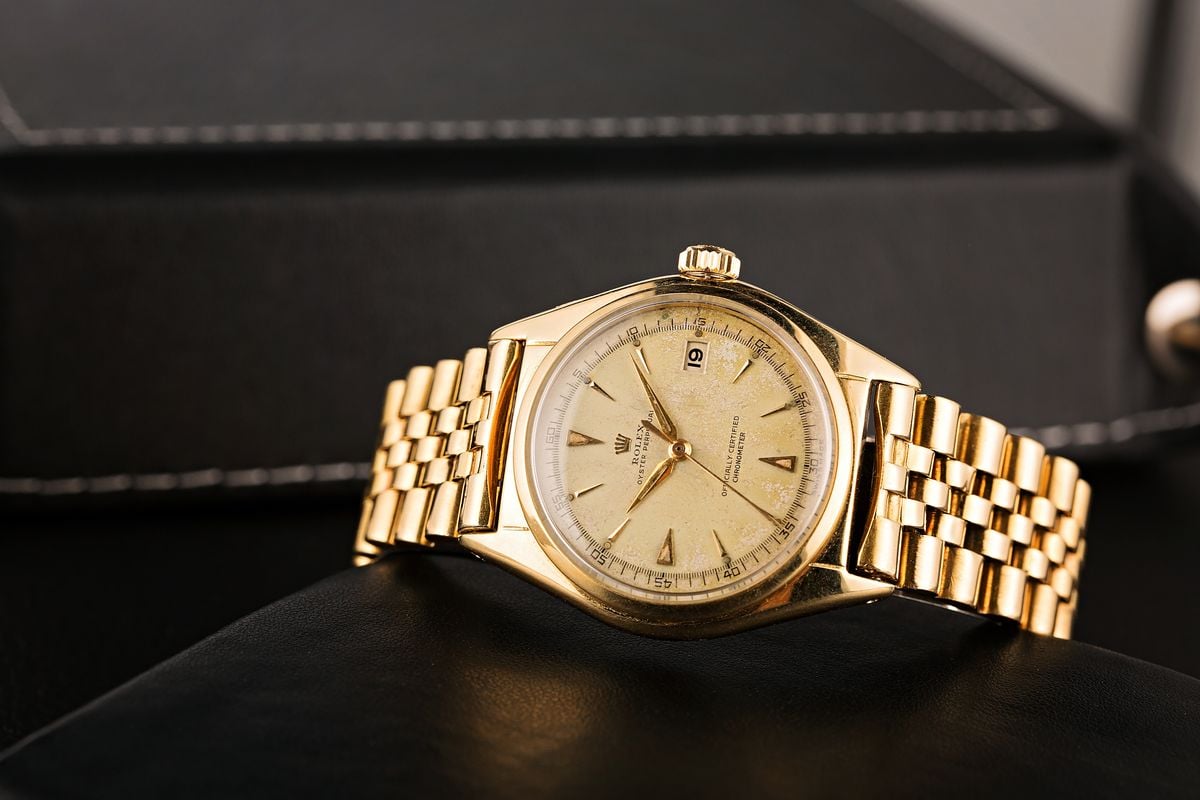 Often referred to as Rolex “Ovettone” watches, these models are characterized by their protruding domed casebacks and larger-than-average case diameters. The “ovettone” term is actually a nickname (Italian for “big egg”), and it describes a relatively broad category of oversized Rolex watches with protruding, bubble-shaped casebacks that were produced during the 1940s and ’50s.

Just like with the various “Bubble Back” watches that were powered by early Rolex self-winding movements, the automatic assembly on Rolex Ovettone watches added significant thickness to the movement and required a domed caseback. This feature, combined with the watches’ relatively large (for the time) case diameters, is what ultimately resulted in their “big egg” nickname among collectors.

Just like how these early Rolex Ovettone Datejust watches pre-date the ‘Datejust’ name, they also pre-date the arrival of the collection’s now-standard cyclops magnification lens. The cyclops magnifier wasn’t patented by Rolex until 1953, and it wasn’t introduced to the Datejust collection in 1955, meaning that all of the earliest Datejust watches were fitted with standard, domed acrylic crystals. With that in mind, the calendar disc itself is the real party-piece of the date display and is what is known as a “roulette” date wheel, where the numbers for the date alternate between red and black. 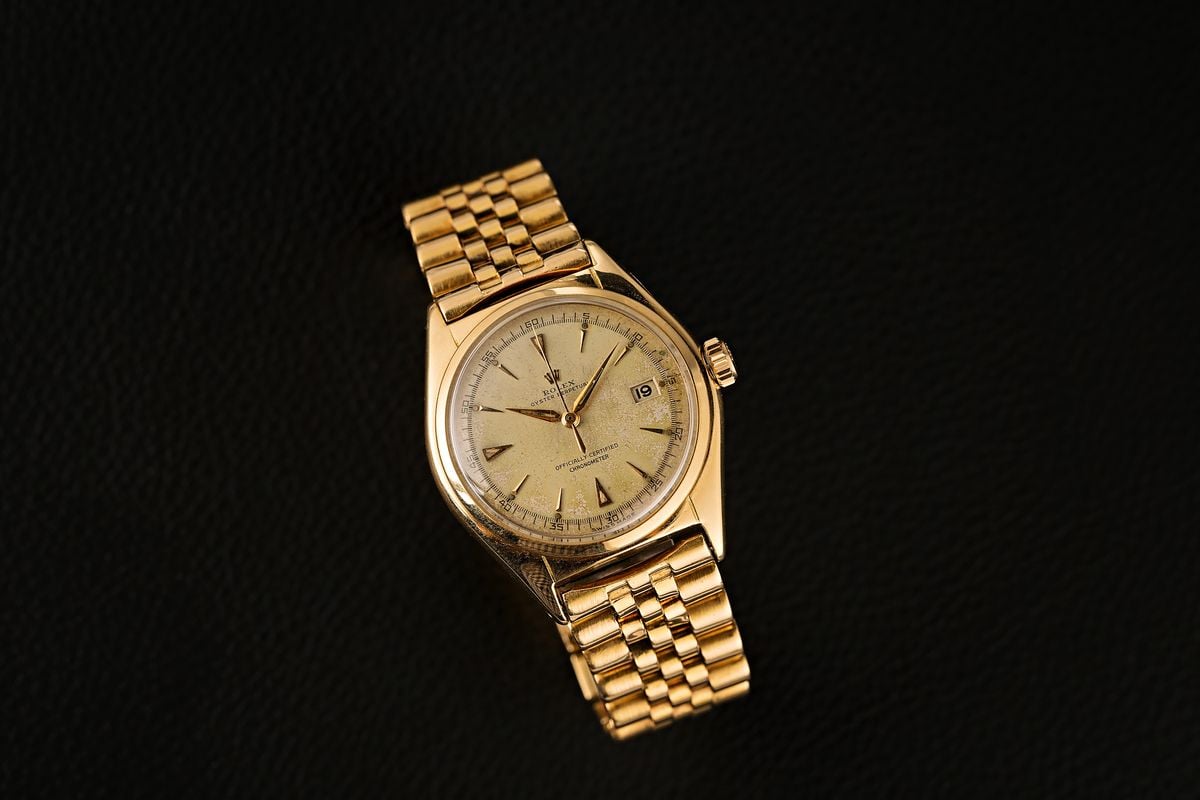 The Inventor, the Banker, and a gold Rolex watch

Completed by a white dial with pointed hour markers and leaf-shaped hands, this particular Rolex Datejust ‘Ovettone’ features a dial that is incredibly similar to the very first dial that Rolex ever featured on its pre-Datejust watches. While the watch itself is incredibly interesting and a fantastic example of one of Rolex’s very earliest date-displaying watches, we feel that it is the story behind this watch that makes it truly special.

The watch was originally purchased from a retailer in Dayton, Ohio in 1949 by Charles F. Kettering. An American inventor, engineer, and businessman, Kettering was the founder of Delco Electronics Corporation, the head of research at General Motors from 1920 to 1947, and the holder of 186 different patents.

Charles F. Kettering resided in Dayton, OH, and was a high-profile and powerful figure in the community there. Credited with key roles in developments such as leaded gasoline, the automotive electrical starting motor, leaded Freon refrigerant (in association with the DuPont Chemical Company), and the world’s first aerial missile (among many others), Charles F. Kettering was even featured on the cover of Time Magazine on January 9, 1933. 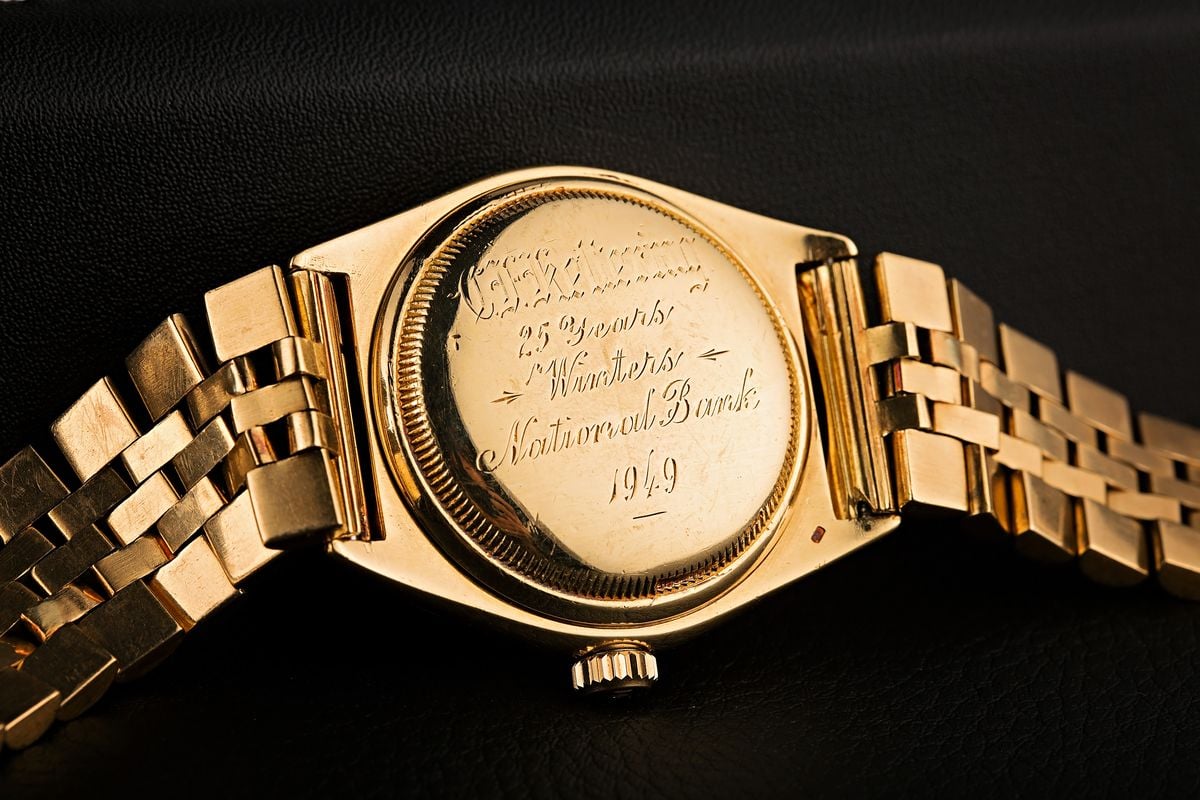 A long-time friend of Kettering and fellow Dayton resident, Walter H. J. Behm was a prominent banker in the Dayton, OH area. He began his career at Winters National Bank and Trust Company, which was considered THE bank in the region at the time. Interestingly, American comedian, actor, author, and television host, Jonathon Winters is a member of the same family that established the bank. Walter H. J. Behm climbed through the ranks to become the CEO of Winters Bank during the 1950’s.

Charles Kettering gave the watch to Walter Behm in 1949, and Behm continued to wear the watch right up until the day that he passed away. The definition of a hardworking and loyal employee, Walter H. J. Behm was still working for Winters National Bank up until his passing around 1960.

Friends with the Wright Brothers

Another Interesting bit about the story is that both Charles F. Kettering and Walter H. J. Behm were friends with the Wright brothers – yes, those same Wright brothers, the ones that are credited with inventing, building, and flying the world’s first motor-operated airplane. The men all lived in Dayton together, and Kettering and Behm were friends with Orville and Wilbur Wright back in the days when the brothers operated their Ohio-based bicycle shop. 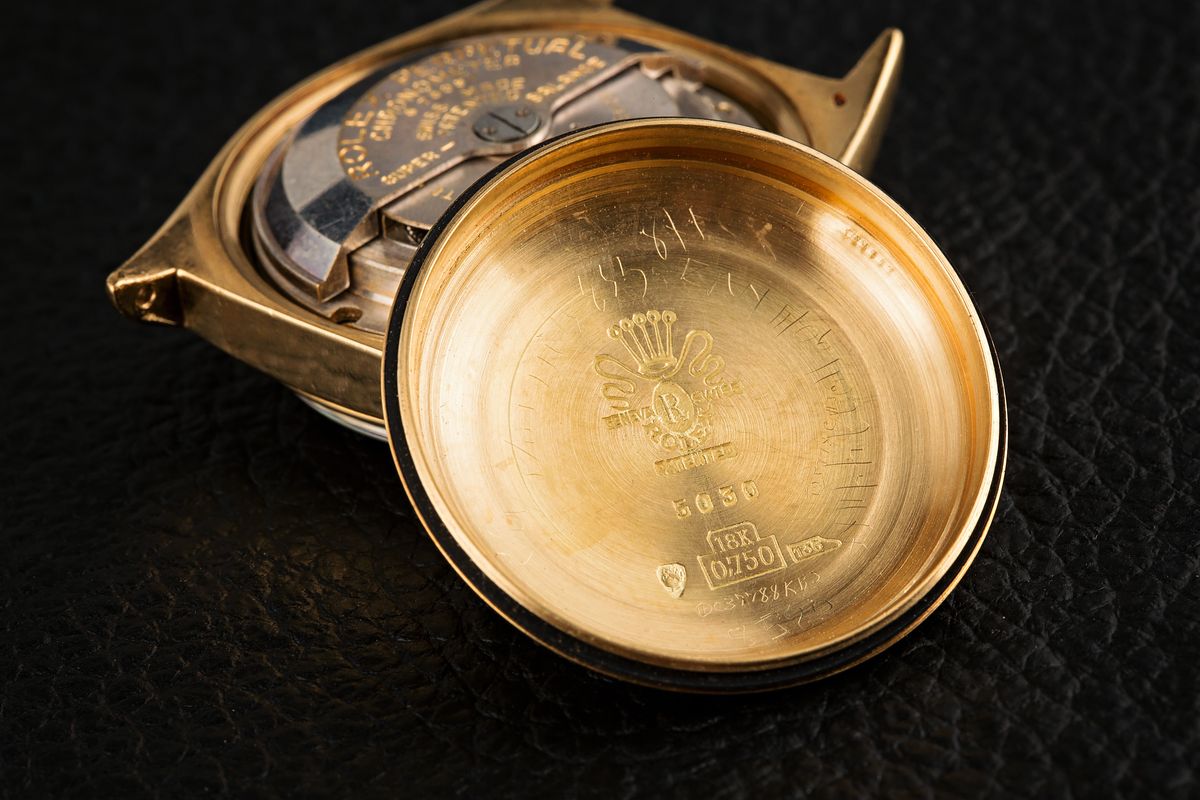 More than Just a Watch

On its own, this Rolex Datejust ‘Ovettone’ ref. 5030 is a beautiful and an incredibly interesting example of one of the earliest Rolex date-displaying watches. Pre-dating the “Datejust” name and even pre-dating the point in history before the Rolex Datejust first started to take on what would become its contemporary form, the reference 5030 is an exceptional watch, and one that is truly representative of a pivotal time in Rolex’s history.

With that in mind, the story behind this watch is what makes it more than just a beautiful and historically significant object. This Rolex watch connects two prominent men from the history of Dayton, Ohio and serves as a snapshot into their lives during the late 1940s. While the man who initially purchased this watch and his friend to whom he gifted it have both long since passed away, their story lives on in this vintage Rolex 5030.

Although he was only a few years old at the time that his grandfather passed away, Walter H. J. Behm’s grandson, John likes to imagine these members of the ‘Dayton elite’ meeting up after work in a mahogany-lined bar, smoking cigars, sipping Scotch, and strategizing their next business moves. Or, maybe they were smoking cigarettes, drinking beer, and telling jokes after a tough day in the office – this Rolex ‘Ovettone’ Datejust 5030 is the only thing left that was there to witness it. 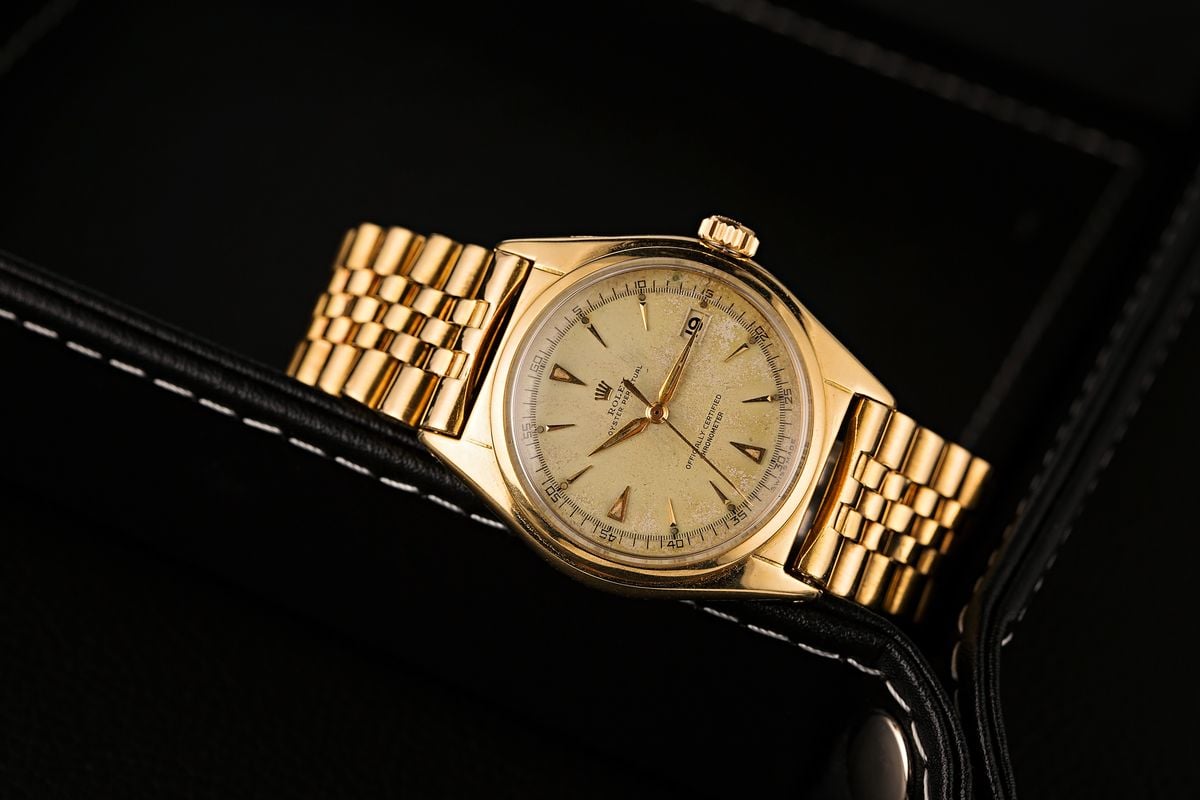 The post A 1949 Rolex Datejust ‘Ovettone’ from a Friend of the Wright Brothers  appeared first on Bob's Watches.

Singapore Airlines To Reassess Its Fleet Plan Over 6 Months

Global markets sink as investors brace for a GDP report that could be downright...

Guns.com’s Short Guide on What to Hunt in Texas

Is This The Ultimate Home-Defense Shotgun?