As its name implies, Jerry Seinfeld’s show “Comedians in Cars Getting Coffee” on Netflix is a feast for car and comic nerds. However, it’s also turned out to be equally exciting for horology enthusiasts as we’ve seen a fair share of top-tier luxury watches show up on the wrists of his guests. Who can forget […] The post A Closer Look at Jerry Seinfeld’s Watch Collection appeared first on Bob's Watches. 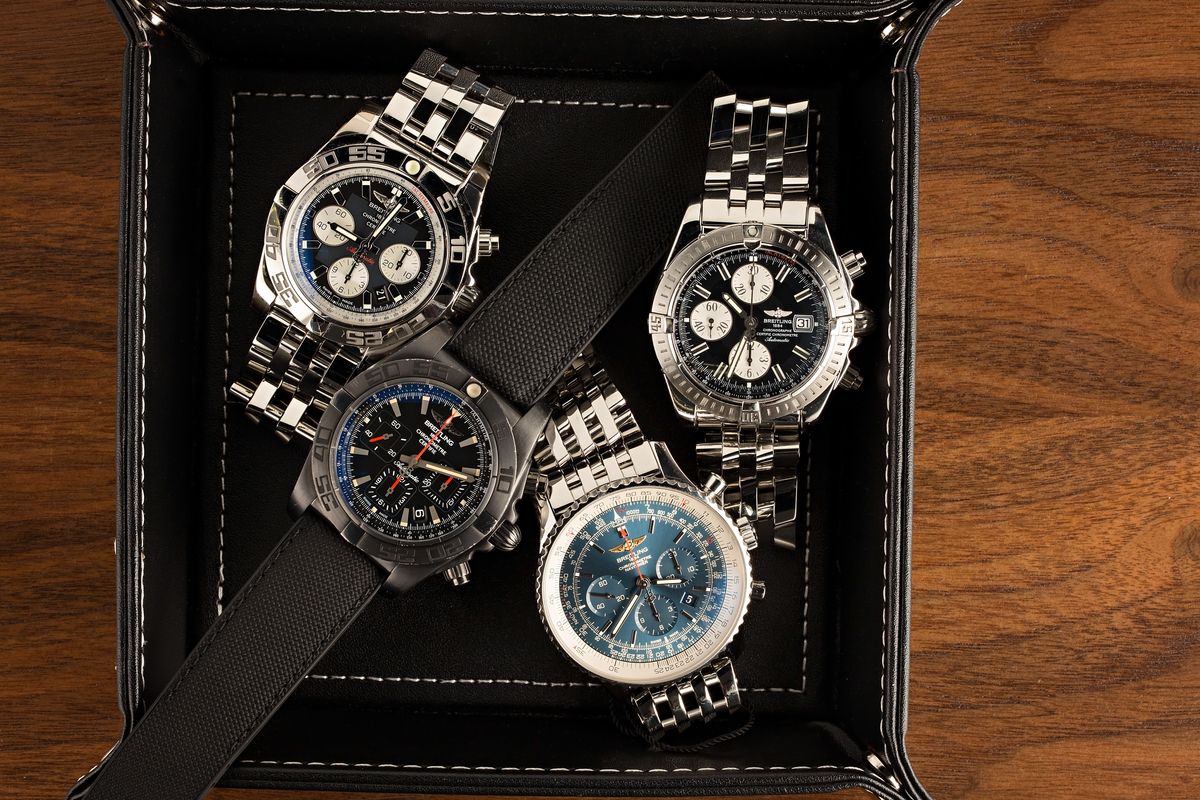 As its name implies, Jerry Seinfeld’s show “Comedians in Cars Getting Coffee” on Netflix is a feast for car and comic nerds. However, it’s also turned out to be equally exciting for horology enthusiasts as we’ve seen a fair share of top-tier luxury watches show up on the wrists of his guests. Who can forget Ellen’s vintage Rolex Daytona (with Paul Newman dial) or Kevin Hart’s Rolex Sky-Dweller in solid 18k white gold?

Aside from comedy and his massively successful eponymous sitcom, Jerry Seinfeld is also famous for his love of cars, with an enormous collection that he partly houses in his Manhattan-based garage. Just as he favors Porsche above any other car brand, Jerry Seinfeld favors Breitling watches over other watchmakers. However, this isn’t to say that Jerry Seinfeld doesn’t wear other watch brands – he does. Let’s zoom in on Jerry Seinfeld’s watch collection to see what the comedic genius likes to wear both on and off-screen.

From manual-winding pieces like the Cosmonaute to automatic editions like the Chronomat to digital quartz versions like the Aerospace, it’s clear that Jerry Seinfeld is a die-hard Breitling man.

– Founded by Léon Breitling when he was just 24 years old

– Invented the first chronograph wristwatch in 1915

Click here for a closer look at some of the most popular Breitling watches.

No doubt, Jerry Seinfeld is a fan of the Navitimer as we’ve seen him wear several models of Breitling’s classic pilot’s chronograph over the decades. One example is a 1990’s Navitimer, characterized by the registers placed at 6, 9, and 12 to indicate the Valjoux 7750 movement inside the case. From his days on “Seinfeld” (the watch not only appears on plenty of episodes but also on promotional images) to more recent appearances on “Comedians in Cars Getting Coffee,” this steel and black leather Breitling Navitimer is apparently a favorite of Jerry Seinfeld.

Another Navitimer we saw Jerry Seinfeld wearing during the days of the hit NBC sitcom was a Breitling Navitimer Airborne model with four subdials on the dial rather than the customary three-register layout.

Jerry Seinfeld also wears a newer version of the Navitimer in the form of the Breitling Cosmonaute Black Steel, which was first released in 2013 and limited to only 1,000 examples. The watch sports a 42mm steel case with a black carbon-based coating and runs on the in-house manually-wound B01 movement.

One particular Breitling that Jerry Seinfeld wore frequently on “Seinfeld” was a 1990’s Chronomat in stainless steel with a reverse panda dial. A reverse panda dial is one with a black dial and white registers and yet again, because of the 6, 9, and 12 placement of the registers, we know that the watch is powered by the Valjoux 7750 chronograph movement. An especially striking design detail of this specific watch from Jerry Seinfeld’s collection is the “Rouleaux bracelet,” also known as the “bullet bracelet,” which Breitling has in fact re-introduced in its newest 2020 Chronomat collection.

In 1999, Antiquorum hosted the “Famous Faces, Watch Auction For Charity” in New York City and Jerry Seinfeld was one of many celebrities that donated a watch for the cause. His pick was a yellow gold Breitling Chronomat Automatic ref. 13050.1. While it’s not clear if he ever owned the watch, it is telling that his pick was a Breitling. The donation was reported to have sold for $11,000.

Another Breitling Chronomat that Seinfeld wears is the stainless steel Chronomat 44 B01 with a “blackeye blue” dial, characterized by black sub-dials on a striking blue dial. The watch runs on Breitling’s in-house B01 movement and this particular version is an earlier generation (circa 2010s) of the Chronomat since it has the oversized and stylized Arabic numerals on the bezel.

A watch we’ve seen Jerry Seinfeld wear recently, including on his latest Netflix stand-up special, “23 Hours to Kill” is the Aerospace EVO Titanium 42mm watch with a white dial. Breitling’s famed analog/digital watch runs on a chronometer-certified SuperQuartz caliber and boasts a multitude of functions such as chronograph, countdown timer, second timezone, alarm, audible time signal, and calendar – all activated via the crown.

A massive watch by most standards, the Breitling Chrono-Matic 49 is another watch we’ve seen often on Jerry Seinfeld’s wrist. The Chrono-Matic was Breitling’s first line of automatic chronographs, which debuted in the late-1960s and featured a winding crown on the left-hand side of the case while the chronograph pushers were placed on the right. Conversely, the Breitling Chrono-Matic 49 that Jerry Seinfeld wears is a contemporary version with a massive 49mm steel case with a rubber tire-inspired piece shrouding the rotating bezel. Naturally, the car fanatic chose to pair his Chrono-Matic 49 with a rally-style rubber strap. 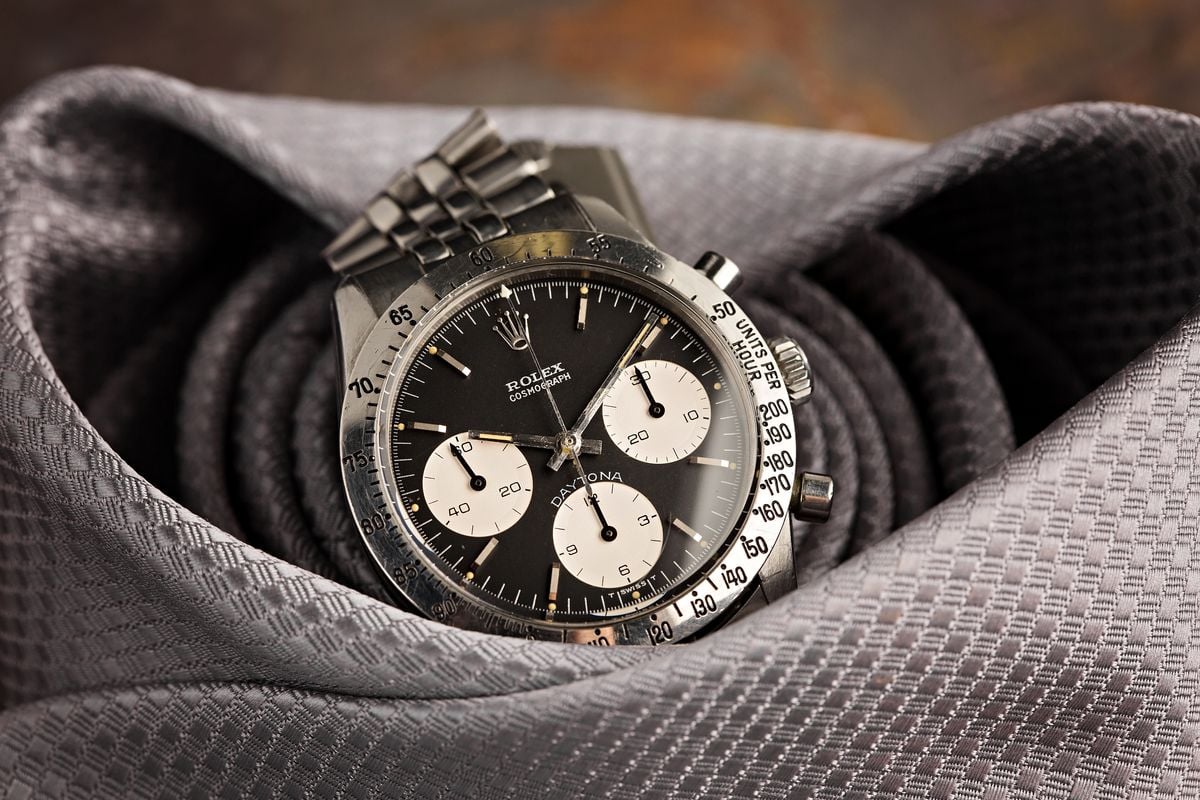 On a recent episode of “Comedians in Cars Getting Coffee,” Jerry Seinfeld is spotted wearing a vintage 1968 Rolex Daytona ref. 6239 – which turns out to be one with special racing provenance. In 1968, Vic Elford won the 24 Hours of Daytona race behind the wheel of a Porsche 907 longtail. This was the first overall win for a Porsche in a 24-hour race so it’s an important car in the automaker’s racing history. Included in Vic Elford’s prize package was a stainless steel Rolex Daytona 6239 with a black dial.

As former Seinfeld writer, Spike Feresten, tells it on his popular show, “Spike’s Car Radio,” when Jerry Seinfeld purchased the victorious Porsche 907 longtail he was also offered the chance to buy Vic Elford’s Daytona chronograph for an extra $15,000 – $20,000. Jerry Seinfeld turned down the offer. Even after it was re-offered to him about a year later for $50,000, Jerry Seinfeld declined again. After years of persuasion from Spike Feresten, Jerry Seinfeld finally purchased the watch only to find out that it had been serviced with replacement parts somewhere along the way. Hodinkee founder, Ben Clymer helped Jerry Seinfeld restore the vitnage Daytona with era-appropriate components like an acrylic crystal and a tritium-coated handset.

From the Daytona “Vic Elford” to now the Daytona “Jerry Seinfeld,” this is a Rolex chronograph with a great story that both car and watch enthusiasts can appreciate. If it ever does go up for auction, it would most likely become a six-figure watch. 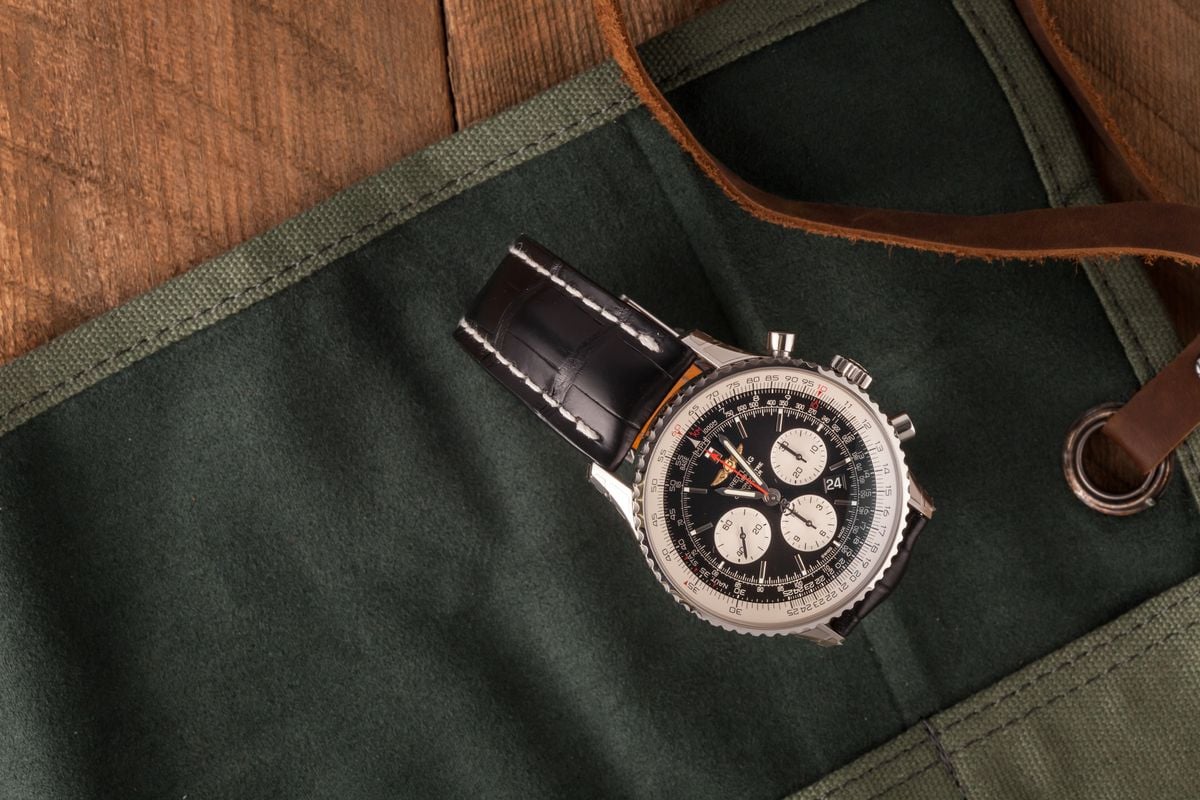 Jerry Seinfeld’s bank account may be one of the biggest in the entertainment industry, but he still appreciates a well-priced watch as illustrated by wearing a Casio G-Shock Rangeman during the Zach Galifianakis episode of “Comedians in Cars Getting Coffee.” A particularly tough timepiece from a brand that is known for making tough timepieces, the Master of G Rangeman GPRB1000-1 is not only shockproof but also mud-proof, dustproof, and water-resistant to 200 meters. The Rangeman also boasts a Triple Sensor mechanism for altimeter/barometer, digital compass, and thermometer indications.

Given his passion for cars, it is not surprising that Jerry Seinfeld opts for watches with motorsports heritage. Case in point is Jerry Seinfeld’s vintage Heuer “Siffert” Autavia. Nicknamed after Jo Siffert, the Swiss racecar driver who wore the watch during the 1970s, the Heuer Autavia Ref. 1163T chronograph stands out for its crisp white dial, black registers, and blue seconds hand. The vintage Heuer was clearly visible during a 2007 HP commercial starring his hands. The watch also appeared on the promo for “Comedians in Cars Getting Coffee” back in 2012. Jerry Seinfeld confirmed that it was indeed a Heuer “Siffert” Autavia via Twitter after someone asked him, and added he “bought it from an Italian gentleman.”

In some of the earliest episodes of “Seinfeld,” Jerry Seinfeld is seen wearing a steel Cartier Santos watch. While this timepiece is certainly not as sporty as his other Breitling, Rolex, and Heuer chronographs, it is worth remembering that the Santos was the world’s first pilot’s watch. Plus, during the 1980s, the Cartier Santos was one of the most sought-after luxury watches on the market.

A Jerry Seinfeld watch that rarely gets talked about is his Breguet Marine, which you can see on the Alec Baldwin episode of “Comedians in Cars Getting Coffee” from 2012. Although Breguet is renowned for its catalog of classic timepieces and high complication watches, it does have some sportier models like the Marine – inspired by Breguet marine chronometers supplied to the French Royal Navy during the time of King Louis XVIII. Judging from what we can see on the screen during the show, Jerry Seinfeld’s Breguet Marine looks to be the ref. 5817 in stainless steel, with a silver dial, and black rubber strap. The prominent lugs, double bezel, blue hands, and Roman numeral hour markers are unmistakably Breguet.

Though Jerry Seinfeld has been loyal to Breitling for decades, it’s great to see other names like Rolex, Heuer, Casio, Cartier, and Breguet as part of his watch collection too. Stylistically, it’s apparent that he prefers sportier silhouettes and almost always goes for a chronograph. Furthermore, he seems to only wear white metal watches, which isn’t surprising given his laid-back style.

While Breitling is famous for its aviation-inspired timepieces, you can still see Jerry Seinfeld’s obsession with cars spillover with some of his watch choices like the Heuer “Siffert” and Vic Elford’s Rolex Daytona. Given his love of cars, it is a little surprising that we haven’t seen Jerry Seinfeld wearing a Breitling x Bentley watch yet. Perhaps he may be tempted by the new limited-edition Breitling Premier B01 Chronograph 42 Bentley Mulliner- design-wise, it suits him perfectly. We’ll have to keep an eye on his wrist to see if a new watch shows up soon. 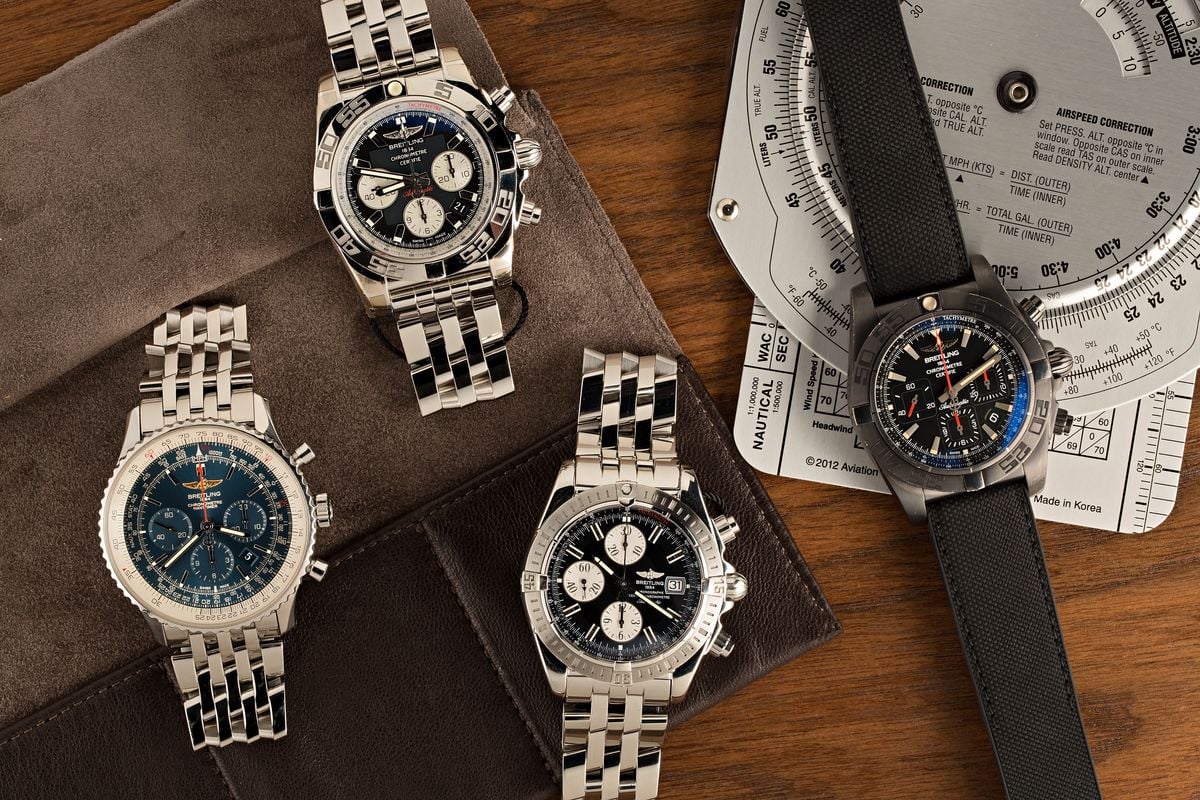 Three of the Best Vintage Omega Watches for Men