A contrast between shadows and light can now generate electricity

A new device exploits the contrast between bright spots and shade to produce a current that can power small electronics. 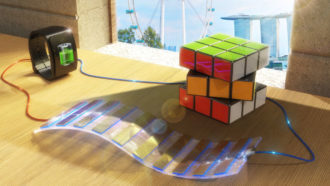 Someday, shadows and light could team up to provide power.

A new device uses the contrast between bright spots and shade to create an electric current. That current can power small electronics, such as a watch or LED lights.

By using shade, “we can harvest energy anywhere on Earth, not just open spaces,” says Swee Ching Tan. He’s a materials scientist who works at the National University of Singapore. Someday, these generators might produce energy in shadowy spots between skyscrapers, he says, or even indoors.

Tan and his team call their new device a shadow-effect energy generator. They made it by coating silicon with a thin layer of gold. Silicon is often used in solar cells that produce electricity from sunlight.

Electrons are one of the particles that make up atoms. They have a negative electric charge. As in a solar cell, light shining on this generator energizes electrons in the silicon. Those electrons then jump into the gold.

Voltage is a measure of electrical potential energy, a type of energy related to an object’s condition (and not its motion). Light boosts the voltage of the lit metal, making it higher than in the dark part of the generator. Electrons flow from high to low voltage. So the difference in light levels creates an electric current. Sending electrons through a circuit makes a flow of current that can power a small gadget.

Each device measures 4 centimeters (1.6 inches) long and 2 centimeters wide. That makes its area slightly larger than a postage stamp. In low light, eight generators powered an electronic watch. These devices also can serve as self-powered motion sensors. For instance, when a toy car passed by, its shadow fell on a generator. That created enough electricity to light an LED.

“This is a creative way to think about how we can make energy from the world around us,” says Emily Warren. She’s a chemical engineer at the National Renewable Energy Laboratory. It’s in Golden, Colo. “Whenever you make energy you have a difference in something,” explains Warren, who did not take part in the new work. Water falling from a high place to a low place can create energy. So can a difference in temperature. Even solar cells rely on a difference in some property. In some solar cells, differences in the material properties can create energy under light.

The team compared its generators to commercial solar cells that are typically used under full sunlight. With half of each device in shadow, the generators produced roughly twice as much power per surface area as the solar cells. But, Warren notes, it would be better to compare them to solar cells meant to work in low light, such as the silicon solar cells in classroom calculators. These are designed to use indoor light. Warren also would like to see the team measure the power the devices make over a longer time, such as a whole day.

Boosting how much light the generators can absorb would allow them to make better use of shadows. So the team is working to improve the device’s performance with strategies that solar cells use to gather light.

“A lot of people think that shadows are useless,” Tan notes. But “anything can be useful, even shadows.”

First drug is found to block the new coronavirus

Could Black Holes Be The Dark Matter Our Universe Needs?

How much do masks help against COVID-19?