A troubled bridge over water in this New Brunswick town

A feisty group of covered bridge advocates in tiny St. Martins, N.B., worry their timber-planked crossing won't outlast a powerful lobby for steel and concrete interests in Fredericton The post A troubled bridge over water in this New Brunswick town appeared first on Macleans.ca. 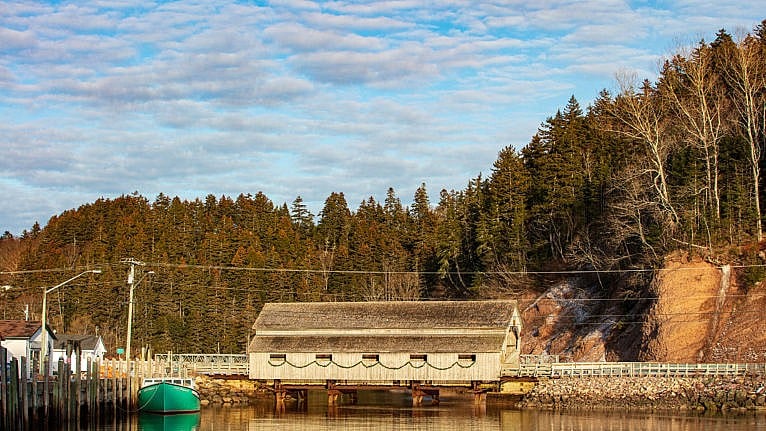 At a summertime rally in 2019, with the fate of a local tourism hot spot up in the air, one in five residents of a New Brunswick community blocked traffic in a show of force. Fully two-thirds of the population signed a petition asking for the landmark’s protection. Some waved hand-written signs: “SAVE OUR BRIDGE.”

The demonstration may sound impressively large, but only about 300 people live in St. Martins, a half-hour’s drive east of Saint John on the Bay of Fundy. Visitors are always streaming in and out, though, getting their portraits snapped at an iconic spot where you can see a lighthouse and two covered bridges—those distinctive timber structures so familiar to East Coasters—in the same frame.

One of them, the bridge spanning Vaughan Creek, is in disrepair (a temporary, single-lane Bailey bridge has been installed for vehicle traffic). Despite local pleas that it be restored or rebuilt, the province has recently approved a new, $3.5-million design that purists suggest is just a poor facsimile. For a village that has long struggled to be heard at the seat of provincial power, it’s a bridge too far.

Protesting the new design is the man behind the 2019 rally, a proud New Brunswicker whose love affair with covered bridges, and with fly fishing underneath them, began during a trip to his sweetheart’s family farm 57 years ago. He still fishes; they’re still married.

“I’ve been looking at these things, and studying them, for a long time,” he says. “Every time somebody wants information about covered bridges, who do they call? Not Ghostbusters, I can guarantee you that. They call Ray Boucher.”

Boucher waxes poetic about the tourism value of bona fide, traditionally built covered bridges. Only 58 are still standing in New Brunswick, 54 of which are managed by the province, and countless sightseeing tours are built around them—one motorcycle club in Fredericton holds a covered bridge “challenge” every year.

Despite his title as president of the Covered Bridges Conservation Association of New Brunswick, which boasts several hundred members, Boucher says government officials won’t give him the time of day, either on Vaughan Creek or on a province-wide covered bridges strategy expected sometime this year.

“We’re basically told we don’t know what we’re talking about. ‘Shut up and we’ll get you across the river.’ And that’s it. Bang. This is how a lot of our association members feel,” he says. “I can’t tell you how many emails I received when the news for the Vaughan Creek covered bridge hit Facebook.” 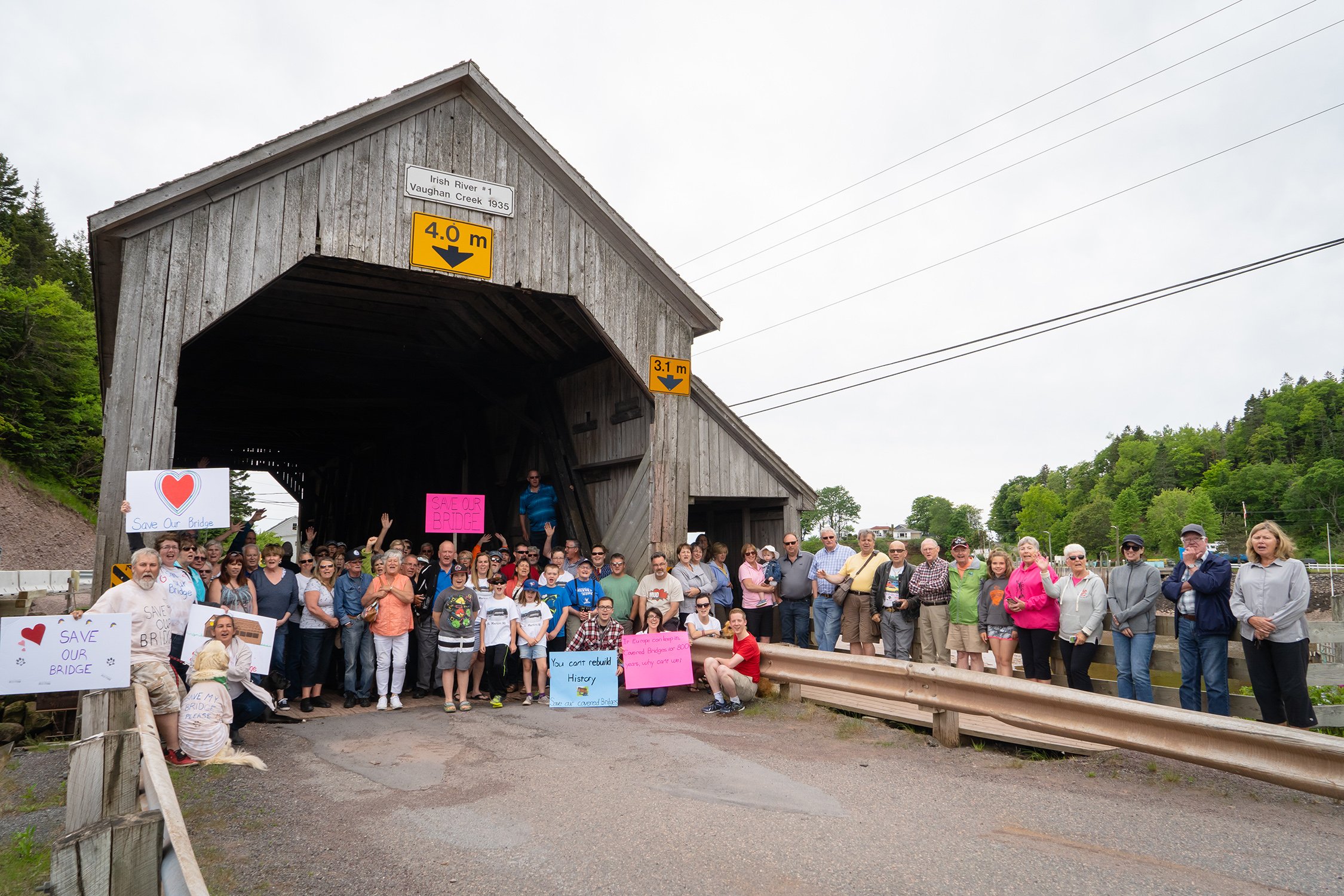 The St. Martins Rally was the start of a province-wide petition signing event sponsored by the Covered Bridges Conservation Association of New Brunswick. (Courtesy of Nicholas Lowe Photography)

Rookie minister Jill Green, who was newly elected last September and vaulted to the transportation and infrastructure file, admits she is not familiar with the arguments of Boucher’s group, but says all options were considered for Vaughan Creek. “We want to be able to support tourism into the St. Martins area, so we’re putting in a solid structure bridge, a modern bridge on the bottom, the sides and the travelway. We’re going to be able to accommodate tour buses and lots of vehicles and traffic both ways. But we’re still going to put the facade of the covered bridge on top,” Green explains. The approved design was deemed the safest for travellers, she says, but still recognizes the bridge’s cultural significance: “Our highest priority is the safety of the public.”

Green’s department says the existing bridge must be dismantled or moved to accommodate the steel replacement, though the minister says no decision has been made about what to do with it afterward.

Dan Tingley, a senior design engineer at Wood Research and Development who has built timber bridges all over the world, doesn’t buy the minister’s rationale. For one thing, the facade won’t fool anyone, he says. “People know better. That’s fake to them. They don’t want it.”

Even if the government decided against repairing the existing bridge, a two-lane replacement made out of the traditional timber, at the same tonnage, meeting the same safety requirements, would only cost $1.5 to $2 million, Tingley asserts. It would perform better on environmental impact and longevity, too. “They’re going to build a bridge 21 times less carbon-efficient. It’ll last 48 years, in a salt environment, when a timber one would’ve lasted 100.”

The government has plenty of evidence to support those assertions, he says—including that neighbouring Nova Scotia has in recent years seen “dramatic” savings from opening tenders up to include an option for timber. Although it feels like the ship has sailed on Vaughan Creek, he and Boucher are holding fast to the hope that New Brunswick will follow suit.

At issue is what Tingley describes as a deep-set mentality among senior bureaucrats whose minds are simply set against timber. He is loath to blame politicians like Green for what he believes is a long-held departmental attitude, exacerbated by a powerful lobby for steel and concrete interests in Fredericton.

But he says the preservation of covered bridges is a “hot-button issue,” emblematic of a deeper divide with real political consequences. “People in rural communities feel that the governments are not in touch with them. They feel that the big cities get the grease, the squeaky wheel,” Tingley says. “The lightning rod is little old St. Martins, where you have this rural group of people pitted against the government of New Brunswick in the matter of a bridge.”

This article appears in print in the March 2021 issue of Maclean’s magazine with the headline, “In the matter of a bridge.” Subscribe to the monthly print magazine here.

The post A troubled bridge over water in this New Brunswick town appeared first on Macleans.ca.