This week, Aerolíneas Argentinas introduced the first Embraer E190 aircraft with a new livery, following the completion of… 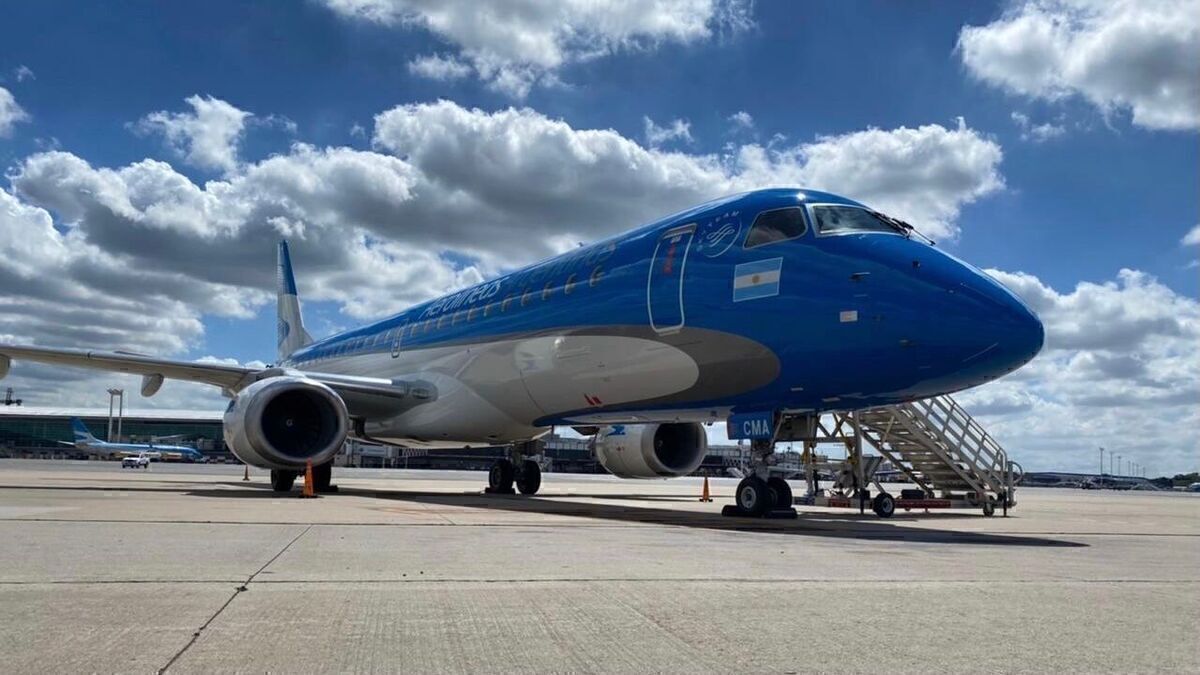 This week, Aerolíneas Argentinas introduced the first Embraer E190 aircraft with a new livery, following the completion of the merger with Austral Líneas Aéreas. The airplane, registration LV-CMA, is one of 26 Embraers that the state-owned carrier currently has.

Last year, the Argentinian Government announced the merger of its two State carriers, Aerolíneas Argentinas and Austral. The two companies are now working under the Aerolíneas brand, giving an end to Austral’s seven-decade history.

As part of the process, Aerolíneas Argentinas absorbed the entire fleet of Austral, composed of 26 Embraer ERJ-190 planes. The next step was to drop Austral’s former livery and repaint them under the sky blue colors of Aerolíneas.

The painting work for LV-CMA was completed at the facilities of Fábrica Argentina de Aviones in the city of Córdoba. The airline said that repainting the E190 fleet is one of the main rebranding actions of the merger. It expects that the new liveries will have a significant impact on the public and passengers.

Aerolíneas has not given a timetable for the repainting of the remainder of the E190 planes.

When will the Embraer E190 fly?

Currently, Aerolíneas Argentinas is flying with a 65% decrease in the number of domestic passengers it had one year ago before the COVID-19 pandemic struck in Latin America.

In January and February, the airline recovered a fair amount of passengers, despite the growing cases of COVID-19 in Argentina. Nevertheless, it is still a long way from having a full recovery from the crisis.

Aerolíneas Argentinas is not operating its Embraer fleet at the moment. But, LV-CMA does have scheduled a flight soon. The airline said in a press release seen by Simple Flying,

“It is worth mentioning that this is the same aircraft that will soon operate its maiden flight at the reopening of the Jorge Newbery Airport.”

This airport, the second most important in the country, will open on March 15. It was closed for eight months because the Argentinian Government was doing some repairs to it. Plus, the Government used the COVID-19 crisis to shut the airfield down as it wasn’t needed with the lack of demand.

Aerolíneas hasn’t said where LV-CMA would fly, but it will be a domestic operation. The Jorge Newbery Airfield is primarily a domestic hub, although it is set to receive a few international operations from Brazil, Paraguay, Uruguay, Chile, Bolivia, and Peru.

With the Austral merger, Aerolíneas Argentinas increased its fleet size. The company now has four different types of aircraft from three OEMs.

These are the number of seats each aircraft has:

Do you want to travel onboard Aerolíneas Argentinas’ Embraer fleet? Let us know in the comments.

Air Astana To Resume Domestic Flights From May 11