Rocket Lab was set to start its busiest year with the dedicated launch of a… The post Another One Leaves The Crust waits for new date to begin busy year for Rocket Lab appeared first on NASASpaceFlight.com. 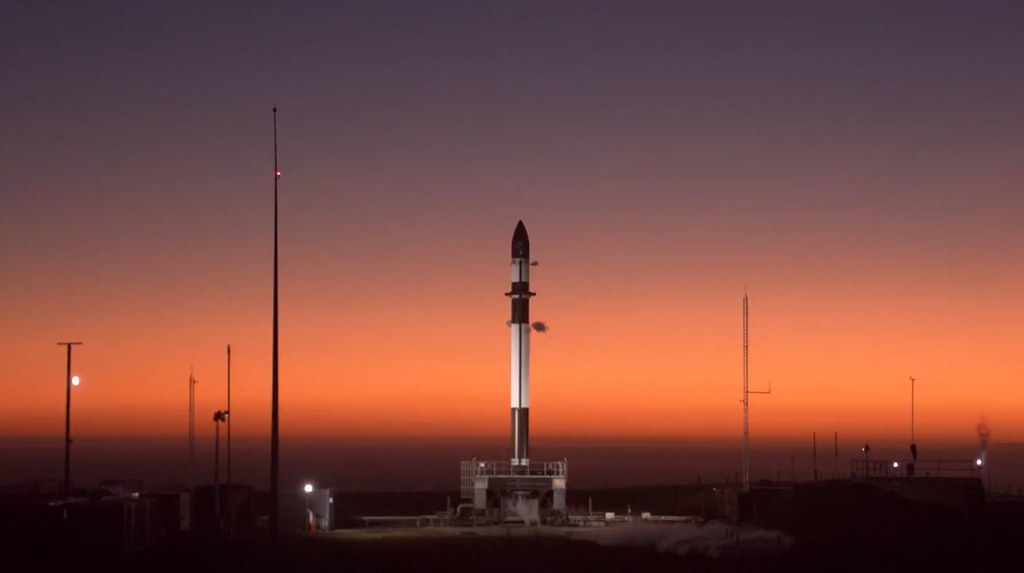 Rocket Lab was set to start its busiest year with the dedicated launch of a micro-satellite aboard their Electron rocket for OHB Group on Saturday until a scrub was late in the countdown due to a sensor issue.

Named “Another One Leaves The Crust,” the mission was set to launch at 02:44 EST (07:44 UTC) on Saturday, January 16 from Rocket Lab’s Launch Complex 1A on New Zealand’s Māhia Peninsula.  A new launch date will be announced later> However, due to mission requirements, the daily launch window is only four minutes long, closing at 02:45 EST (07:45 UTC).

This will be the 18th launch of the Electron rocket overall, the first of at least nine announced  missions for this year, and the first mission for the company demonstrating a rapid contract to launch period.

The flight was contracted by OHB Cosmos International Launch Services GmbH in August 2020 for a launch in “early 2021,” thanks to Rocket Lab’s production ability to accommodate such rapid-request missions as long as they use the standard payload fairing for the rocket.

The larger payload fairing option is a special order and cannot support such short mission integration timelines as previously noted by Rocket Lab.

The flight continues to showcase Electron’s ability to serve as either a rideshare for multiple small satellites all needing to go to the same general orbit or as a dedicated, single satellite/single customer launcher.

This is one of the latter, with the “Another One Leaves The Crust” mission taking a single satellite to orbit.

The communications microsatellite for the Germany-based OHB Group will be the 97th satellite launched by Rocket Lab and will test dedicated frequencies the Group hopes to utilize in future satellite and orbital communications services.

The satellite was built by OHB Group’s satellite manufacturers in Germany, Sweden, and the Czech Republic and requires a 90 degree polar orbit.

Mission integration began in August 2020, with a preliminary launch target of “early 2021.”

On January 11, the satellite was encapsulated inside its payload fairing and mated to the rocket inside one of two integration hangers at LC-1.

This was followed by a successful Wet Dress Rehearsal of Electron, a routine procedure before missions where the launch team takes the rocket, ground systems, and themselves through an entire countdown up to but not including engine ignition.

For launch operations, the countdown will begin at T-4 hours, 22:38 EST on January 15 (02:38 UTC on January 16) when the road to the launch site will be closed and the Electron rocket will be raised vertical on Launch Complex-1A. 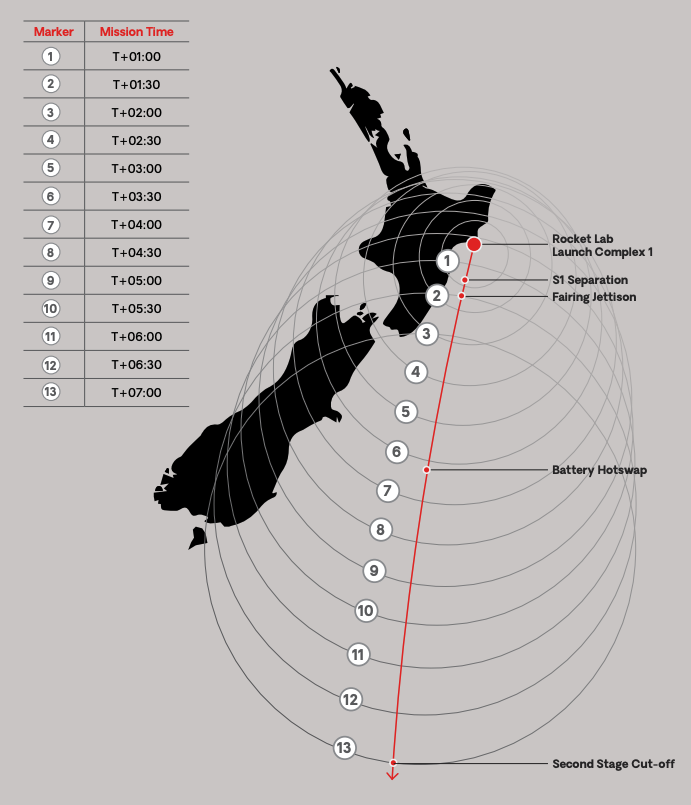 Visibility and time map for the Another One Leaves The Crust mission. (Credit: Rocket Lab)

Shortly after, teams will fuel ambient temperature RP-1 kerosene into the vehicle.

At T-2 hours 30 minutes, teams will evacuate the area via helicopter.  Safety zones will become active for designated marine space at T-2 hours to launch, with airspace closures following at T-30 minutes.

Two seconds before liftoff, the nine Rutherford engines on Electron’s first stage will ignite and reach full thrust, which occurs almost instantly due to their electric-driven turbopumps.

When Electron lifts off the pad, it will perform a pitch and roll maneuver to place itself onto the correct heading to reach the mission’s intended 90 degree inclined orbit.

At 2 minutes 30 seconds into flight, all nine Rutherford engines will shut down and Electron’s first stage will separate with the help of pneumatic pushers.  This will be followed seconds later by ignition of Electron’s second stage, vacuum-optimized Rutherford engine.

The payload fairings, which protect the satellite from crushing aerodynamic forces and heating during flight through the dense lower atmosphere, will separate and expose the payload to the vacuum of space just prior to three minutes into flight.

The initial 8 minute 45 second ascent will leave the kick stage and payload in an elliptical Earth orbit. 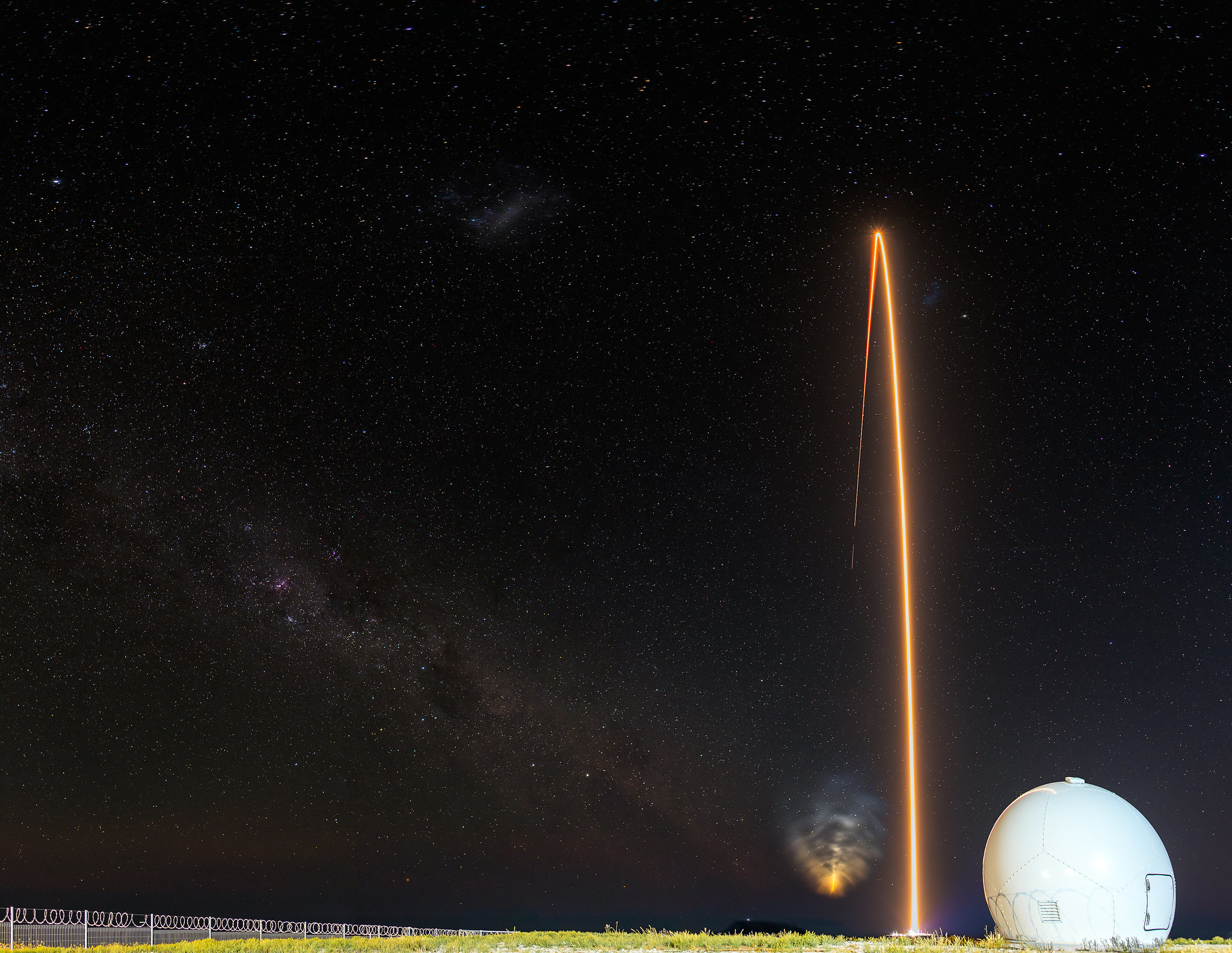 “The Owl’s Night Begins” mission streaks to orbit under the cover of darkness in December 2020. (Credit: Rocket Lab)

After a near hour-long coast, the kick stage will then ignite its engine for a 3 minute 21 second burn to finalize the orbit for payload deployment.

The OHB Group satellite will separate 1 hour 10 minutes after liftoff; the kick stage will then perform a deorbit maneuver, bringing the mission to a close.

Like Electron’s previous mission in December 2020, Rocket Lab will not attempt to recover the first stage.

Hardware inspections, testing, and reflight certification for some components of the first booster successfully recovered from the “Return To Sender” mission in November 2020 continue.

It’s possible, per Rocket Lab CEO Peter Beck, that some components from that booster might refly this year.  It is also a near assurance that additional recovery attempts will be conducted as Rocket Lab continues to move toward the goal of making Electron reusable — something that will not just lower the cost of the system but increase launch cadence and flight opportunities to customers as well.

All this points to a very busy 2021 for Rocket Lab.

In addition to the announced flights, the company will debut two new launch pads: Launch Complex 2 at the Mid-Atlantic Regional Spaceport in Virginia, USA, and Launch Complex 1B on the Māhia Peninsula, NZ.

Of the missions announced for this year, perhaps the most anticipated is NASA’s CAPSTONE flight to a near rectilinear halo orbit of the Moon in April from LC-2 in the U.S. 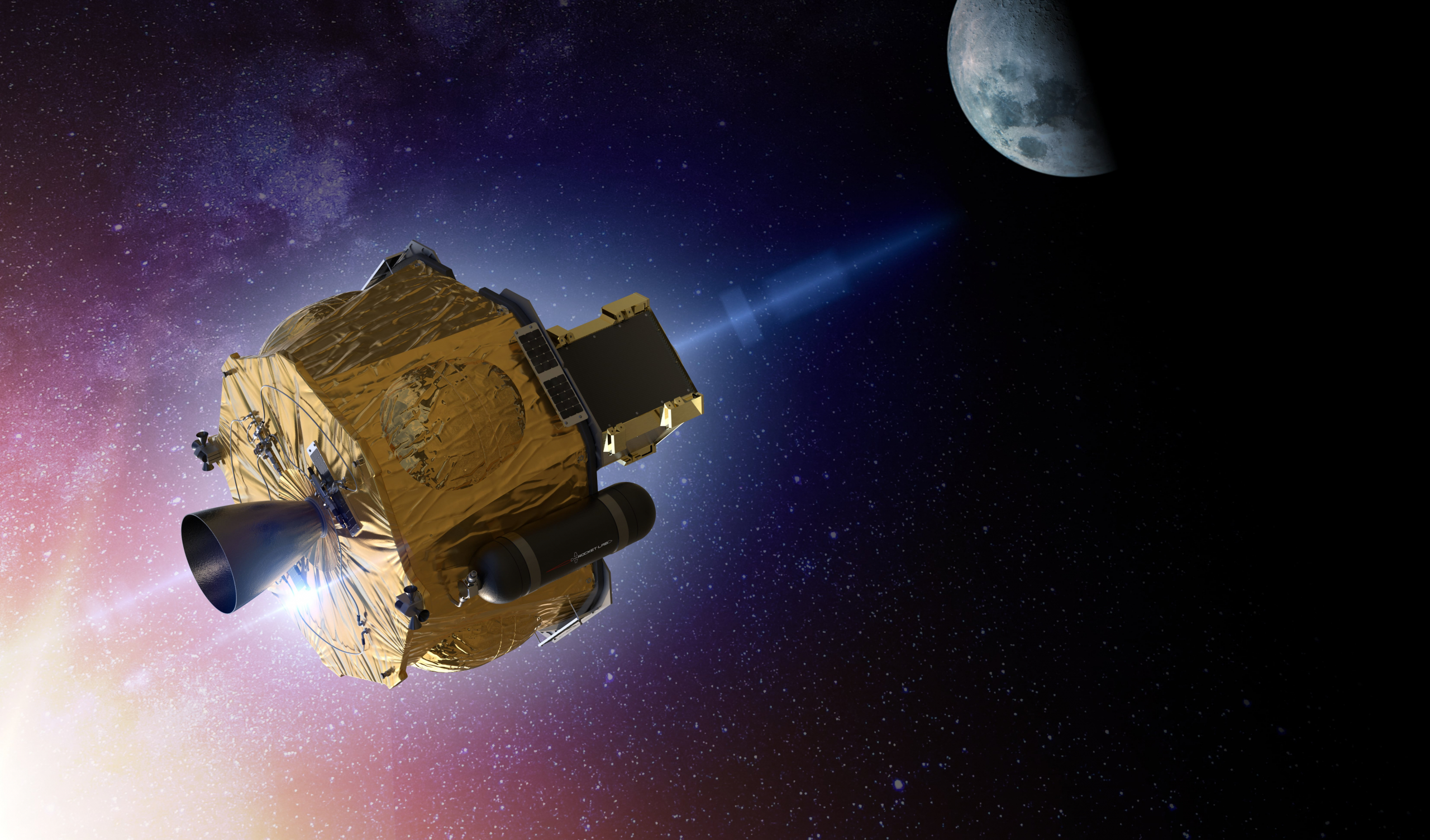 CAPSTONE stands for Cislunar Autonomous Positioning System Technology Operations and Navigation Experiment.  The CubeSat is part of the overall Artemis program in that it serves as a pathfinder mission that will investigate the region of space around the Moon the NASA-led Gateway and other orbiting outposts will operate in.

Preparations for this mission’s launch are well underway; in early December 2020, Rocket Lab’s Photon spacecraft began its qualification program.  During these tests, Rocket Lab exposes Photon to the sounds and vibrations Electron will impart to it during launch, along with vacuum as well as temperature swings it will experience in space.

Photon will serve as the trans-lunar injection, or TLI, stage that will propel CAPSTONE out of Earth orbit.

The post Another One Leaves The Crust waits for new date to begin busy year for Rocket Lab appeared first on NASASpaceFlight.com.

Rocket Lab rolls out first Electron at LC-2 ahead of Q3...

Setting the Standards for Unmanned Aircraft