Shipyards in Asia are expanding their range of yachts at both ends of the size scale, diversifying into power and sailing catamarans, and including this region among their target markets, as profiled in Yacht Style’s annual feature on Asia’s builders. The post Asia’s Yacht Builders: Thriving Home and Away appeared first on LUXUO. 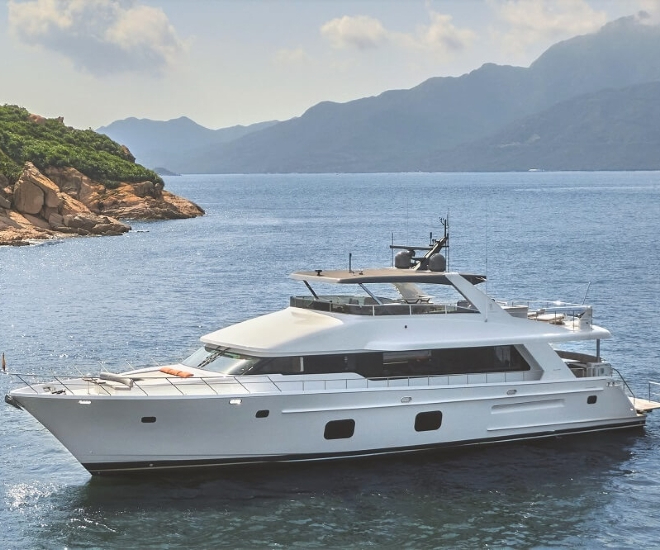 CL  Yachts is showing its flagship CLB88 and hull six of its popular CLB72 at this year’s Palm Beach International Boat Show in Florida (March 25-28) as the brand from the historic Cheoy Lee yard headquartered in Hong Kong continues its remarkable journey.

However, CL Yachts is also using the year’s first major international boat show to reveal more details of its upcoming CLB65, which will be its new entry-level yacht and is being produced in the shipyard’s main production facility west of Zhuhai.

Set to debut in the fourth quarter of 2021, the CLB65 features a RINA-certified resin-infused composite hull designed by Howard Apollonio of Apollonio Naval Architecture in collaboration with structural engineer Gurit, the two design offices who both worked together successfully on the CLB72.

The CLB65, which can be CE certified upon request, features strategic use of carbon-fibre, while the first unit will be configured with twin Volvo IPS1050 pods and feature an at-rest electric fin stabiliser.

CL Yachts has designed the exterior and layout in-house, with an aft galley among notable differences to other models in the CL Yachts range, while the “light and airy interior design scheme” is by Interiors by Carmen, which also worked on the CLB72. Notable features include opening saloon windows, while the lower deck features three staterooms and a convertible crew cabin.

As well as developing its smallest model, the builder has been constructing its biggest model, with the much-anticipated CLX96 on schedule to launch this summer before it travels to the US for its world premiere at the Fort Lauderdale International Boat Show from October 27-31.

The yacht is the first to feature both an exterior and interior by Milan-based Jozeph Forakis, while Americans Earl Alfaro and Albert Horsmon are responsible for naval architecture and structural engineering respectively.

Billed as an ‘SAV’ (Sea Activity Vessel), the CLX96 features a ‘workboat chic’ profile defined by trawler-style, reverse-angle windscreens on the main and upper decks. The reverse-angle design is even mirrored at the aft end of the main-deck superstructure, ensuring the yacht stands out from its competitors.

Other distinctive features include a vertical bow and a teardrop-shaped hull that’s wider in the forward part than the aft, while cleverly designed exterior spaces include the foredecks on both the main and upper decks, known as Piazza del Sole and Terrazza Portoghese respectively.

“The design is unique, fresh, modern and exciting, and challenges the perception of what people expect from a motor yacht,” Forakis said. Like the CLB88, the CLX96 is expected to move from the Zhuhai shipyard and make an appearance in Hong Kong before heading to the US. Also like the CLB88, the CLX96 has been crowned at the Good Design Awards organised by the Chicago Athenaeum Museum of Architecture and Design.

Martin Lo, Director of CL Yachts, said: “At CL Yachts, we are thrilled to be back-to-back Good Design Award winners. Not only is it a prestigious honour but two consecutive wins validates everything we’ve been doing so far. We began this journey three years ago with a strong vision: to advance the luxury experience for modern explorers. Jozeph Forakis and his design team understood this vision and continue to exceed expectations every time.”

Meanwhile, hull seven of the CLB72 is scheduled for sea trials from April before it heads to Hong Kong and then the US shortly afterwards. The CLB72 was the brand’s second model, after the CLA76, and has proved its most popular so far, with Apollonio developing the concept and exterior styling, as well as working with Gurit on the RINA-certified, resin-infused composite hull, which can reach 31 knots with twin Volvo IPS1350 1,000hp engines.

All CL Yachts models are built at Cheoy Lee’s 12-hectare shipyard on the Pearl River in Zhuhai, which includes 85,700sqm of covered production facilities that support construction in steel, fibreglass and aluminium.

Kingship Marine, also headquartered in Hong Kong with a shipyard in the Greater Bay Area, is developing a range of KingCAT power catamarans that span in size from the 55 and 85 models to the enormous KingCAT 138. The shipyard plans to first build the KingCAT 55, with an expected launch in 2022.

The company was founded in 2004 by Roger Liang and has its main production facility in Zhongshan, just north of Macau and a ferry ride from Hong Kong. Liang was involved in Italian shipyard Baglietto in the 1980s and Green Bay Marine in Singapore in the 1990s before creating Kingship.

Kingship works with several of the world’s leading brokerage companies including Northrop & Johnson, Camper & Nicholsons and Denison Yachting, and has a strong background in superyachts, having built a range of models from 89-137ft featuring naval architecture by renowned Dutch firm Vripack.

Its current projects include the Grand Voyager 144, which has an overall length of 43.9m, naval architecture by Horacio Bozzo and a range of 5,500nm at 15 knots.

In 2019, Kingship delivered a towering 78ft tri-deck powercat that has been used privately on a lake in China, although the shipyard’s primary business has been building commercial craft including large, high-speed catamaran ferries. These include powerful 42m models with a cruising speed of 33-35 knots that provide the underlying hull shape and platform for the KingCAT 138.

Kingship has a new range of smaller boats for the Asia-Pacific market including a 42ft landing craft-style yacht, a 39ft offshore expedition centre console with a top speed of 50 knots, and a 40ft displacement cabin-cruiser design that offers very economical performance. It also plans to offer yachts and boats with electrical-propulsion systems certified by CCS (China Classification Society).

In addition to new builds, the shipyard is a specialist in refit and repair, with extensive experience of working on boats ranging in size and style from a Swan 82 sailing yacht and a 25m wooden motor yacht to several superyachts up to 49m.

Kingship can build and work on yachts up to 500GT, as the Zhuhai site features seven 50m weather-controlled sheds and a Syncrolift that can take yachts up to 60m. The company is currently in the process of applying for a permit to install a fixed and floating dock, with the latter allowing for 60-80m boats to be built and repaired at the yard.

Heysea remains mainland China’s most prolific superyacht builder and has been a fixture in the top 30 of the Global Order Book since 2014, ranking 17th in the 2021 edition. Founded in 2007 and based in a 66,700sqm facility in Jiangmen in Guangdong province, Heysea has had a remarkable year since the previous edition of this annual feature.

In March 2020, the yard launched its first Asteria 126, fitted with twin 1,925hp Caterpillar engines. That same month, the company sent masks to its friends in the UK, Slovenia, Australia, Italy, France and the USA to help them during Covid-19.

In the second quarter of the year, HeySea launched hulls nine and 10 of its remarkable Asteria 108, a model fitted with either twin 1,800hp or 1,900hp Caterpillar engines for a top speed of 22-23 knots. The ninth hull was delivered to her owner at the Sevenstar Yacht Club in Shenzhen, while hull 10 headed to Hong Kong.

In July, it handed over its biggest-ever yacht, the 43m Yu Feng Zhe 1, a champagne gold-coloured, steel-hulled 701GT power catamaran with twin Volvo 725hp engines built for an owner in Shenzhen.

In mid-October, Heysea attended the four-day SMC International Yacht Show in Shenzhen, where it showcased hull nine of the Asteria 108. It also unveiled details and designs for the Seaview 56, an 18m sailing catamaran with an 8.8m beam featuring an exterior by Bill Dixon and an interior by Paolo Dose of VYD (Venetian Yacht Design).

The yard’s current projects include the first two hulls of the Asteria 142, while it’s also developing a design for a potential 56m project.

Heysea remains committed to having a presence at international boat shows and intends to return this year to the likes of Sydney, Fort Lauderdale and Cannes, where Chairman and co-founder Allen Leng was present in 2019 when the builder exhibited for the first time, with a booth. Leng, who majored in naval architecture and ocean engineering, has been Vice-Chair of the ISO’s Large Yachts division since 2018.

SKR, and SKAYR, both represent the initials of the company’s principals – Managing Director Firman Santoso, naval architect Nino Krisnan and Renanda. Since initial designs were revealed for the 40ft sports cruiser (YACHTS, Issue 55), the layouts have been refined for the cockpit and interior, which includes a stylish, air-conditioned double cabin, head and shower.

Furthermore, the propulsion system has been revised to feature twin 480hp Volvo Penta IPS650 engines, which are expected to produce a top speed of 40 knots. There will be the option of genset and battery, to offer silent operation at anchor and reduce the carbon footprint.

Once the designs are finalised, the first unit could start building in Europe in the second quarter of this year and launch in the third quarter of 2022, while SKAYR is considering also developing a model in the 50-60ft sector.

The SKR 40 Renanda will be targeted at clients in Asia, Europe and North America, with SKAYR potentially exhibiting with a booth and scale model at the Cannes Yachting Festival this September.
www.clyachts.com
www.kingship.com
www.heyseayachts.com
www.skayr.com

Note: For a PDF of the original article in Yacht Style Issue 58, download from the link below

The post Asia’s Yacht Builders: Thriving Home and Away appeared first on LUXUO.

How we got into boating: Hugo, Jack and Nick share their earliest boating memories

How much does it cost to run a boat? Nick reveals the total...