Astronauts may be able to make cement with their own pee

Lunar dust and a compound found in urine might one day be used to build future dwellings on the moon, a new study finds. 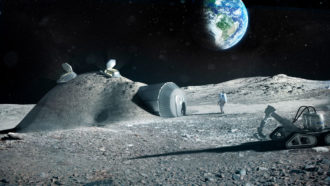 Future astronauts could make lunar buildings out of moon dust and pee.

That’s the suggestion of chemist Anna-Lena Kjøniksen and her colleagues. They made a cement from urea and faux lunar soil. Urea (Yu-REE-uh) is a major component of urine.

When humans take up long-term residence on other planets or the moon, they will need to pack light. That’s in part because sending materials from Earth is expensive. NASA has estimated that every pound of material sent into Earth orbit costs about $10,000.

Tapping into local resources could keep costs down. Researchers have suggested using lunar soil to make concrete or cement. Astronauts could then 3-D print their dwellings with this material. But most cement requires a lot of water, which is scarce on the moon. And water is awfully heavy to haul into space.

Explainer: What is 3-D printing?

On Earth, builders can add a chemical to reduce the amount of water needed in cement. This additive is called a super-plasticizer. It works by keeping a drier mix from getting too crumbly. It also leaves the mix flexible enough to be used in a 3-D printer. But most superplasticizers are organic compounds, meaning rich in carbon. These, too, are in short supply on the moon, says Kjøniksen, of Østfold University College in Halden, Norway.

“I was thinking, what’s available on the moon? If you add humans,” she wondered, “then what do you have available?” Then it hit her. Maybe human waste could turn into something useful.

Kjøniksen had previously used urea to make plastic mixtures less viscous, or thick. Urea breaks hydrogen bonds between molecules. That reduces friction and lets the molecules slide past each other more easily. She’d never heard of someone using it in cement, “but I thought it was worth a try.”

Her team mixed that powder with powdered urea. It was not distilled from real urine. They bought their urea from a chemical supply company. They topped off this mix with some water to make the cement. Compared with two other superplasticizers used in construction projects on Earth, “the urea worked very well,” Kjøniksen reports.

The mixture held its shape under light weight and withstood temperature changes. Extruding the cement through a tube and stacking several layers on top of each other using a 3-D printer made a tiny, stable wall. The team shared its findings in the February 20 Journal of Cleaner Production.

Kjøniksen plans to test the cement in more extreme temperatures and in a vacuum chamber that mimics the moon’s lack of atmosphere. The next step would be scaling the wall up to a more realistic size. She also wants to test whether future astronauts would have to purify urine, or if they could use pee directly to make the cement.

In real life, making urea cement will probably be more complicated than just peeing in a bucket, says Belinda Rich. She’s a materials scientist at the European Space Agency in Noordwijk, the Netherlands. She was not involved in this study but is working with Kjøniksen’s group on follow-up tests. But overall, she says, making cement with urea on the moon could be practical.

Undeniable Science: Police Tactics Are Worsening The Spread Of Coronavirus

What Are The Fifth And Sixth States Of Matter?

Methane’s Rising: What Can We Do to Bring It Down?

Should You Explain To An Expert Why Their Professional...

Why sports are becoming all about numbers — lots and lots...

5 Ways To Explore A Planet That Surpass Martian Helicopters