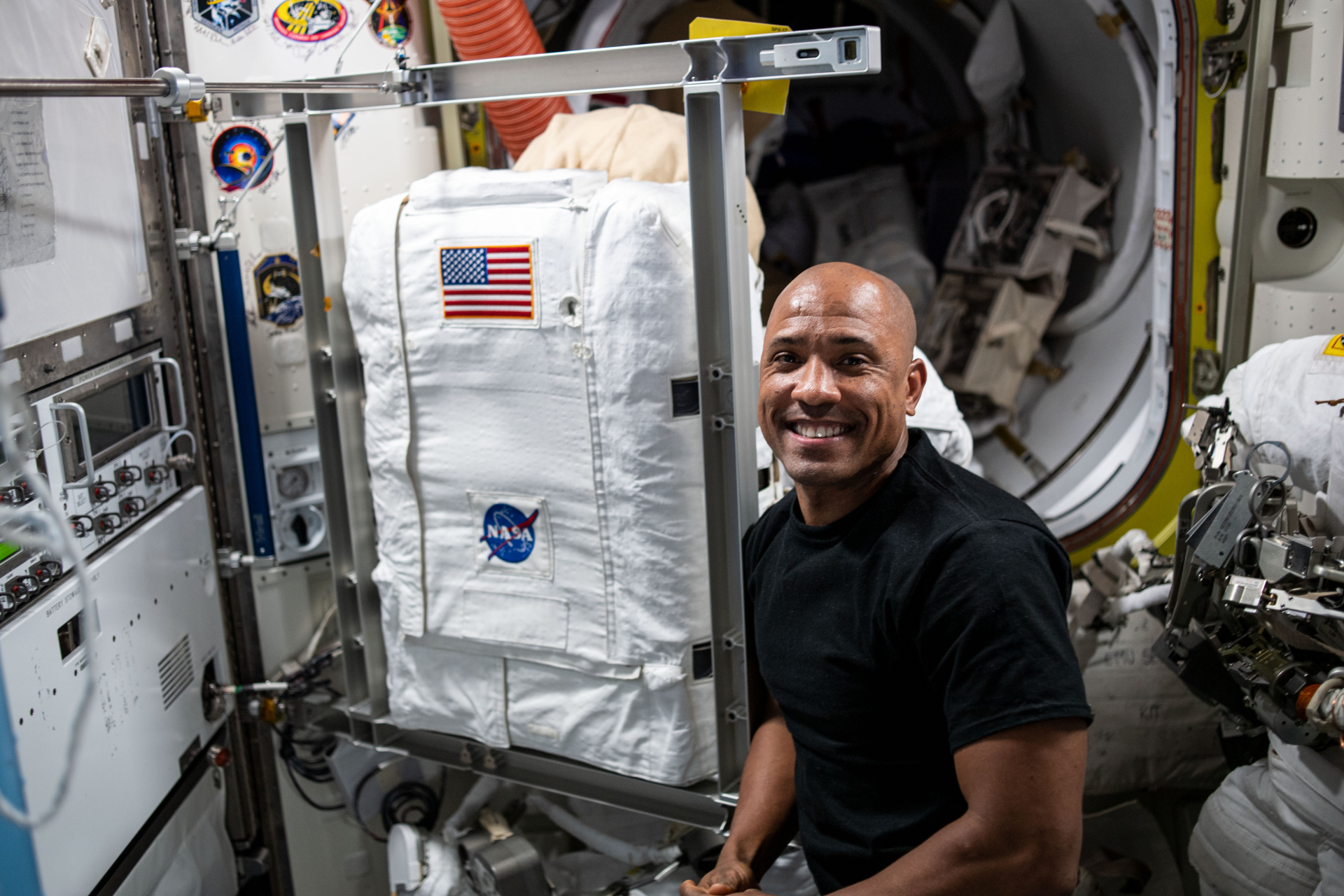 Expedition 64 Flight Engineers and NASA astronauts Michael Hopkins and Victor Glover are conducting a spacewalk on Wednesday, having been tasked with setting up a cable and antenna for the “Bartolomeo” payloads platform, configuring a Ka-band terminal for linkage to European ground stations and removing grapple fixture brackets in preparation for future power system upgrades. EVA-69 began at approximately 06:30 EST (11:30 UTC).

This EVA (extravehicular activity) is the third for Hopkins in his NASA career and the first for Glover. Hopkins is extravehicular crew member one (EV-1) donning EMU 3006, which features red stripes. Glover (EV-2) wears EMU 3009 (sans stripes) during the excursion.

Following hatch open and egress from the Quest airlock, Hopkins will begin translating to the Columbus module in preparation for the start of the day’s tasks. At the same time, Glover will ingress the Space Station Remote Manipulator System (SSMRS) – also known as Canadarm2 – and move to the worksite.

The first order of business for the two American astronauts will be installing the Columbus Ka-band terminal (ColKa) on the exterior of the European laboratory module.

This will involve removing and reinstallation of four bolts from the module’s exterior panels to allow for the placement of the terminal, and the routing of external wiring for power to the antenna.

This Ka-band antenna will link the module to the EDRS (European Data Relay System) network of satellites in geostationary orbit, thereby enabling faster uplink and downlink speeds between the European segment of the International Space Station and researchers on the ground.

The antenna was designed and built by British, Italian, Belgian, Canadian, French, German, and Norwegian companies. Some components used for the system were qualified by the European Space Agency‘s Advanced Research in Telecommunications Systems (ARTES) program, and experience from ColKa will inform future development of the Lunar Gateway station. 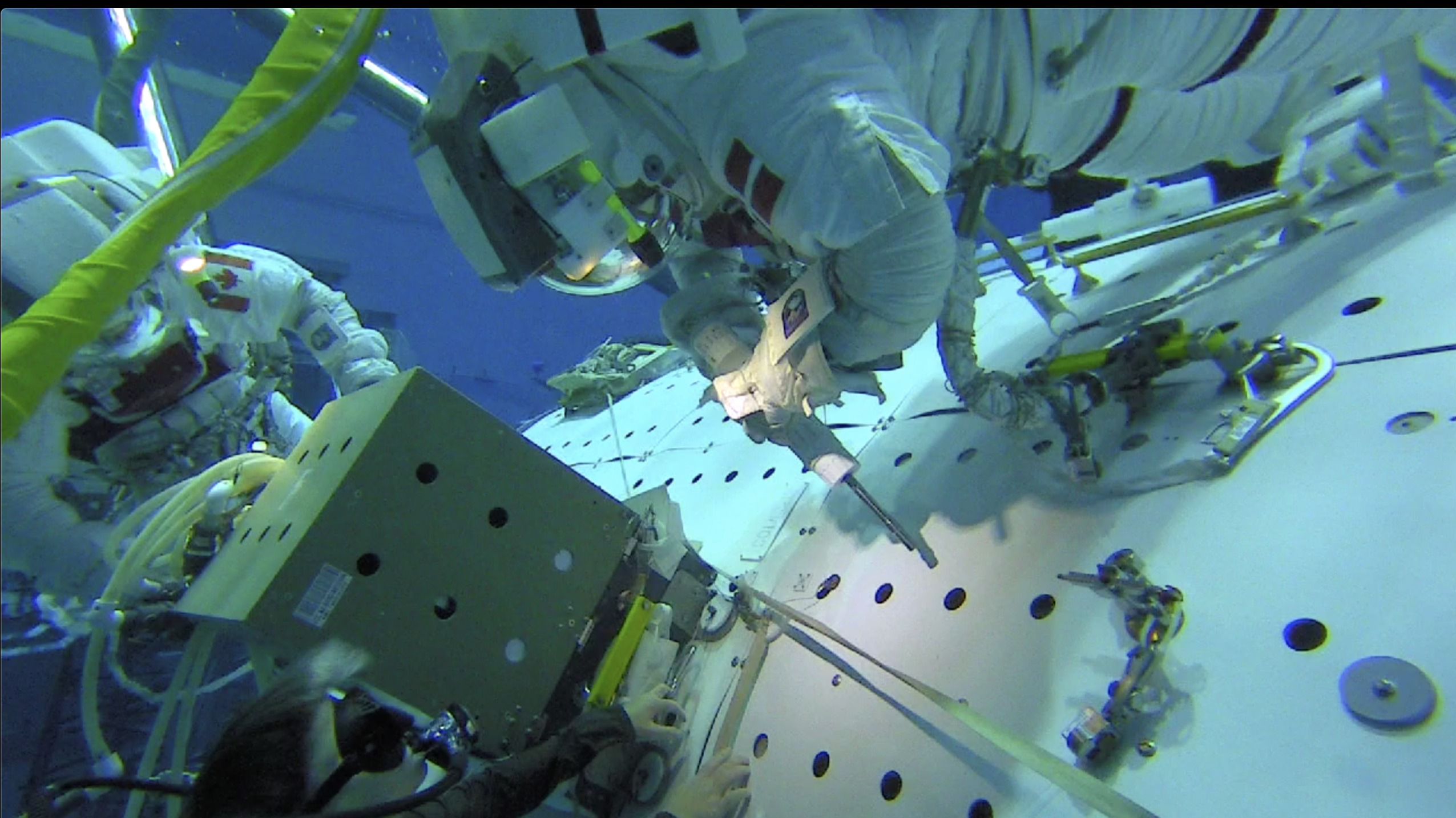 ESA astronaut Andreas Mogensen installs the ColKa terminal during a dress rehearsal in the Neutral Buoyancy Laboratory at NASA’s Johnson Space Center in Houston, Texas, in 2018 – via ESA

The next step for the crew will be to release several clamps on the European Bartolomeo science payload platform that are holding lengths of cabling in place. Once the clamps have been released, the cables will be routed and installed on separate locations on the Columbus module, which will activate the Bartolomeo platform and its communications antenna.

Bartolomeo was delivered to the Station via a SpaceX Dragon spacecraft in March 2020 and installed on the external forward side of the Columbus module the following month. Once online, Bartolomeo will house several commercial payloads externally for data collection.

Once the cable and antenna configuration is complete, Hopkins and Glover will return to the ColKa terminal and remove a cover, meant to protect the antenna inside during installation. This cover will then be jettisoned overboard by Glover while on the SSMRS, as it is no longer needed.

The two astronauts are then slated to return to the Quest airlock to reconfigure their toolbags in preparation for the third and final task of the EVA, which will involve the removal of grapple fixture brackets on the Station’s P6 (far port) truss. This will allow for the installation of future upgrades to the orbiting outpost’s solar arrays.

Following their removal, the fixture brackets will be placed inside the astronauts’ toolbags and taken back inside the Station following the completion of the EVA.

Once the main tasks are complete, Hopkins and Glover will spend the remainder of the EVA performing get-ahead tasks for the following spacewalk, provided that there is enough time and consumables remaining to do so.

Upon completion of the EVA, the crew will return once more to the Quest airlock, ingress, and doff their suits.

Victor Glover (left) and Michael Hopkins (right) in front of a SpaceX Crew Dragon mockup at NASA’s Johnson Space Center in Houston, Texas. Glover and Hopkins launched on the SpaceX Crew-1 mission and will complete a pair of spacewalks before returning to Earth. – via NASA

EVA-69 is the first in a pair of spacewalks that Hopkins and Glover will perform in the space of five days, with EVA-70 set to take place on February 1. During EVA-70, Hopkins and Glover will install a lithium-ion battery adapter plate and replace/install cameras on the Station’s starboard truss and Destiny modules, respectively.

EVA-69 and 70 are the first two spacewalks conducted by astronauts launched on a commercial spacecraft, with both crew members having launched aboard SpaceX’s Crew Dragon. They are the 233rd and 234th spacewalks in support of the International Space Station program.

These two spacewalks are scheduled to be followed by two other EVAs in the near future. During the third spacewalk, Glover and fellow NASA astronaut Kate Rubins will work outside the ISS to prepare its power system to install six new solar arrays built by Deployable Space Systems and provided by Boeing. These panels will be transported to the station via three SpaceX Cargo Dragon vehicles and installed on later EVAs.

Rubins and Japan Aerospace Exploration Agency (JAXA) astronaut Soichi Noguchi will continue upgrading Station components and performing maintenance for the fourth upcoming spacewalk. The dates for the third and fourth EVAs will be set at a later time.

The post Astronauts to upgrade Columbus laboratory during spacewalk appeared first on NASASpaceFlight.com.

It Takes a Nation to #LaunchAmerica!

UAE makes history as Al-Amal arrives at Mars for two-year...