Part spider silk, the material is better than what some spiders make. Researchers think it might make the basis for surgical threads or unusually strong fabrics. 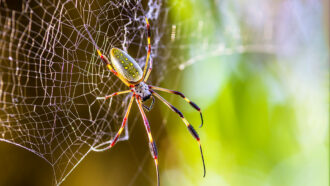 Scientists have long dreamed about making synthetic spider silk and turning it into all types of lightweight materials, from super-strong fabrics to surgical threads. But while making silk may be easy for spiders, it’s proven very hard for engineers. Now a group thinks they’ve finally done it. Their trick: enlisting the help of bacteria.

The resulting artificial silk is stronger and tougher than what some spiders can make.

“For the first time, we can reproduce not only what nature can do, but go beyond what natural silk can do,” says Jingyao Li. He’s one of the chemical engineers who worked on the product.

His team at Washington University in St. Louis, Mo., described how they did it in the July 27 ACS Nano.

Nanocrystals are the key to strong silks

Proteins are the complex molecules that give living things their structure and function. A spider’s silk-making proteins, called spidroins, form in its abdomen as a dense liquid. Spinnerets, body parts on the spider’s rear end, spin the liquid into long threads. Silk-protein molecules are arranged in a tight, repeating structure called a nanocrystal. Spanning a few billionths of a meter (yard) across, these crystals are the source of spider silk’s strength. The more nanocrystals in a fiber, the stronger the silk thread will be.

Explainer: What are proteins?

A common problem scientists have faced is creating fibers with enough nanocrystals to form silk. Explains Li, “What happens in the spider’s silk gland is quite complex and super delicate — difficult to fully reproduce.”

A few years ago, a fellow researcher, fused two sets of spidroin proteins. This created a structure with lots of nanocrystals. Li’s team also knew one particular protein — amyloid (AM-ih-loyd) — can boost crystal-making. Li and his boss at Washington University, Fuzhong Zhang, wondered if they could combine amyloid with spidroin to make a very long hybrid protein that would readily shape itself into nanocrystals. They called this hybrid an amyloid-protein polymer.

Polymers are chain-like molecules made of repeating links. Common bacteria have been making proteins in science labs for years. Li likens the microbes to “little factories” for proteins. His team decided to harness these single-cells microbes to make its hybrid protein.

DNA is the genetic code that gives all individuals their traits. The researchers started by inserting a piece of foreign DNA into the bacteria. The team chose to work with Escherichia coli. That’s a common bacterium found in the environment and the human gut.

For that DNA, the engineers turned to the female golden orb weaver (Trichonephila clavipes). It’s also known as a banana spider or golden silk spider. These females spin some of the largest webs in forests of the southern United States. The dragline silk that holds up their webs appears to be delicate floss. But it is stronger and stretchier than steel. It has to be. This web must be tough enough to hold any insect prey it catches, together with the weaver — which can reach 7 centimeters (nearly 3 inches) long — and her mate.

Starting with the spider’s DNA, the researchers subtly tweaked it in the lab before inserting into the bacteria. Afterward, as hoped, this microbe made the hybrid protein. Then the researchers turned it into a powder. When clumped, it looks and feels like white cotton candy, Li says.

Spinning the fiber and testing its strength

Scientists cannot yet copy the web-spinning action of a spider’s spinnerets. So they take a different approach. First, they dissolve the protein powder in a solution. This mimics the liquid silk in a spider’s abdomen. Then they push that solution through a fine hole into a second solution. This makes the protein’s building blocks fold and arrange into fibers.

To test their strength, the engineers pulled the fibers until they broke. They also recorded how long a fiber stretched before snapping. This ability to stretch meant the fibers were tough. And the new hybrid silk beat some natural spider silks in both its strength and toughness.

Making the synthetic silk “is easier and less time-consuming than previous processes,” Li now reports. And to his surprise, “The bacteria could produce larger proteins than we expected.”

Young-Shin Jun, another chemical engineer at Washington University, showed this using X-ray diffraction. The technique beams super-short wavelengths of light into a crystal to image the arrangement of it atoms in a crystal.

Longer polymers, with more interconnected parts, tend to create a fiber that’s harder to bend or break. In this case, Li says, “It has better mechanical properties than natural spidroin.”

Anna Rising is a biochemist at the Swedish University of Agricultural Sciences in Uppsala and the Karolinska Institute in Stockholm. She, too, has been working to create artificial spider silk. She views the work by Li’s team as a big step forward. It’s new protein fibers, she agrees, are both strong and stretchy.

“The next challenge may be to get the bacteria to produce more protein,” says Rising. She is interested in using spider silk for medical needs. Her own work has involved making large batches of spidroins, enough to spin a fiber 125 kilometers (77.7 miles) long.

Li and Zhang imagine one day turning their silk into textiles or even artificial muscle fibers. For now, they plan to test other types of amyloid proteins in silk-making. Every new protein design could have useful properties. And, Li adds, “There are hundreds of amyloids we haven’t tried yet. So there’s room for innovations.”

This story is one in a series presenting news on technology and innovation, made possible with generous support from the Lemelson Foundation.

Sparks fly when you microwave grapes: here’s the science of why

A giant solar flare is inevitable, and humanity is completely unprepared

A giant solar flare is inevitable, and humanity is completely unprepared

For the past 150+ years, the big ones have all missed us. At some point, our good luck will run out.Continue reading on Starts With A Bang! »

For the past 150+ years, the big ones have all missed us. At some point, our good luck will run out.

This Is What The ‘Last Gasp’ Of A Dying Sun-Like Star Looks...

Some young adults will volunteer to get COVID-19 for science

What Makes A Planet? Lessons Learned 14 Years After Pluto’s...

Explainer: How our eyes make sense of light