The chitin in seafood wastes, insect “bones” and fungi is a chemist’s dream. Used in a new medical dressing, it beats regular gauze for wound healing. 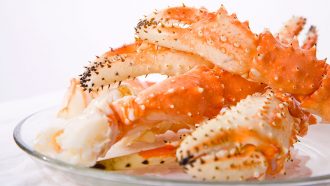 A new medical dressing helps skin wounds heal faster. Its innovative ingredient is the structural material in the skeletons, scales and shells of marine animals and insects.

Called chitin (KY-tin), this polymer is second only to plant cellulose as nature’s most abundant material. And as a natural waste produced by seafood-processors, it costs little.

Jinping Zhou is a chemist at Wuhan University in China. He was part of a team that created the new wound dressing. His group knew that chitin could help fight germs and had been shown to sometimes promote wound healing. These researchers wondered if making a gauze out of it would speed wound healing better than the traditional cellulose-based gauze does.

To test that, they made dressings out of different chitin-based fibers and tested them on rats. Then they monitored the wounds under the microscope. The best-performing chitin gauze sped the growth of new skin cells and blood vessels.

The treated wounds also developed stronger collagen fibers. Collagen, a protein, is the main building block in our bones, muscles, skin and other body parts. Here it helped strengthen and smooth the regrown skin. Since chitin excels at fighting germs, Zhou’s team suspects the new dressing also would cut the risk of infections.

The group described its new chitin-based gauze in the January 2021 issue of ACS Applied Bio Materials.

From shells to fibers

The backbone of chitin is a string of molecules made from glucose, a simple sugar. Each glucose in that string has been acetylated (Ah-SEE-tyl-ay-tud). That means each carries a group of atoms that include one oxygen, two carbons and three hydrogens (including a fourth hydrogen attached to a nitrogen.) Those acetyl groups make chitin water-repellent. Removing some of them makes chitin easier to work with.

For their new gauze, the researchers ground up the shells of crabs, shrimp and lobsters. Then they soaked the gritty bits in special solvents for 12 hours. Heating, bleaching and other processes turned the chitin-rich solution into moist fibers. Those chemical treatments could remove more than half of the acetyl groups. Zhou’s group then made fibers that contained different amounts of acetylated glucose.

A special machine spun those fibers into a fabric. Fattening the fabric between two hot steel sheets left it looking like the gauze people have long used as a wound dressing, or bandage. No weaving or stitching needed.

To test how much acetylation in the fiber’s chitin worked best, the researchers used 18 rats. Each animal had four round wounds that were 1 centimeter (0.4 inch) in diameter. Different chitin gauzes were applied to each. Another group of rats received a standard cellulose gauze. Yet one more received a slightly different type of gauze. Every three days, the researchers measured how much healing had occurred.

Dressings made from chitin with 71 percent of acetylated glucose worked best of all. That was especially easy to see on days three and six. The difference was smaller but still noticeable after 12 days.

The small wounds in these tests would have healed on their own. The new chitin dressings just sped the process. And that’s great, says biologist Mark Messerli. He works at South Dakota State University in Brookings. He’d like to see the chitin dressings tested on bigger sores, however, or ones that are harder to heal.

“Wounds in people with diabetes have serious trouble healing,” says Messerli. “That’s why it would be great to test the new dressing in diabetic mice.” Even in healthy older adults, some wounds can take more than a year to heal, he notes. A new dressing for repairing these sores “would be a big deal.”

Another advantage of the chitin gauze: The body can break it down. That is not true for standard cellulose gauze. Surgeons apply dressings inside the body to stop internal bleeding caused by serious injuries. Avoiding a second surgery later to remove the gauze would be really helpful, says Messerli.

Francisco Goycoolea is a chemist at the University of Leeds, in England. He likes the ease of choosing the amount of acetylation with the new process. That amount is “very important for chitin’s physical, chemical and biological properties,” he says. Like Messerli, he thinks improving the healing of difficult wounds would be a major advance.

In his lab, Goycoolea mostly works with chitosan, another form of chitin. (It has less acetylated glucose.) His team has been looking at its promise in farming as part of pesticides that are better for the environment. They also are investigating whether tiny capsules of the material can deliver treatments to diseased organs. Notes Goycoolea, “The range of chitin applications is truly huge.”

Was Life On Earth Brought Here From An Alien System?

How Scientists Use Hydrogen Gas, In Space And On Earth, To Measure The Big Bang

Why You Should Doubt ‘New Physics’ From The Latest Muon...

The First Clock In America Failed, And It Helped Revolutionize...

Are Humans Earth’s Best Chance To Become A Spacefaring...