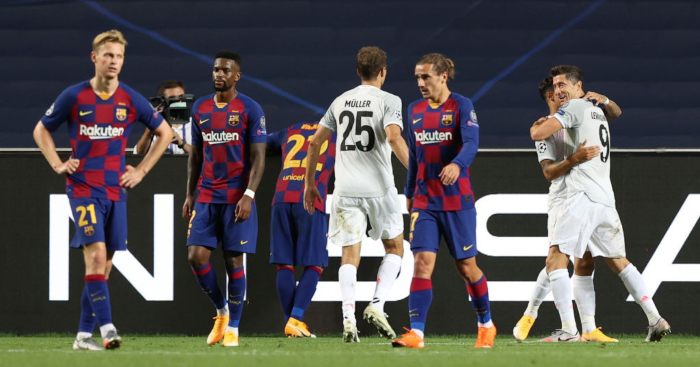 Send your thoughts on Barcelona, Bayern and anything else to theeditor@football365.com…

Davies + Kimmich > TAA + Robertson
Watching Alfonso Davies skin his man and roll across to Kimmich for a tap in, I reckon they have surpassed TAA and Robertson as the finest fullback pair in world football. What an amazing team to watch bayern are.
Barry, armagh

Time for someone to do a definitive world fullback XI. Any takers?
Edgar, LFC, Kampala

Bayern brilliance
When the article about Chelsea being was written, a lot of opposition fans were blaming the writer. I hope they all saw what happened to Barcelona. The question now is this: Can any English club face Bayern on current form?
Otubeezy

Well at least Chelsea only lost 7-1 on aggregate, Barcelona managed , truly embarrassing, the result and the performance, I think of Barcelona and I think of that dominant side under Pep Guardiola, but this season they have completely capitulated, serious questions and decisions must be asked and answered this summer.

Lots of “whoa what a game” mails I’m sure. All correct of course. Makes our 4-1 loss the other night look almost par for the course in terms of where we are at right now, but no one will say that out loud.

The first half ended bang on 45 mins. No injury time. Has that ever happened before? I honestly can’t remember it ever happening.

Im not one to discuss betting rings. But does anyone know what the odds were on that?
Ash, CFC

What a Bayern performance… Curious to see how everyone reacts to Barca conceding 8 goals in one match. Given the haranguing Chelsea received after we conceded 7 over two matches, I’m expecting it to be quite critical. Funny how Rio constantly mocked our defenders for a pathetic showing, but barely mentioned the barca defenders. Lampard was announced as sub par, mediocre and out of his league. Absol3ni way Setien survives this. One thing is for sure, Reece James clearly deserves more respect for the performance he put in.
Tashen, South Africa (barca should be thanking their luck stars that there isn’t a second leg)

That was not a twatting, I will be reporting my service provider for showing inappropriate content on live television.

​I would really 8-2 be a Barca fan right now…
Yaru, Malaysia

At least when Bayern best us 8-2 we had the decency to be humiliated over two legs….

Just like an old slasher movie!!! Barcelona kept trying to play out of defence. Like the girl who walks into the dimly lit barn. You scream at the tele: “Get away from the fucking barn Cindy!!!” But they just wouldn’t. The own goal gave a reprieve, as if the slasher guy dropped his knife or something. But you knew that Barca would keep giving the ball away. Pressing involves setting traps but the biggest trap of all is when the opposing team feels that if they stack their midfield, they’ll just pass through it. “Play the ball long for the love of God. Get away from the fucking barn Cindy.” Strangely Real, in less dramatic fashion, were undone against City by the exact same tactic. However, I also believe that if you sit off Bayern in their current form they will destroy you.

Pep has been rightly lauded as a great coach for all he achieved at Barca Bayern and City. However, the impending semi-final with Bayern will be his ultimate test.

Just keep out of the barn Pep.
Michael, Ireland

The demolition of Barcelona at Lisbon by Bayern Munich has given a reprieve to Lampard and Chelsea. Since the star studded Barcelona team with the greatest player on the planet with an 8 – 2 cricket score (not aggregate), while Chelsea with an inexperienced manager and kids lost with 7 – 1 aggregate score. Going by 5 goals in each half of the match last night, one can wrongly or rightly extrapolate that the score over two legs could have been 16 – 4. The effect of Corona virus has made us not to witness the highest two legged scoreline in history. Anyway, this is football and nobody could know what would have happened if it were two legged match. I know that my correlation sucks but not all correlations are perfect. Lampard and Chelsea kids should take solace and confidently prepare for next season.
VnProvidence Nsukka Nigeria, CFC

‘Is this the year that Barcelona get ripped to shreds in La Liga and The Champions League?
The average age of this current 2019/20 starting 11 is 28.7yrs, that’s including the youngster De Jong and Griezmann, who is no spring chicken anymore at 28yrs old.

They have an aging Piqué, Busquets, Rakitic & Suárez, all over 30yrs of age (Messi is 32, but I think we can all allow him some leyway for being the football Messiah).

Add to that Démbélé being injured, Malcom sold to Russia and Coutinho loaned to Champions League rivals Bayern, and this team have a serious lack of pace’

When the end comes it’ll be brutal and fast and it was. Barcelona have been guilty of some terrible man management (Coutinho), questionable recruitment and short sightedness with a lack of investment into La Masia, which surely would have been the ideal antidote to football post coronavirus. They had a natural successor in Neymar, and even balls’d that up!

New Champions League format…
Is anyone else really enjoying this one legged Knockout World Cup style format as much as me…..

Could the CL change going forward?

I hope so.
Paul, Manchester

CL, I’m a Celeb and the Daleks
I’m just going to just jump right on in and make a comparison between the CL, future success, and ‘I’m A Celeb Get Me Out of Here’.  It goes like this.

If you wish to continue being a top club and a world brand, then you need to continually refresh your squad.  Not your team.  Your squad.

If you don’t and, instead, you rely on a few key players, even though they may be some of the best the world has ever seen, to drag you out of the swamp then, inevitably, your team will be Barcelona on Friday the 14th August 2020.  That is, you get your arse handed to you because your team is too old.

So, back to Ant & Dec walking into ‘camp’ first thing in the Aussie morning:

Spoiler Alert!  Don’t read on or else!

The next ‘Celeb’ team to leave the jungle/top six is…….  Arsenal.

The Gunners appear to insist on spending frankly ridiculous amounts of money on ‘senior’ players who, whilst they undoubtedly have the experience, most certainly no longer have either the pace nor energy to compete at the highest levels and, most crucially, in every trophy competition domestically available.

Of course, the transfer window is very far from closed and you can see United paying through the nose (again) for a Marquee player more to make a commercial statement than a coherent plan to once again build a squad to dominate the EPL.  They won’t btw.  But, as I’ve written before, that is an issue to be placed at Mr Woodward’s door and no other.  None of us get to choose who either buys or ‘runs’ our clubs.

I wouldn’t want to face Bayern on that showing tonight.  They were utterly ruthless.
Mark (will be watching the Lyon game from the back of the couch like the scariest Dalek episode when I was a child).  MCFC.