“We’d been seeing each other on and off for about five years. It was his idea to destroy documents relating to $250 million in council grants". 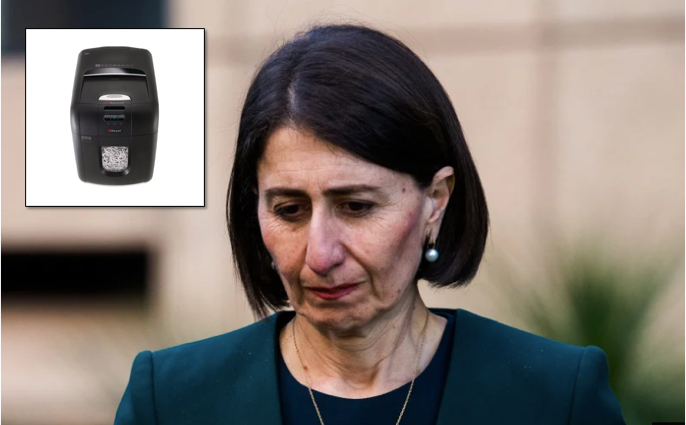 NSW Premier Gladys Berejiklian says she destroyed documents relating to the awarding of millions of dollars of council grants because she was coaxed into it by her former partner, a Rexel Auto+ 200X paper shredder.

The Premier said it was the shredder’s idea to destroy the documents relating to the $250 million grant program and that she never did anything wrong. “We’d been seeing each other on and off for about five years. And then one day a message came up on his little screen that said ‘do you want to shred these 850 pages?’ and I said to him, ‘I don’t need to know about that bit’ and then I pressed the button that said ‘Start’. So, as you can see, I acted appropriately at all times. There was really nothing that I could do. ”.

Berejiklian said the ‘very close personal relationship’ was a private matter and insisted the relationship was now over.

“Rexel Auto+ 200X wasn’t my boyfriend. He wasn’t anything of note. I certainly hoped it would be … but because I’m not the sort of person who’d been in a long-term relationship, I didn’t want to introduce Rex to my social circle. He wasn’t great in social situations.”

Colleagues rushed to the Premier’s defence, saying everyone knew what it was like to make a bad choice with office machinery. “She’s human like anyone else. The machinery she chooses to spend time with is a personal matter. I was once coaxed into running over 2,000 pages of legal evidence by a tractor – so I can relate to it. I think most people can,” one MP said.

The Daily Telegraph said it would hold the Premier to account with an 8-page souvenir lift-out showing Gladys’s softer side.

Sydney woman 'attacked driver who stopped to help, then stole her car'

Trump Refuses To Accept Outcome Of The Bachelor Finale

God Not Ready to Go Back to Work Yet

Report: Al Qaeda No Longer Hates America for its Freedom