The aftershocks of Trump's presidency, however, are likely to continue to disrupt Biden's administration for months to come. 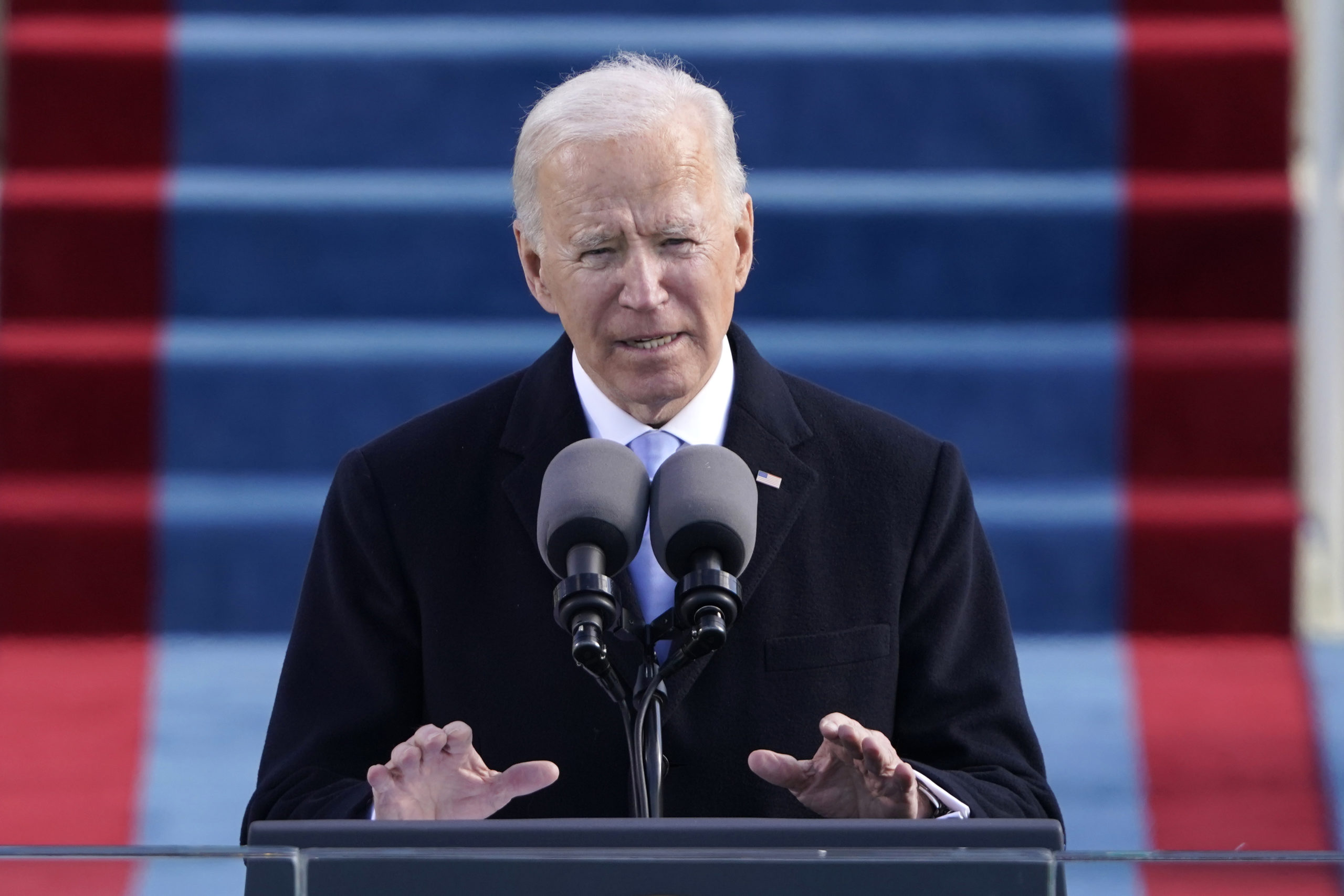 Joe Biden bounced down Pennsylvania Avenue on Wednesday afternoon, reveling in the opportunity to greet the small handful of supporters lining the street and joke with reporters while on-air.

But Biden’s first day as president was most remarkable for the abject lack of normalcy in a heavily guarded capital that featured far more armed troops than spectators. With the coronavirus pandemic at its worst point — the number of Americans killed by Covid-19 topped 400,000 on Tuesday — much of the pomp and circumstance of a typical inauguration was curtailed. And many on Biden’s staff continued to work from home rather than join the president in the West Wing.

The bizarre circumstances only further underscored the historic nature of the crises Biden has inherited from his predecessor, Donald Trump, who quietly departed the White House earlier in the day. The effects of the contentious transfer of power continued to reverberate Wednesday, and they are likely to shadow the new Biden administration for months to come.

Even Biden’s first act as president, signing more than a dozen executive orders, was a response to Trump — an effort to roll back some of the former president’s signature policies on immigration and climate change.

Much of Biden’s first week in office is likely to be consumed by executive actions, many of which have already been telegraphed by his chief of staff, Ron Klain, and grouped by the four priorities of Biden’s nascent administration: the coronavirus pandemic, the economic recession, racial inequities and climate change.

The second day of Biden’s presidency is expected to center on responding to the pandemic, especially setting in motion efforts to reach Biden’s ambitious goal of 100 million vaccines in 100 days. The new president has already outlined his first legislative priority, a $1.9 trillion COVID relief bill that includes funds for states to distribute the vaccine, extended unemployment insurance and stimulus checks.

But Biden officials have conceded that execution of their agenda is likely to be hobbled by the rocky transition, fueled by Trump’s refusal to acknowledge he lost the election. As the new officials started assuming their posts across the government on Wednesday, they were bracing to uncover chaos and problems concealed by Trump officials who refused to cooperate with the Biden team.

In particular, there are concerns throughout the national security apparatus, given the acrimonious transition process at the Department of Defense and the National Security Council.

At the Pentagon on Wednesday, outgoing Trump officials were, for the most part, nowhere to be found. The Trump White House liaison team had ordered the political appointees to vacate their offices by Tuesday, as Wednesday was considered a holiday, according to one former senior defense official who departed with the Trump administration.

At the last minute, the Biden team also denied Acting Defense Secretary Chris Miller office space and resources for his transition out of the role, a courtesy typically provided to the outgoing team. The transition elected not to extend Miller that particular “perk” given his acting role and the reduced capacity in the Pentagon due to the pandemic, said one transition official, noting that retired Gen. Lloyd Austin, the nominee to be Defense secretary, has also chosen to do all of his transition planning from home for those reasons.

One exception was Jonathan Hoffman, the outgoing chief Pentagon spokesperson, who met John Kirby, the new chief spokesperson, at the Pentagon on Wednesday morning to walk him in, Kirby told POLITICO.

“I found Jonathan Hoffman to be enormously helpful and cooperative in trying to ease my transition back to the Pentagon,” Kirby said.

Meanwhile, many members of the incoming defense team on Wednesday did not participate in the typical formal office visits with their predecessors to conduct the handover, said one former defense official who departed this week.

At other agencies, some Trump appointees refused Biden’s requests for their resignations, forcing the president to fire them in order to be able to install his own personnel.

Biden did swear in nearly 1,000 new members of the administration — virtually — from the White House State Dining Room, where he reiterated his commitment to decency, telling the appointees that “we have to restore the soul of this country, and I’m counting on all of you to be part of that.”

Though he did not mention Trump by name, Biden’s message to staff along with his early focus on issues of racism, economic inequality and climate change were clearly meant as a contrast to the turbulence of the Trump White House. Biden added his staff’s loyalties lay with the American people, not him — another contrast with Democrats’ frequent criticism that the former president valued personal loyalty above all else.

Many of Biden’s staffers have been forced to navigate the government bureaucracy and onboarding process Wednesday from their homes, thanks to the strict coronavirus guidelines the Biden White House is implementing.

In recent days, they received government computers and phones, devices that did not fully work until 12:01 p.m. Staffers were also adapting to the new rules that govern their communications, directing reporters who tried texting them to their new email addresses.

Even that represented a vastly different approach from Trump’s White House, which scorned many recommended coronavirus precautions and saw numerous Covid-19 outbreaks among staff and, ultimately, the infection of the president himself. Under the new administration, masks are required in the White House (Biden himself wore one as he signed executive orders in the Oval Office) and plastic dividers have been installed in offices.

The absence of staff on Wednesday left the West Wing largely empty as the new president arrived.

It was far from the moment that Biden would have expected when he set out on the quest for the presidency more than 30 years ago.

But White House Press Secretary Jen Psaki said in her maiden press briefing that Biden “had an incredible sense of calm, and a sense of some joy,” as he entered the Oval Office for the first time as president. “He also said he felt like he was coming home. Remember he spent eight years here as the vice president, playing an important role as a partner to President Obama. And that was the emotion that overtook him today.”

The momentous nature of the challenges Biden faces weren’t lost on longtime friends and supporters who attended his swearing-in ceremony at the Capitol.

“It’s especially symbolic because when he started this journey into politics, it was also a time of social unrest and upheaval,” said Rep. Lisa Blunt Rochester (D-Del.), a co-chair of Biden’s presidential campaign. “And we’re just proud.”

But Blunt Rochester, who attended the inauguration with her sister, who worked for Biden when he was in the Senate, expressed confidence that Biden was up to the task.

“I just feel like he can do this,” she said, starting to tear up. “He can help to heal this country, and even watching here, as we’re lined up to go in and get our security checks and everything, I’m just thinking about the agenda that we have before us, and how big it is.”

The nostalgia of Western moral outrage over Navalny arrest

WHO official: ‘I cannot imagine’ US pulling out of the...