Bielsa was impressed with … The post Bielsa praises Leeds display after away win at Sheff Utd appeared first on Football365. 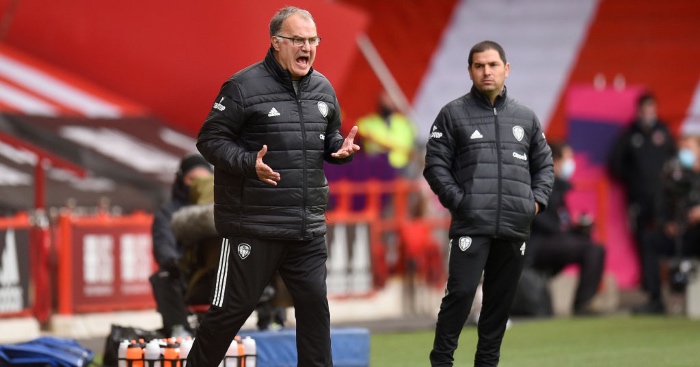 Leeds boss Marcelo Bielsa has praised his side’s second half performance after a hard-fought win over Sheff Utd.

The teams were even at half time after a close 45 minutes at Bramall Lane.

Blades midfielder John Lundstram had the best chance of the first half, with his close range effort saved by keeper Illan Meslier.

Leeds started the second half better and seemed more fluid in attack. Their attacking style of play paid off in the 88th-minute when English striker Patrick Bamford headed in Jack Harrison’s cross.

Leeds held off the Blades for the final few minutes of the match to continue their exciting start this season.

Speaking after the match, Bielsa told BT Sport (via BBC): “It was a just result. The first half was pretty even. We could have scored but also conceded. The second half was a lot better for us. I think we created a small but just difference to deserve the victory.

“We managed to attack better. We had close to six or seven opportunities. In that sense the offensive situation was better.”

New signing Rodrigo was brought off the bench in the second half, only to be substituted not long afterwards. When asked about this, Bielsa said: “A few minutes were left and I had to sub Bamford or him and Bamford is a very useful player at set-pieces against. He helps us defend them. It wasn’t a good decision as Bamford was tired. I should have kept Rodrigo on the field.

“When the game is finishing anything that happens is hard to modify. In general all managers are very anxious towards the end of a game.”

Leeds are now on six points after three Prem games and look to be adapting well in the top flight. Bamford is their record goalscorer with three goals this campaign.

The Whites face Man City next weekend at home.

The post Bielsa praises Leeds display after away win at Sheff Utd appeared first on Football365.