Brumbies reserve halfback Ryan Lonergan has launched a miracle 55m penalty kick in the 83rd minute to secure a stunning 27-24 Super Rugby AU win over Melbourne Rebels in Canberra. The teams appeared headed for golden-try time, locked at 24-all after 80 minutes, but the brave Brumbies ran the ball out of their own half […] 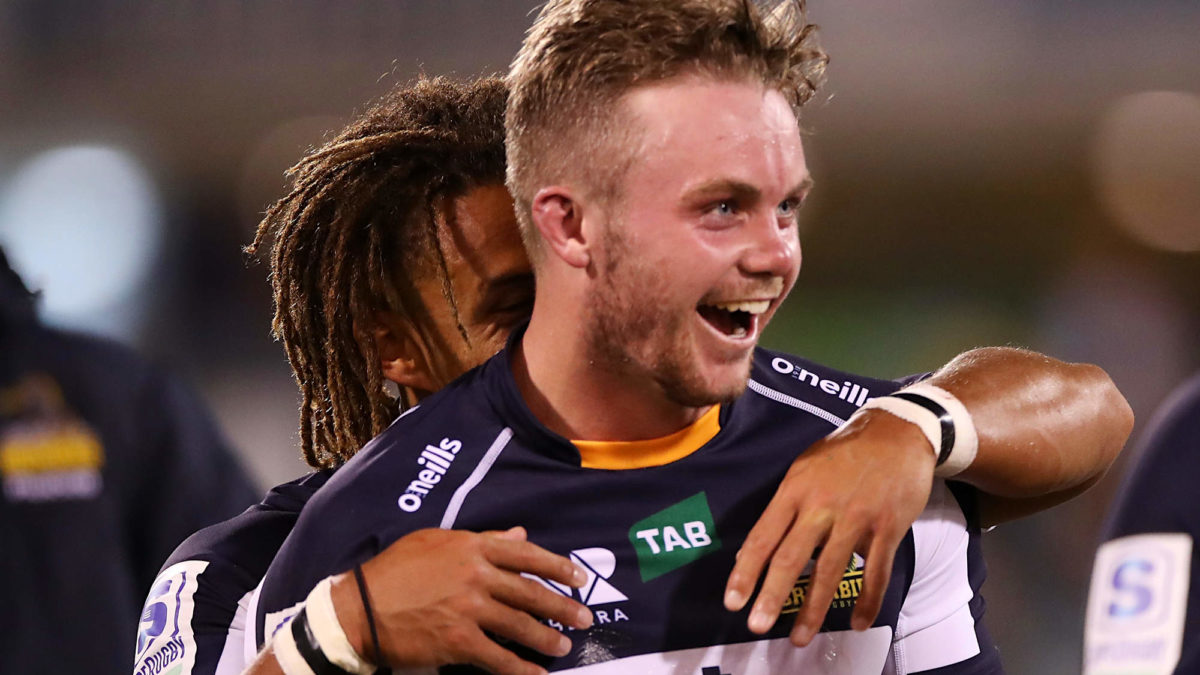 The teams appeared headed for golden-try time, locked at 24-all after 80 minutes, but the brave Brumbies ran the ball out of their own half and then secured a penalty at the breakdown.

Lonergan opted to take the unlikely kick in the swirling breeze at GIO Stadium but it went the distance before he was swamped by his cheering teammates.

Nic White, who Lonergan replaced, said his team used their “get out of jail card”.

“I’m not surprised with Loners (Lonergan) as he’s here training it all the time and it’s awesome to see him get one in a game and nudge it for us,” White told Stan.

“It must be said, this Rebels team put us under a lot of pressure, they really fought for everything.

“I’m proud of the boys being able to fight as a lot of teams under that sort of pressure don’t see that out and it lovely to see Loners finish it off for us.”

It was the second week of heartbreak for the Rebels, who missed their own opportunity to snatch a win with a penalty after the 80th minute against the Queensland Reds last week.

Lonergan proved a key replacement, setting up a late Brumbies’ try with a flick pass on to fullback Tom Banks.

It was a gritty performance by the home side, who also had to overcome the send-off of skipper Allan Alaalatoa and losing hooker Connal McInerney early with an ankle injury.

Alaalatoa was given a red card in the final minute of the first half for an alleged shoulder charge on Pone Fa’amausili, which ended the Rebels prop’s night.

A concussed Fa’amausili had to be assisted from the field and will likely miss their trip to Perth to play the Western Force next week.

Rebels skipper Matt To’omua put his team back in front through that penalty, taking a 12-10 lead to the sheds.

To’omua had a flawless night, booting a perfect eight penalties from eight attempts, while Rebels halfback Joe Powell had a big game against his former side.

Marika Koroibete was also a stand-out in the second half but couldn’t nail the try the Rebels desperately needed, while their forwards including lock Trevor Hosea and prop Cabous Eloff worked hard.

But it counted for little with the home side keeping their unbeaten record intact, having now won 18 from their last 19 home matches.

To’omua said he felt his team were in control in the closing stages.

“We were a victim of our own ill-discipline; just a few silly moments of uncharacteristic errors and a bit of inexperience,” To’omua said.

“We can learn from it and you can tell we are not far away.

“It’s a tough gig to come down here and beat the Brumbies and we almost did it.”

How Dave Rennie’s Wallabies moved on from Cheika-ball at...

Why is there such variability in the All Blacks’ forward...