Build it and they will come: The Andy Marinos view for Australian rugby

The first weekend of Super Rugby AU is already behind us, and we’re now well and truly into the swing of the season, with every match over the remaining nine rounds likely to have some impact on the final standings. There’s been a definite change in mood around the game in Australia this season. There […] 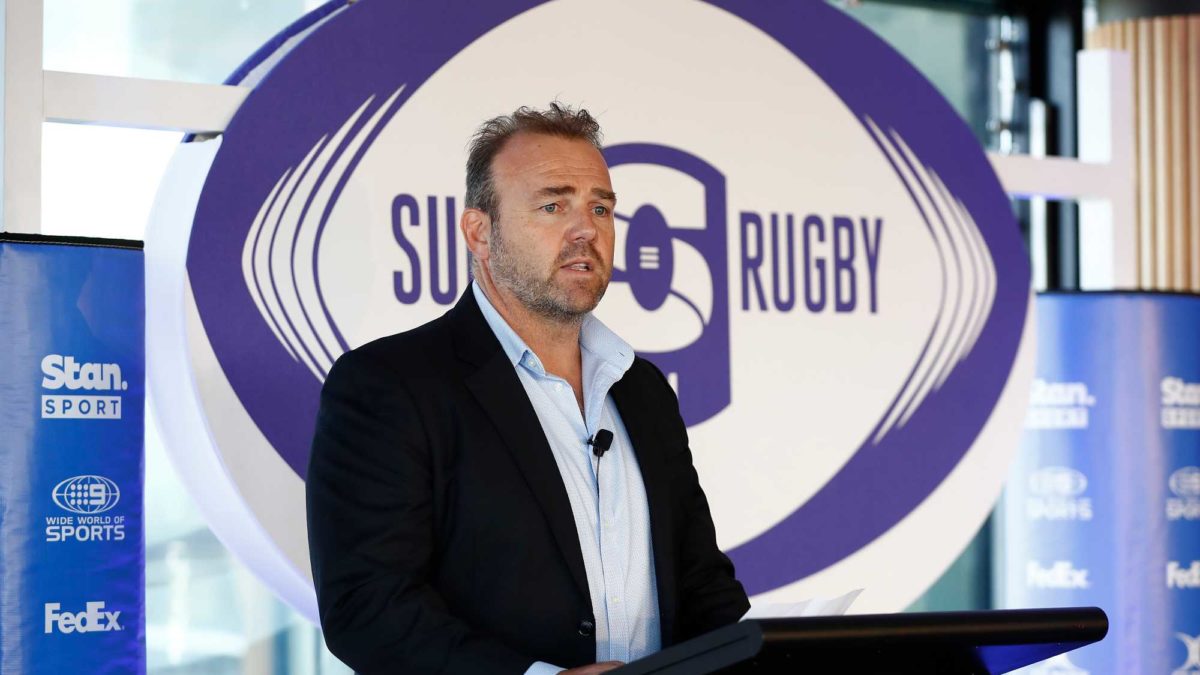 The first weekend of Super Rugby AU is already behind us, and we’re now well and truly into the swing of the season, with every match over the remaining nine rounds likely to have some impact on the final standings.

There’s been a definite change in mood around the game in Australia this season. There is no doubt that is all down to the game being more visible than it was – three times the viewing audience on opening night is already proof of that.

2020 shook up both rugby in Australia and Rugby Australia like the game has never experienced before. The impacts and ongoing effects are likely to be felt for a few more years to come, but somehow the game got itself into a position where the future looks a whole lot brighter.

A lot of that comes down to RA Chairman Hamish McClennan and especially now-former CEO Rob Clarke, who signed on in an interim role for three months and is only now readying himself to ride off into the sunset, nearly a year later.

In his place comes former SANZAAR boss Andy Marinos, and I was lucky enough to be part of a meet-and-greet with the new CEO in Canberra last week.

We worked out that we may have spoken on the phone once a few years ago, though it obviously wasn’t so memorable for either of us that it lingered in our memories. “I was the faceless man, according to you scribes,” he joked. 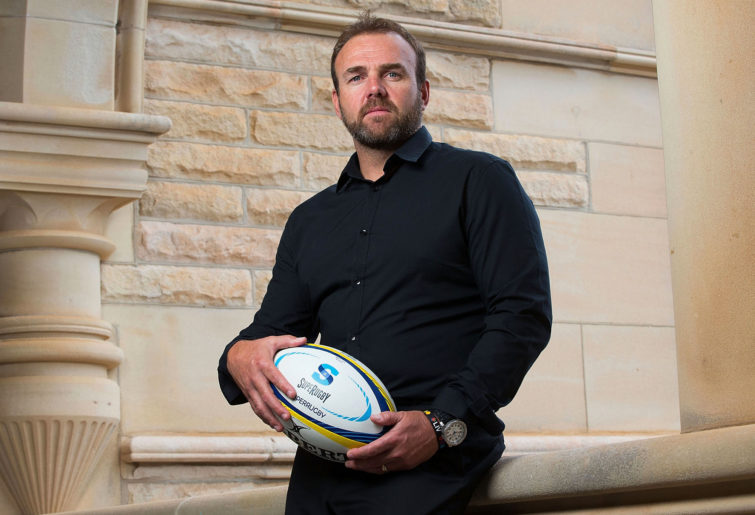 But after a forty-minute roundtable chat and a quick one-on-one outside as he headed off to his next appointment, I found Marinos an engaging communicator, who happily answered everything the local media guys threw at him, and someone who genuinely wants rugby in Australia to flourish.

He’ll be judged over time on his performance as Rugby Australia CEO, but as a first impression, I left thinking the game is in decent hands with Marinos continuing to work hand-in-hand with McClennan, and following on from the impressive rescue job Clarke pulled off when the game most needed it.

These were his thoughts during our one-on-one chat to wrap up the meeting.

On his excitement for 2021, and whether he’s noticed the same feel-good upswell around the game now:

“I am, I’m really excited. We’ve had a really positive start to it with our new broadcaster coming on board, they’ve really put a lot of emphasis and exposure and marketing and promotion around it, which is really good because I think that’s where rugby needs to be.

“And certainly, talking to all the franchises that are going to be playing, you know, the guys are certainly motivated, the players have been able to have good pre-seasons – it’s a bit disappointing we’ve had a couple of big injuries on key players, but that’s part of the game.

“But generally, there’s a sense of optimism. And that’s just really building on what was a very much improved Tri-Nations from the Wallabies last year, and it’s just important that we keep that momentum going.”

On what he’s most looking forward to from the second season of Super Rugby AU:

“Oh, I’m just really looking forward to seeing a really tight, competitive contest, you know. From a marketing and promoting the game point of view, we want to see that unpredictability of outcome, but we want to see good rugby with a lot of ball in play and tries being scored.

“I mean, that’s the romantic side of it, but if we can have good contests and as I said, that unpredictability of outcome, and games that really go down to the wire, then I think that’s what everyone wants.”

The clean slate the AU competition provides in trying to make the local product the best it can be:

“We can, and I think that’s one of the biggest benefits of having a localised competition structure. Working in the previous construct of SANZAAR, you always had to get the four unions’ consensus in terms of any variations or adaptations that you wanted to make around the game.

“Whereas I know the coaches and the high-performance people have been working really closely about what things we can do to improve the product here, because more importantly, we want to make sure it’s something that is easy to understand from a spectator’s point of view.

“That gives us a lot of opportunity, and you see with some of the variations we’ve pushed through already, we’re not going to waste those opportunities.”

What have you learned about Australian rugby that you didn’t fully understand when you were heading up SANZAAR?

“I think it’s more on the women’s side, on the community side, and just the very strong, passionate thread that runs through the country and all those connected to the game around it. That’s been hugely encouraging.

“And then from a community perspective, I have an involvement back in Sydney with my local club, so I have an understanding of it, and having played and moved on, there’s always that adage in rugby that you never forget where you’ve come from, and you’ve got to go back to the grassroots.

“Just in the brief engagements I’ve had with some of the clubs and people contacting me, there’s a genuine enthusiasm about a revitalisation of the game, and building it from the grassroots up, and I think that’s exciting for us. It’s going to take time, it’s going to take effort; it’s not a quick fix, but I get a sense there’s a collective will there that rugby in Australia, as a whole, we can all start moving together in the right direction.”

Are there quick wins that you can have to regenerate the community game, the country game, even schools?

“I don’t think there are quick fixes, but I think we’ve got a huge advantage with our broadcast platforms, so that’s going to extend our reach and accessibility of the product. The next part, and it’s not necessarily about money, is getting foot soldiers out into the community.

“We can use our players and our talent, there’s great infrastructure like the Classic Wallabies, and there’s a significant amount of really, really good volunteers and people that are able to give up their time week in, week out to further promote the game.

“I think the responsibility for us as Rugby Australia, and the professional side of the game is to continue to push a positive promotion of the game.

“Build heroes and make the game attractive, and then at every opportunity that we do get to make sure that we are dipping back down into the community game and showing our support. And that’s whether you’re going to go and watch a game, or whether there’s an opportunity from a playing perspective to lace up your boots and run out for your local club.

Australia and New Zealand are trying to work together – but is there a will to work on a permanent trans-Tasman solution?

“Oh absolutely. We can’t underestimate the stress that the COVID pandemic set upon everybody last year, and everyone was just scrambling to keep their organisations alive.

“Yes, there has been tension between the two, but I think that’s healthy. If you’re all holding hands and running down the road together all the time, that’s not going to be healthy for the long-term success. Ultimately, certainly I know speaking to my counterparts in New Zealand, we all understand that we’ve got to work together for the greater good of the game in the region.

“But at the same time, I think it’s been good. Australian rugby stood up for what they believed was right for Australian rugby, and we’re going to continue to do that, because we’ve got to be proud of who we are, what our heritage is, and make sure that at all times it also does work for us.

“I think if we respect each other in that space, I think we can move forward together.”

Are we nearing the point where SANZAAR look after the internationals and Super Rugby is run independently?

“Keeping the alliance from an international perspective is critically important.

“Only over time are we going to understand the high-performance impact of us not playing against Australia, South Africa, New Zealand and Argentina on a regular basis, because I think that’s been the Achilles heel of our dominance on the international stage for so long.

“In terms of the relevance of SANZAAR in the domestic markets, I think we’ve also got to be realistic and understand that as much as Australia and New Zealand may want to work together, when it comes down to intricacies, or a decision that might impact the performance or outcome of any particular team on a weekend, be it from an officiating or judicial, or even just competition structure perspective, I think it’s always wise to have an independent party that’s sitting in the middle of that, so that you’re not damaging the relationship even further, and certainly, if you ever get to a position of an impasse, you always know you’re going to vote for the best interests of your union.

“From an independence point of view, I still think they’ll have a role to play, and we don’t necessarily have to worry too much about the running and the machinations around the competition, and rather just focus on the high performance and making sure we are getting the results.”

Brett McKay is back writing for The Roar, and is also writing weekly rugby columns for ABC Sport.

The GOAT: Who really is the greatest athlete of our generation?

The Wrap: Injuries and depth to determine Super Rugby AU

Michael Hooper shines in sky blue slaughter at the SCG

The shifting geopolitics of rugby