Scientists had not considered fat a 'taste.' The brain begs to differ, new data show. 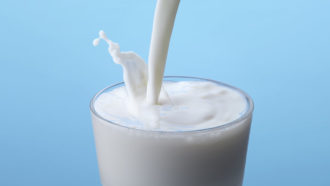 Most foods we eat are an explosion of flavor. But the tongue itself only detects a few major tastes — sweet, salt, sour, bitter and umami (that’s savory). Notice anything missing? Where is the taste for fat? It’s much of what makes butter, cream and bacon so delicious. A new study now confirms that yes, the brain knows when fat enters the mouth.

Explainer: Taste and flavor are not the same

Taste buds sit on the tongue. So researchers dripped different concentrations of fat right onto people’s tongue. The brain at once sparked with activity. And it happened as quickly as the brain registers other tastes, such as sweet and salty. This could mean that fat itself is truly one of the basic tastes, joining the ranks of sweet and sour.

To be an official basic taste, this sense should fulfill certain criteria. For instance, the tongue should have a receptor for it — a specific molecule that serves as a docking station for qualifying molecules. There also should be specific distinctions, different types of fat that we can taste.

Scientists knew we have receptors on the tongue for fatty acids. Those are the long chemical chains that make up fats. They also knew people and other animals can distinguish different types of fat by taste. What had not been clear was whether the tongue would send the brain a distinct signal when it encountered fat.

Why fat’s ‘taste’ is so hard to pin down

Fat is challenging in part because taste is the toughest sense to study, says Maria Veldhuizen. She studies the brain’s response to flavor and food at Mersin University in Turkey. She was not part of the study. When food enters the mouth, she says, “There are so many things going on it’s hard to isolate the taste” alone.

For example, we don’t experience most foods as a simple taste. Smells contribute to their flavor. So does the way they feel in your mouth. For some tastes, such as salt, scientists can isolate the taste alone, dropping salty water right into the mouth. But fat poses an extra challenge. “Not only is this the most difficult sense, it’s the most difficult taste quality in the senses,” Veldhuizen says.

Take butter, for example. It’s got lots of fat. But it doesn’t just have the taste of fat. It turns on the salt and sweet receptors. It has a distinct smell, too. It also has texture; it feels smooth and silky. Taking all those other senses out of the picture to find out if people can taste fat alone is hard.

Camilla Arndal Andersen was up to trying. As a neuroscientist, she studies the brain. She worked on the new study while at Aarhus University in Denmark. (She has since taken her food science skills to DuPont Nutrition & Health, a company in nearby Copenhagen.)

For the study, Andersen recruited 24 adults. Then she dripped tiny amounts of milk onto their tongues. Some of the milk had only 0.1 percent fat. This is what we call skim milk. The whole milk she used had 4 percent fat. Her thick cream contained almost 40 percent fat.

Of course, these milk samples might feel different in the mouth. So Andersen asked everyone to stick out their tongues before she dripped the liquids. Because the skim and whole milk were runnier than cream, she added a tasteless additive. It made the milk as thick as the cream. She also made sure the tasters weren’t rubbing the mixture around in their mouths to where they might feel a difference. So she pumped the samples onto the tongue and allowed it to roll right off.

A clip pinched shut the nose (no smelling allowed), and the recruits were asked not to blink. They also couldn’t take a breath. (You can’t stick your out tongue and breathe through your mouth at the same time. Try it.)

It was a strange experiment to be part of, Andersen says. And she should know. She did it herself. “It’s weird,” she admits, but “it doesn’t hurt.” In fact, she recalls, “It’s a bit boring, because you’re there for quite a while.”

Getting feedback from the brain

The reason her volunteers had to hold so still was because they were also wearing a cap to record electrical activity in their brains. Every brain signal uses a tiny current of electricity. Scientists can measure those signals using EEG. That’s short for electroencephalography (Ee-LEK-troh-en-sehff-uh-LAHG-rah-fee). In this case, Andersen could use the EEG cap to see if there was a signaling difference when people tasted skim milk, whole milk or cream.

Sure enough, the EEGs picked up a signal when the participants tasted cream, one that was much smaller for whole milk, and missing for skim milk. The signal appeared around 100 milliseconds (one-tenth of a second) after the cream dripped onto their tongues. Andersen and her colleagues published their findings March 14 in the journal Chemical Senses.

“I’m really impressed with the work they did,” Veldhuizen says. “This is a really good example paper of showing what science is like. You manipulate something [fat], but there are all these other variables and many ways you can control [for] them.”

The new study shows that the brain knows when the tongue touches fat. But Andersen says she doesn’t want to say she has total proof. “Fat might be a taste,” she says. But with using these data alone, “It’s not proof,” she says. “It’s just yet another observation.”

Explainer: What are Antibodies?

Ask Ethan: How Do We Know How Old The Universe Is?

Earth as you’ve never seen it before

Dark Matter In Our Own Backyard Revealed By Nature’s Perfect...

The Standard Model Is Not Enough, New LHC Study Shows