A Breakfast Casserole – in cake form! All the morning essentials present – bacon, eggs, milk, bread and cheese – it’s a breakfast strata that tastes like a cross between quiche, omelette and a breakfast casserole with cheesy custardy insides, and a golden crusty surface. Make it now or leave it overnight, then just pop... Get the Recipe The post Cheese & bacon strata cake – breakfast casserole! appeared first on RecipeTin Eats. 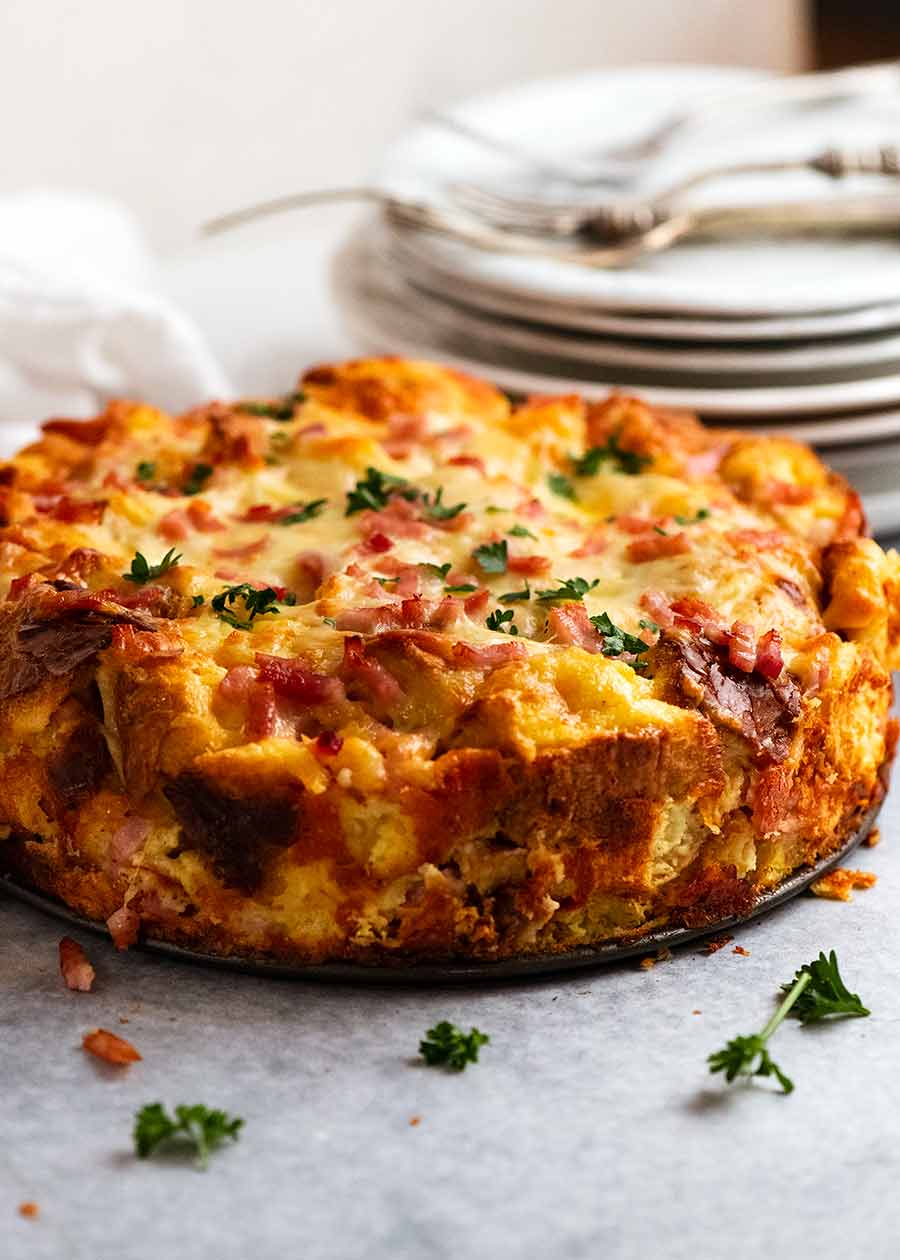 A Breakfast Casserole – in cake form! All the morning essentials present – bacon, eggs, milk, bread and cheese – it’s a breakfast strata that tastes like a cross between quiche, omelette and a breakfast casserole with cheesy custardy insides, and a golden crusty surface.

Make it now or leave it overnight, then just pop it in the oven the next day!

Being completely upfront – this is not a real dish as such, it’s just something I made up on a whim back when I first published it over 5 years ago as a way to make breakfast for a group without frying up individual bacon and eggs for everyone.

It’s essentially a breakfast casserole or a savoury bread and butter pudding, made with bread soaked in eggs and milk, scattered with cheese and bacon, then baked until golden on the surface, custardy and cheesy on the inside.

And rather than baking it the traditional way in a casserole dish, I’ve used a cake pan – so you also get golden sides and the fun factor of being able to serve slices of it like cake!

Something different – but you know it’s going to be tasty – right?! I like the way you sort of get “swirls” throughout the “cake”, which are really just the crust of the baguette I chopped up to make this breakfast “cake”!

What you need for this breakfast cake

Here’s all you need to make this breakfast strata – bread, eggs, bacon, cheese and milk. All the breakfast essentials!

Absolutely any bread is fine – I like long breadsticks because you get more “swirls” on the inside because there’s a higher crust to crumb ratio – and you can easily switch bacon for ham.

Also – bonus if it’s stale bread because it holds it’s form better once soaked in the egg mixture, but fresh works just fine too. The bread used in the recipe video and photos is fresh.

How to make this Breakfast Strata

So easy you can do it even when you’re still half asleep – though to make your mornings even more relaxing, mix it up the night before then just pop it in the oven the next morning!

The smell when this is baking is mouthwatering! It smells like a Quiche Lorraine, and though admittedly it looks a lot more rustic than a quiche, it is a whole lot less effort to put together!!

To serve, slice it up just like cake then be the civilised sort and eat it with a fork, though it holds together well enough to just eat it with your hands. Excellent food for on the go! – Nagi x 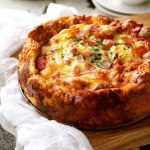 1. Bread – any plain bread will work here, white or wholemeal, loaves, French sticks/baguettes (which is what I used), hamburger buns, rolls. I personally prefer plain rather than with seeds or other bits in it just to have a smooth custardy centre. Also best to avoid artisan breads like sourdough with really thick chewy crusts which are a bit too thick for the custardy inside of this dish. Measuring – bit tricky because different bread have different weights. I used a standard baguette – about 270g / 9 oz. Best to go by volume: 7 packed cups = push the bread cubes in a 1 cup measure, press down to level the surface. 2. Cheese – You can use any melting cheese eg. tasty, gouda, Monterey Jack, pepper jack but best to avoid mozzarella because it doesn’t add as much flavour (if you do use it, add another 1/4 tsp salt). 3. Cake pan – If you don’t want to make this in a springform pan, use a cake pan without a loose base (it holds together well enough to turn out) or a 10″/25cm square baking dish . Also, you can mix the bread and egg mixture straight into the baking dish instead of in a ziplock bag. The ziplock bag is used to prevent egg mixture from leaking from the springform pan while it is set aside. 4. Nutrition assuming 8 servings, including an estimation of bacon fat discarded.

The clatter of spaghetti dropping on the floor and he was in the kitchen in a flash…..

Well, I WAS going to give them a wash and use them anyway, but he got to them first!!!