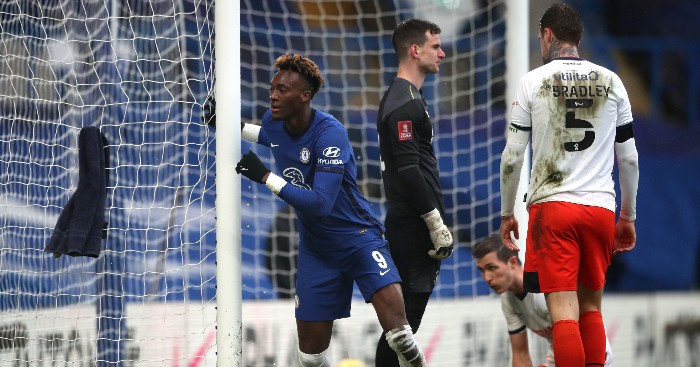 Tammy Abraham netted a hat-trick as Chelsea got the better of Luton Town in the FA Cup fourth round.

England hitman Abraham took his Chelsea goal tally to 11 for the season, netting twice in seven first-half minutes before completing his treble late on.

Full time!
We progress to the next round of the #FACUP

Jordan Clark profited from the struggling Kepa Arrizabalaga’s latest error to claw one back for Championship side Luton, but the Blues ground their way to an important fourth-round win.

Timo Werner missed a late penalty in a frustrating end to his afternoon, but Chelsea will now travel to Barnsley in the fifth round.

This victory was crucial for under-pressure boss Frank Lampard, who will now set about trying to engineer a return to winning ways in the Premier League.

England midfielder Mount captained Chelsea for the first time, a fine reward for the 22-year-old’s relentless graft and quality.

A fine boost for Chelsea’s much-vaunted academy, Mount delivered precisely the exemplary leadership Lampard both required and so craved.

The 13-cap midfielder took to a deep-lying role in Lampard’s latest formation – and his partnership with Gilmour merits exploration in the Premier League.

Chelsea desperately need wins in home matches against Wolves and Burnley next week after five losses in eight league encounters.

And Lampard could do far worse than pair up young Scot Gilmour with his Mr Dependable Mount in the coming weeks.

Lampard finally fielded two strikers, with Abraham and Werner linking up at the top of the field.

Christian Pulisic and Hakim Ziyech took to the flanks then, with Mount and Gilmour the sitting central midfielders.

That is precisely what Lampard wants, because if a potent formation is difficult to pin down, so are the chief protagonists within it for opponents.

Werner and Abraham started the day’s strike partnership by making the exact same run, and botching a promising move.

Fortunately for the hosts calibration came quickly, with Werner feeding Abraham – albeit via a deflection – to slot the opener.

Just when Chelsea should have set themselves up for a cakewalk though, up cropped the twitchy, hesitant defending that has besieged their recent form.

Kurt Zouma had hobbled through a calf problem, and paid the price by not getting tight enough to Clark in the box.

The 27-year-old Hatters wing strode on and slipped the ball goalwards – but not forcefully enough to guarantee a goal.

His slightly scuffed effort should have elicited a regulation save, but beleaguered stopper Kepa’s Chelsea troubles continued unabated.

The Spain keeper reached the low strike with both foot and hand, and yet still somehow managed not to keep the ball out of the net.

Chelsea dipped off the pace at the end of the first-half, but recovered some shape and energy after the interval.

Abraham could have completed his hat-trick had he reached a drilled ball that flashed across the face of goal.

Luton then squandered a gilt-edged chance to level however, with Harry Cornick striking at Kepa’s near post and allowing the Blues stopper to beat away his effort.

Had Cornick angled the ball across goal, Kepa could have found himself in trouble again.

Replacement Callum Hudson-Odoi dinked in a fine cross to hand Abraham his hat-trick goal on a plate, but again the England man could not find the target.

From Hudson-Odoi’s next inch-perfect cross Abraham made no mistake, tucking home to claim the match ball.

Gilmour’s fine reverse ball in exchanging passes with Hudson-Odoi carved out room for the cross, and this time the ball found the net.

Werner was hacked down when through on goal at the death, only to step up and see his spot-kick palmed away by Simon Sluga.