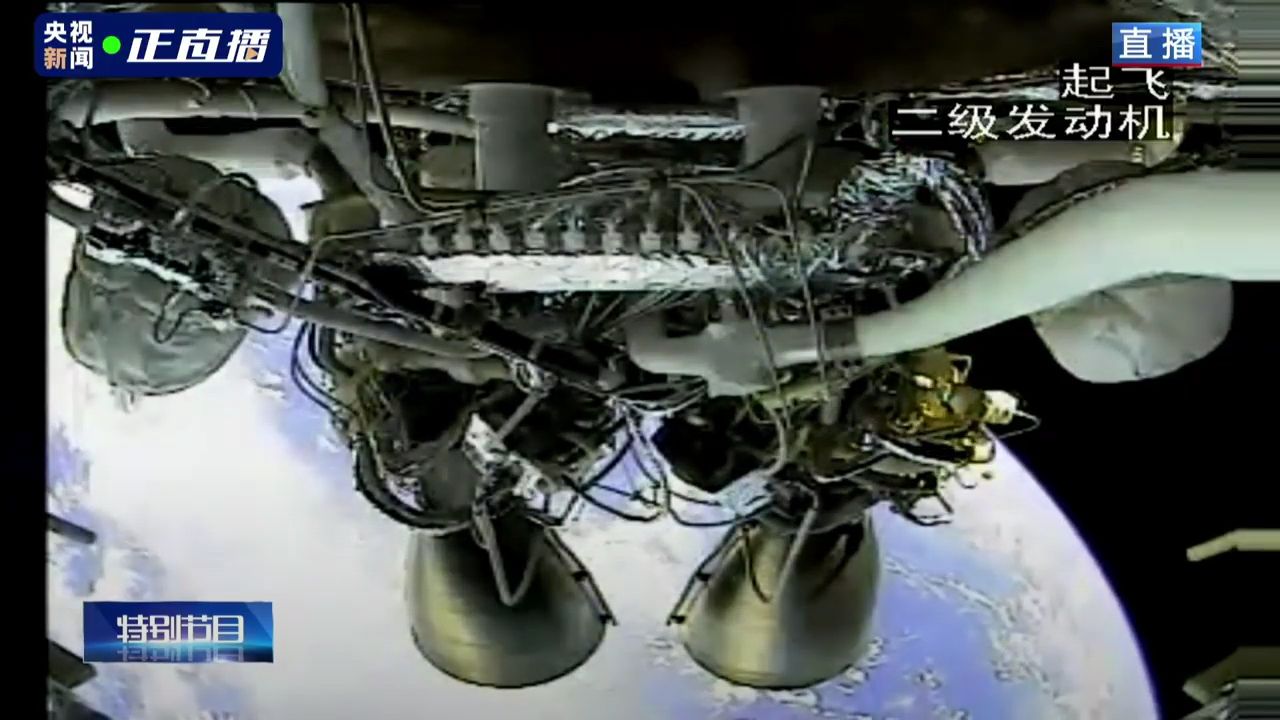 The Chang’e 5 lunar orbiter, lander, and sample collection return vehicle left its sea-side launch pad at the Wenchang Spacecraft Launch Center in Wenchang, Hainan province, People’s Republic of China to begin its journey to the moon right on time at 20:30:12 UTC (15:30:12 EST) on 23 November.

The mission launched on a Chang Zheng 5 heavy lift vehicle at the opening of a 50 minute launch window.  The launch successfully sent its lunar payload on a 6 day journey to our closest celestial neighbor.

The Chang’e 5 mission, named after the Chinese goddess of the Moon, is the People’s Republic of China’s first-ever sample return mission and the first to be attempted by any agency or company globally since the 1976 Luna 24 flight by the Soviet Union.

If successful, Chang’e 5 would make China the third country to return lunar samples to Earth after the United States and the Soviet Union.

The launch vehicle tasked with beginning Chang’e 5’s journey to Earth’s natural satellite was the Chang Zheng 5. It is the most powerful Chinese rocket in operation and the third most powerful launcher in the world after the Falcon Heavy and Delta IV Heavy vehicles. 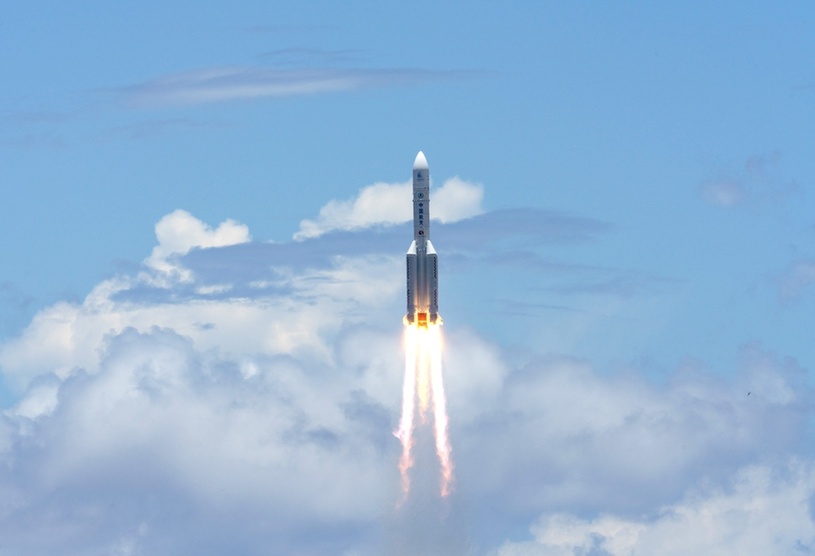 The boosters separated less than three minutes after liftoff, while the first stage continued to burn for upwards of eight minutes.

The liquid hydrogen and liquid oxygen second stage took over, powered by a pair of YF-75D engines. This stage was responsible for carrying the Chang’e 5 spacecraft to its initial parking orbit.

That parking orbit, based on mission specific information released by China and navigational warnings issued by the People’s Republic of China, was inclined 23.5 degrees to the equator.

The ground track of the launch carried the rocket over The Philippines — with side booster and payload fairing drops zones flanking the large, northern island of Luzon.

However, the core stage has a drop zone that encompasses several populated islands of the Federated States of Micronesia.

This follows a pattern of China’s continued launch over populated areas (though in this case, the nation is launching mainly over water) and several recently high-profile incidents of highly toxic and uncontrolled rocket stages crashing into villages and barely missing heavily traffic bridges.

The trajectory of this mission meant that a failure after booster separation but before payload fairing separation would result in debris coming down over The Philippines.  Thankfully, that did not happen.

Looks like Chang'e 5, the Chinese Lunar Sample Return Mission to be launched on November 23rd, will go into an initial parking orbit with ~23.5 degrees orbital inclination, before being boosted towards the Moon.: pic.twitter.com/7TYlma8RbW

After reaching its initial parking orbit, the second stage and payload performed a coast maneuver before the stage re-iginited its engines for the Trans-Lunar Injection (TLI) burn to send the mission on its way to the Moon.

The coast phase between TLI and Lunar Orbit Insertion (LOI) will last 112 hours, with the Chang’e 5 spacecraft arriving in Lunar Orbit on 28 November. Meanwhile, on 27 November, the Sun will rise over Mons Rümker — the 70 kilometer diameter, 1.1 kilometer high lava mound on the Moon’s near side that has been selected as the mission’s landing site.

Mons Rümker, located in the Oceanus Procellarum (“Ocean of Storms”), has had volcanic activity much more recently than other areas of the Moon, meaning samples collected there may include some of the youngest lunar material yet collected for study. Examining this material will not only improve the understanding of the Moon’s geology, but also those of other planetary bodies as well.

The landing site also has a high concentration of radiogenic heat-producing elements, such as Thorium, Uranium, and Potassium. The combination of these factors made the site an attractive scientific point of interest.

Four robotic missions (Luna 9, Luna 13, Surveyor 1, and Surveyor 3) have explored parts of the Oceanus Procellarum, as did the human Apollo 12 mission.  Chang’e 5 is the first mission, however, to Mons Rümker.

Once in lunar orbit, the Chang’e 5 spacecraft will separate into two vehicles: an orbiter (retaining the Earth return capsule) and a lander equipped with an ascent vehicle.

Landing at Mons Rümker is expected at approximately 20:30 UTC (15:30 EST) on 29 November. If successful, it would be China’s third soft landing on the surface of the Moon. 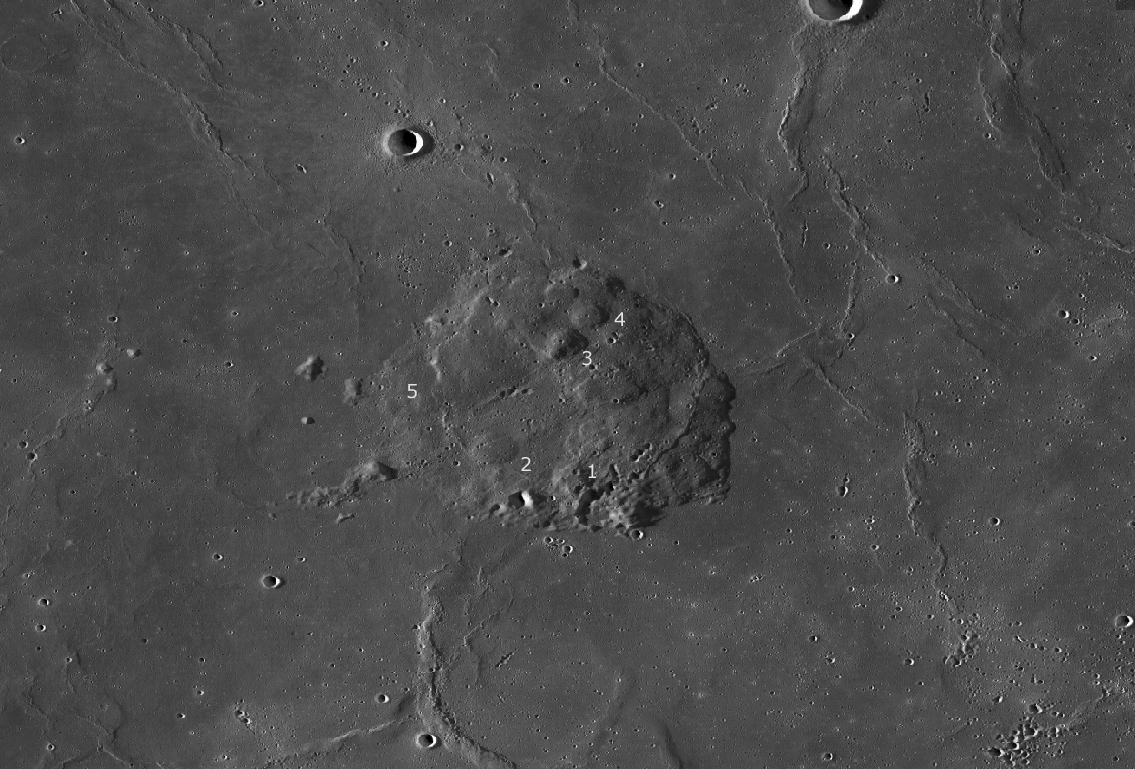 The lander, which does not include a rover but rather remains stationary on the lunar surface, will collect up to 2 kilograms of samples from depths of up to 2 meters. It is equipped with a drill and a scoop for collecting the samples, aided by a Lunar Mineralogical Spectrometer and a Lunar Regolith Penetrating Radar.

Also on board the lander is a panoramic camera, which will be used for photography of the lunar surface. The Chang’e 5 lander relies on solar power for its mission, driving the requirement to land at Mons Rümker shortly after sunrise.

The return capsule will separate from the orbiter for reentry and landing on 15 December. The capsule will land under parachute in Siziwang Banner, Inner Mongolia, People’s Republic of China. The sealed samples will then be collected and transported for study and analysis.

The European Space Agency is an active partner in the Chang’e 5 mission, assisting in tracking the spacecraft during two crucial phases of flight. 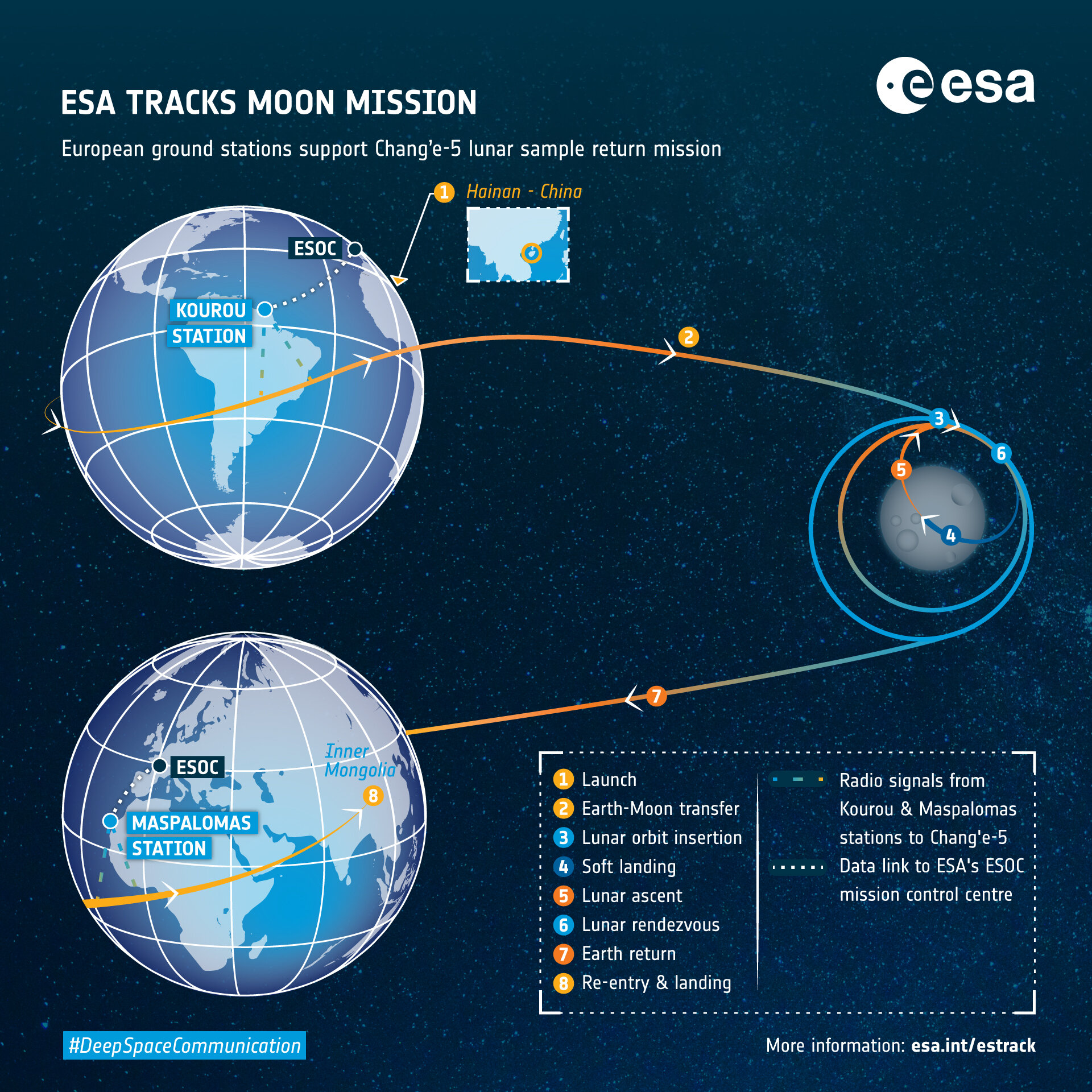 Shortly after launch, an ESA ground station in Kourou, French Guiana — home to the European launch provider Arianespace — established a communications link and verified the health of the spacecraft.

Near the conclusion of the mission, a ground station in Maspalomas, Spain, will track the spacecraft during its return to Earth. Other ESA ground stations will be on standby as backups to Chinese tracking stations throughout the mission.

The launch of Chang’e 5 will likely preface the use of the Chang Zheng 5 rocket to construct a new Chinese space station in low Earth orbit beginning in 2021. With regards to the Chinese National Space Administration’s lunar exploration program, the Chang’e 6 mission is being developed as a backup to Chang’e 5 should any issues prevent a successful mission.

However, a successful Chang’e 5 mission would pave the way for Chang’e 6 to complete another sample return mission from a different location on the lunar surface.

Subsequent Chinese exploration plans include crewed missions to the lunar surface, a goal shared with NASA and other international space agencies.

Get Ready To Launch America!

Rust on the Moon. How is that possible without oxygen and...