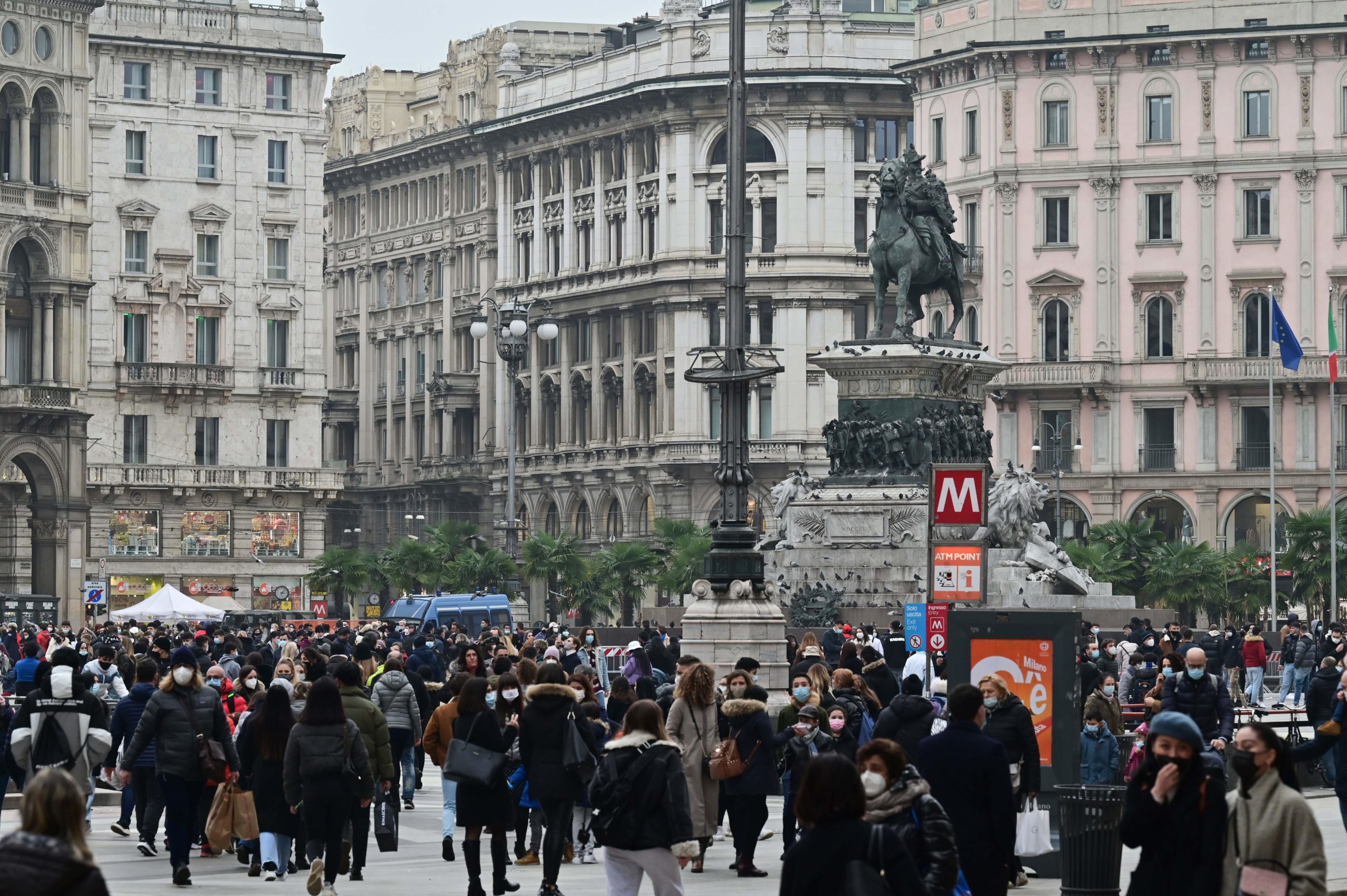 When Milan first went into lockdown one year ago, fear and anxiety swept over the city as coronavirus cases spiked across northern Italy. But residents of the notoriously polluted metropolis noticed one positive side effect.

“We had the air quality of a countryside resort, light air and blue skies, good visibility, and a lot less noise; it was absolutely wonderful,” said Anna Gerometta, a lawyer and president of the advocacy group Cittadini per l’Aria (Citizens for Air).

It didn’t last, of course — and worse, local authorities have backtracked on existing air quality measures.

Gerometta’s organization had previously successfully fought to institute low-emission zones in Milan that restricted the most polluting vehicles from the city center. But under lockdown, the city government suspended enforcement of these zones while also lifting parking fees, changes that remained in place even once many workplaces resumed operations. As a result, Gerometta said, traffic is worse than it has been in years.

“The air stinks now, that’s what everybody is saying,” she said. “You can feel it, and you can see it: The air is all blurred because the pollution decreases the level of visibility.”

The chance for an environmental “reset” was initially touted as a potential silver lining of the pandemic. But a year on, its long-term environmental impact looks less rosy.

Activists and NGOs across Europe and around the world report that mining, deforestation, dam construction and other ecologically damaging activities are continuing apace, or even being sped up. Meanwhile, their own ability to respond, whether with protests or through participation in legislative and planning processes, has been constrained by anti-coronavirus measures.

For the climate movement, that shift has been particularly stark.

“2019 was such a big year, especially for the youth,” said Ariadna Rodrigo, democracy policy adviser for Greenpeace’s European unit. “It was incredible to see this massive explosion of climate protests all over Europe. And then it just suddenly stopped.”

More than half of EU countries “failed to safeguard people’s right to peaceful assembly” during the pandemic, according to a report published in September by Greenpeace and the Civil Liberties Union for Europe. It cited Belgium, France, Germany, Italy, Romania and Slovenia among those that adopted blanket or near-total bans on demonstrations. In some cases, these bans stayed in place even when other coronavirus measures eased.

“The right to protest is under threat in Europe,” said Aaarti Narsee, a researcher at Civicus, an NGO that tracks civil liberties. “What we see from our data is that governments have used the pandemic as an excuse or a pretext to further intensify restrictions.”

Governments across Europe argued restrictions on freedom of movement and assembly were necessary to combat the spread of the coronavirus. In many cases, however, activists and watchdog groups challenged such measures, saying they went beyond what was needed to protect public health. In Germany and France, courts agreed, ruling that tight bans were disproportionate.

In countries where political opposition is already imperiled, the pandemic offered a new tool for suppression.

In Turkey’s Aydın province, dozens of villagers were fined upward of €400 each — more than the country’s monthly minimum wage — for violating social-distancing rules while protesting the construction of a geothermal power plant that threatens their air quality and the fig and olive trees that provide their livelihoods.

Environmentalists opposing a gold mine in the province of Çanakkale were similarly cited for entering a forest declared off-limits under coronavirus restrictions — a prohibition which, they noted, did not apply to the mining company’s employees.

Limits on protests aren’t the only way that environmentalists have been hindered by the coronavirus.

“Our scientists haven’t been able to travel to collect data about animal populations that might be impacted by dams and that could form the basis for legal challenges in the case of red-listed species,” said Ulrich Eichelmann, founder of the NGO RiverWatch.

Meanwhile, he added, “investors used the window of opportunity when people weren’t allowed to leave their homes to start construction” of controversial dams and hydropower plants, including one on the Ötztaler Ache in Austria’s Tyrol province, a river popular with whitewater kayakers.

During lockdown periods last spring, dams were being built without proper permits in Bosnia and Herzegovina, industrial pollution of waterways increased in Bulgaria, a law to fast-track construction projects was drafted in the Czech Republic, and illegal logging continued in Moldova, according to a report released in October by the Czech environmental NGO Arnika.

In Turkey, the government in late March 2020 approved construction of a third coal-fired power plant in the town of Afşin, already the world’s 12th-largest hotspot of anthropogenic sulfur dioxide (SO2) emissions. In June, six coal plants shut down in January 2020 for environmental reasons were given temporary working permits to reopen.

“We already know that communities with long-term exposure to air pollution are more vulnerable to COVID-19 and in the middle of a public-health crisis the government should have kept those plants closed, but instead it was just business as usual,” said Gökhan Ersoy, climate and energy project officer for Greenpeace Mediterranean.

A broader opportunity to do things differently is at risk of being squandered in Europe, according to CEE Bankwatch Network, an NGO that has raised concerns about the lack of transparency and public input in the national spending plans for the European Union’s post-pandemic recovery funds.

“The spirit of the strategic environmental assessment required by EU law is that [public] consultation should be done early, when all options are still on the table,” said Raphael Hanoteaux, EU policy officer for Bankwatch.

But with spending plans due in April, he said, “our colleagues in Hungary are reduced to commenting on a basic 12-page draft. Those in Italy say, ‘Industry is sitting with government and discussing the plans and we’re not in there.’”

Rolling back or circumventing public participation requirements has been a hallmark of the COVID-19 period, campaigners say.

Greece passed a law weakening environmental standards while the country was in lockdown, while Hungary, Slovenia and Ukraine all took measures to restrict civil society’s ability to participate in environmental decision-making, according to the Arnika report. In Spain, a promised nationwide Citizen Assembly on Climate Change has been delayed for more than a year.

“We’ve seen that the pandemic has been used by a majority of EU governments as an opportunity for less participation, for expedited lawmaking, for projects to go unchecked or unchallenged,” said Greenpeace’s Rodrigo. She also cited a new decree-law in Spain’s Andalusia province that speeds up approval processes at the expense of environmental oversight.

Despite all the obstacles, however, activists have managed to keep finding ways to get their message out.

Greenpeace used a hologram to place virtual demonstrators in Brussels as part of a digital climate strike in April, while climate protesters in Berlin hung up 10,000 footprints to represent supporters who couldn’t travel to join them. The Fridays for Future movement organized worldwide “shoe strikes,” with rows of footwear standing in for protesters in prominent public places.

Karolina Fabianova, project and communications manager for Youth and Environment Europe (YEE), an alliance of youth-led organizations, said such creative solutions had been — and could continue to be — important, especially in places where protesting was difficult even before the pandemic.

As a silver lining, she mentioned easier access to politicians and officials thanks to the increased use of digital meetings.

“YEE has also found it easier to get meetings with decision-makers in Brussels through digital forms,” said Fabianova, pointing as an example to an online dialogue the group organized with the EU ambassador to the Arctic about the needs of indigenous young people. “We’ll definitely continue using these new tools in combination with traditional forms of activism.”

No time to go wobbly on EU’s vaccination strategy

Trump celebrates economic news: ‘This is a great day’ for...

Brussels plans to counter Chinese and US subsidies above...