BUENOS AIRES—When Mirta Otero answers the phone, her tone is reserved, less cheerful than usual. She says that she has contracted the coronavirus and is now one of the many […] The post Community Kitchens Sustain Argentina’s Working-Class Neighborhoods appeared first on Latin America News Dispatch.

BUENOS AIRES—When Mirta Otero answers the phone, her tone is reserved, less cheerful than usual. She says that she has contracted the coronavirus and is now one of the many cases in her neighborhood. Otero is being treated at the Muñiz Hospital, in Villa 21-24, an informal neighborhood in the Barracas district south of Buenos Aires.

Even though she is hospitalized, Otero continues to help others. A little more than a week ago, she left her son Maximiliano in charge of El Comedor Gargantitas, a soup kitchen where they deliver about 1,300 food rations a day.

“I try to make the cooks feel as good as possible because there’s a lot of fear with everything that’s going on,” says Maximiliano. “People are in great need, and they keep coming until the pots are empty.”

Structural inequalities have become more apparent in the COVID-19 pandemic. Argentina is no exception, and soup kitchens like Otero’s are often the last line of defense for poor families. While Argentina garnered early praise for its coronavirus response, life in the country’s most vulnerable neighborhoods is becoming increasingly difficult as the pandemic deepens the severe economic crisis following former President’s Mauricio Macri’s four-year administration.

The recent report “Impoverishment and social inequalities in times of pandemic,” from a series of studies published by the Argentine Social Debt Observatory (ODSA, for its acronym in Spanish), found that the majority of people living in poverty and vulnerable situations in Argentina today are under enormous strain. Specialists attribute this to several causes: loneliness, the risks of cohabitation, the lack of income from informal jobs that families rely on, and the impossibility of receiving the necessary care during the COVID-19 pandemic. Consequently, marginalized sectors of society are more likely to be exposed to the virus and other diseases, such as dengue.

Compulsory social distancing led to a significant fall in household income. According to the report, in the metropolitan area of Buenos Aires, 38.8% of households stated that family income during the month of April had fallen by up to 50%, while for 18.8% the reduction was greater than 50%.

“Although necessary, compulsory social distancing generates exclusion for those whom effective social inclusion policies have not yet reached,” specialists say in the report.

The early implementation of Argentina’s compulsory social distancing policies attracted international attention for its effectiveness in slowing down the spread of the virus. In fact, a few days after the start of the quarantine, President Alberto Fernández assured the public that “economy will recover, but you can’t recover from death,” indicating his government had taken the right path.

To date, there are 44,931 people infected of coronavirus and 1,049 deaths in the country. Buenos Aires and Chaco are the provinces with the highest incidence.

Although the virus arrived in Argentina in mid-March, when most of those infected were upper-class people who had contracted it on their trips abroad, today the situation has changed.

In September 2019, the National Institute of Statistics and Censuses (INDEC, for its acronym in Spanish) reported that poverty rates had risen by more than 8% during the first half of the year, reaching 35.4% of Argentines: approximately 15.8 million people.

The role of the comedores (soup kitchens) in the most vulnerable neighborhoods has been essential during the social and economic crisis, when basic inputs are scarce. “The logic of the comedores has always been to solve the problems of the neighborhoods in the face of the lack of state intervention,” explains Pablo Vitale, co-director of Asociación Civil por la Igualdad y Justicia (ACIJ), a non-profit organization that works to defend the rights of society’s most vulnerable.

“We are completely abandoned and surviving thanks to the solidarity of the people and the help of the food bank,” says Gilda Prieto, founder of two comedores that depend on the non-profit organization Madres sin Techo. They are in La Rubita, a settlement where 3,000 to 4,000 families live on the border between Resistencia and Barranquilla, in Chaco, one of Argentina’s poorest provinces. 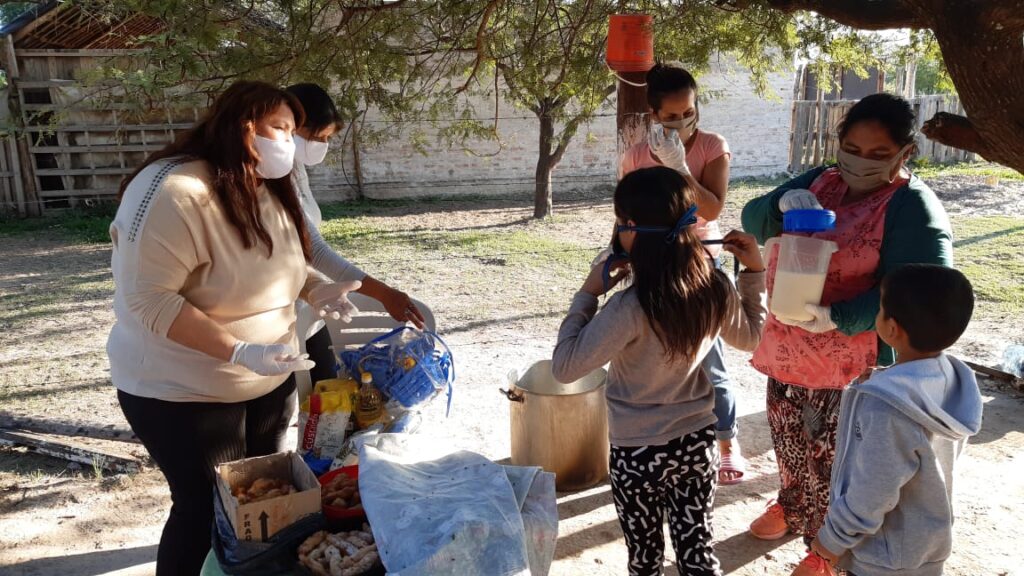 People gather for a meal at a community kitchen in La Rubita (Pablo Videla).

According to a survey by Banco de Alimentos —a food bank that increased the volume of food and products delivered by 66%— only 30% of the organizations that provide food assistance can meet the current demand.

The villas were already facing inequities, says Vitale, “[including] the lack of essential services like access to water or overcrowding.” In the face of the pandemic, “[they] need to mobilize for survival, from commuting to getting food rations.”

Vitale has worked in Villa 31, the most emblematic popular neighborhood in Buenos Aires, for 20 years. It is located next to the capital’s main passenger transfer center and just a few meters from Buenos Aires’ wealthiest neighborhoods.

Vitale says that these neighborhoods need alternatives, because for their residents it is not possible to apply the official prevention measures. “You can’t ask people who don’t have a house to comply with isolation. Yesterday I heard a phrase that resonated with me: ‘Isolation is a class privilege.’”

The comedores have long played a central role in the life of these communities and, during the pandemic, new organizations began to emerge to assist more people every day.

The ollas populares (informal soup kitchens) were born in 1989 during the crisis of hyperinflation. Later, these ollas populares were transformed into comedores and daycare centers. Today, they are maintained largely thanks to the help of the state or private donations.

While the soup kitchens provide sustenance, the villas face structural problems to managing the pandemic. In Chaco, Gilda Prieto in La Rubita says that one of the main problems is the lack of access to water. While water is essential to maintain health by washing hands, the current situation delayed the installation of a system to guarantee access to water in La Rubita. 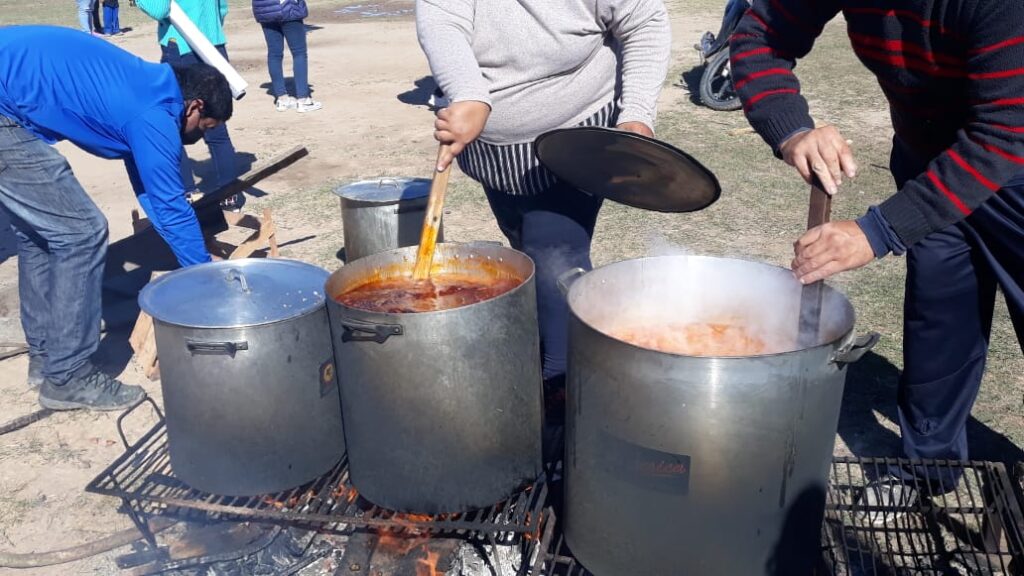 In addition to providing hundreds of food rations per day, the comedores also function as support centers, especially for women, children, and adolescents. “We also provide workshops and a space for women and children to gather, but with the pandemic we can no longer do that,” says Prieto.

The pandemic also uncovered the vulnerability facing women and children in Argentina. According to the gender-based violence observatory “Adriana Mariel Zambrano” of the Casa del Encuentro, there were 57 femicides of women and girls between March 20 and May 28. One in six of these women had filed previous complaints against their killer. In addition to the murdered women and girls, the 77 children who were left without mothers are additional victims.

Lidia Giagnoni knows what it is like to be hungry. The founder of the civil association Todos por los Niños was born in Villa Soldati and grew up between a nun’s school and the streets. At 15, she got married to become an emancipated minor, to be able to get a job. In 1998, after receiving her degree in nursing, she moved to Marcos Paz, a city in western Buenos Aires, with her children. She founded two comedores, one in the Barrio del Bicentenario and the other in La Trocha, two rural neighborhoods.

“Where I am in La Trocha, I see many middle-class people who, with the economic crisis of these recent years, are worse off. The pandemic was the straw that broke the camel’s back,” says Giagnoni, who receives about a hundred families a day.

Giagnoni says that mental health problems are one of the most serious consequence of the pandemic in vulnerable populations. Her comedor offers delivery of food rations and creates a space for communication and support.

On May 11, the “new normality” phase of the compulsory social distancing began. During this phase, sustained hygiene and precautions are encouraged. The entire territory has entered this phase, except for the districts where there is community circulation of the virus, such as San Fernando (Chaco), Rawson (Chubut), Bariloche and General Roca (Río Negro), the Gran Córdoba (Córdoba) and the 41 districts of the Buenos Aires metropolitan area. These areas are still in a more restrictive phase.

“There is a lot of uncertainty, and besides, there is no work,” says Giagnoni. “Here, the one who has a job is the one who travels to the city. Now that’s impossible because of the compulsory isolation.”