The president had a poor track record with Native Americans even before he decided to celebrate July Fourth at a landmark built on land stolen from an Indigenous tribe. 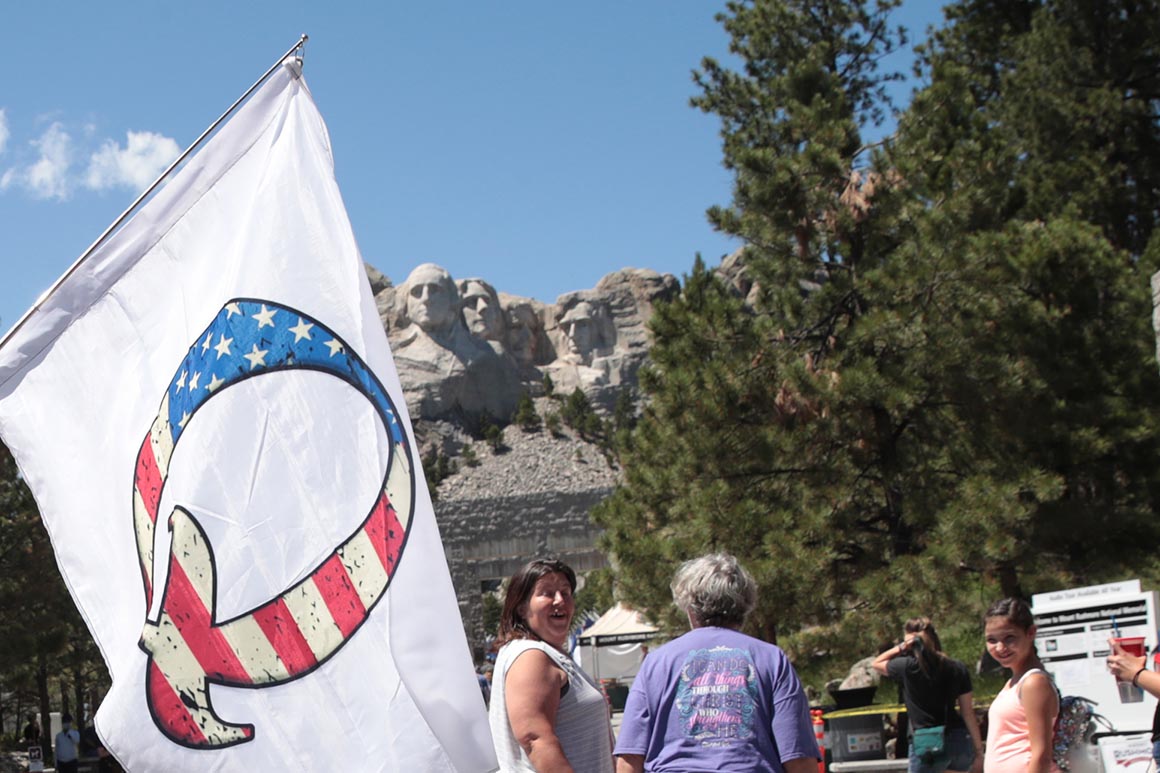 President Donald Trump is struggling to plan his grand spectacles without highlighting his fraught relationship with people of color.

He wanted to go to Tulsa, Okla., to relaunch his campaign mega-rallies — and ran into controversy over his decision to speak on Juneteenth at the site of one of the worst incidents of white violence against Black people in American history.

Now Trump is planning to visit Mount Rushmore on Friday to kick off Independence Day weekend with a glitzy fireworks display and a — and has run into strife and contention over his decision to celebrate at a national landmark built on land stolen from Native Americans at the same time the country is reassessing the offensiveness of such monuments.

In the days before his visit, some Native American leaders called for destruction of the massive sculpture — built in the Black Hills on land taken from the Lakota tribe to honor several presidents they say were hostile to Indigenous people.

And protesters are expected to greet Trump on his trip and express Native Americans’ broader grievances. Tribal leaders have criticized the president for what they describe as harmful policies, delayed and watered-down measures to help their community and his offensive language.

“Symbolically, he’s been a complete disaster for most people who follow Indian affairs,” said Matthew Fletcher, a member of the Grand Traverse Band of Ottawa and Chippewa Indians and director of the Indigenous Law and Policy Center at Michigan State University.

Trump’s frequent clashes with other demographic groups have only magnified in recent weeks as he struggles to win a second term on policies that often contradict his campaign’s attempts to slice into the Democrats' advantages with African Americans, Asian Americans and Hispanics.

Native American frustrations haven't garnered the same attention as other groups, sidelined in the Trump era the same way they have been for much of American history. Yet with a population of nearly 7 million, Native Americans could be crucial voters in several battleground states in November, including Arizona, Michigan, Minnesota, Nevada and Colorado.

“Our country has not been the best version of itself when we’ve dealt with Native Americans,” said Rep. Dusty Johnson (R-S.D.), who will attend the celebration at Mount Rushmore. “This is not unique to this president. These are decades long. These are legitimate complaints. Our federal government is not holding up our end of the bargain on things like health care, law enforcement. We have to do better.”

Trump’s trip to South Dakota comes as he resumes his own schedule and pushes Americans to do the same in the hope he can restore the coronavirus-battered economy before voters decide whether he deserves a second term in office. But the controversies around his travels have only grown as he travels amid the still escalating coronavirus pandemic and a national reckoning over systemic racism that erupted after the death of another Black man in police custody.

The White House and Trump campaign offered a list of policies the president has pushed that they say have benefited Native Americans: the first proclamation recognizing missing and murdered American Indians and Alaska Natives; a task force on protecting Native American children; a reactivated White House Council on Native American Affairs; and collaborating on rural broadband efforts.

“For too long, administrations of both parties were all talk and no action when prioritizing the relationship with tribal partners,” White House spokesman Judd Deere said. “In contrast, President Trump directed his staff to engage directly with tribal leadership to build partnerships, advance Indian Country priorities, and ensure that all Americans are afforded an opportunity to thrive and prosper.”

But tribal leaders tell a different story. The National Congress of American Indians, which bills itself as the oldest and largest group representing Native Americans and Alaska Natives, says it has urged Trump for more than three years to talk to them about policy the way previous presidents did — to no avail.

“We have yet to engage with the president in a very meaningful way,” said Fawn Sharp, the group’s president.

Instead, Native American leaders say, Trump has enacted policies that actively hurt their community. He approved pipelines that will cross tribal lands and water supplies. He reduced the Bears Ears National Monument, created at the request of Native Americans. He is building a of Mexico through a sacred burial ground.

And while the administration giving hard-hit Native Americans and Alaska Natives $8 billion to tackle the coronavirus — the largest single program investment in Indian Country — tribes sued the federal government, alleging a delay in sending the money.

It’s not just about policy. Trump has been criticized for his rhetoric and symbolic actions toward the Native American community. He has defended the Washington, D.C., NFL franchise’s refusal to stop using a slang term for Native Americans as its name. In the Oval Office, he hung a portrait of former President Andrew Jackson, who forced thousands of Native Americans to relocate from the Southeast to the West on the "Trail of Tears."

And he keeps using the name “Pocahontas,” who was captured by colonists as a girl, as a pejorative nickname for Sen. Elizabeth Warren. He even used it during a 2017 event at the White House with Navajo Code Talkers, who helped transmit secret messages that helped allied forces win World War II. The incident angered Native American leaders.

“It’s about being that leader that can transcend above the fray and above the conflict and the divisiveness to recognize and appreciate a community’s views, perspective, their identity, the stretch of the diversity of this country,” Sharp said.

While Native Americans’ criticism of Trump has largely been kept out of the national conversation, his decision to celebrate America’s 244th birthday with a showy display at Mount Rushmore has put a spotlight on these disputes. He will be the 16th president to visit the site.

"Visitors look upon the faces of those presidents and extol the virtues that they believe make America the country it is today,” said Harold Frazier, chairman of the Cheyenne River Sioux Tribe. “Lakota see the faces of the men who lied, cheated and murdered innocent people whose only crime was living on the land they wanted to steal.”

But Johnson, the South Dakota Republican, predicted Trump will be greeted warmly by the “overwhelming majority of South Dakotans of all races and creeds,” the same way President Barack Obama was in 2016 when he visited the state.

“Mount Rushmore symbolizes liberty, freedom and equality,” Johnson said. “It seems like the kind of symbol and memorial we should be rallying around as a country during these times of political unrest.”

While many presidents have lacked strong relationships with the Native American community, tribal leaders did praise Obama in 2014 when he became the fourth president— after Calvin Coolidge, Franklin Roosevelt and Bill Clinton — to visit a Native American reservation. Obama also traveled to Mount Rushmore as a candidate in 2008, while first lady Michelle Obama saw it with her daughters in 2012.

Four presidents — George Washington, Thomas Jefferson, Theodore Roosevelt and Abraham Lincoln — were chosen for the famed stone carving because they “the founding, expansion, preservation and unification of the United States,” according to the National Park service. But Native Americans associate the leaders with owning slaves and mistreating Indigenous people.

“The men honored on Mount Rushmore weren’t perfect; nobody is,” South Dakota Gov. Kristi Noem, a Republican, said in a statement after some called for the monument to be destroyed. “They all had flaws. But they all had tremendous virtues as well, and they did incredible things for our country.”

Noem has said Trump once told her he wanted to be carved in the mountain. At a 2017 rally in Ohio, Trump suggested it himself.

About 7,500 people are expected at Mount Rushmore on Friday even amid guidelines limiting gatherings around the country. Attendees will be given face masks, but they will not be forced to be socially distant in an area susceptible to wildfires.

“We're going to have a tremendous evening,” Trump told reporters Thursday. “It's going to be a fireworks display like few people have seen.”

Trump will immediately fly back to Washington to celebrate July Fourth on Saturday. Another protest will be waiting for him.

UK to allow quarantine-free travel with nearly 60 countries — but not the U.S.

‘I am lonelier than I have ever been. No one has touched...