EU countries and MEPs can't agree on who should lead the Conference on the Future of Europe — with neither side willing to give in. 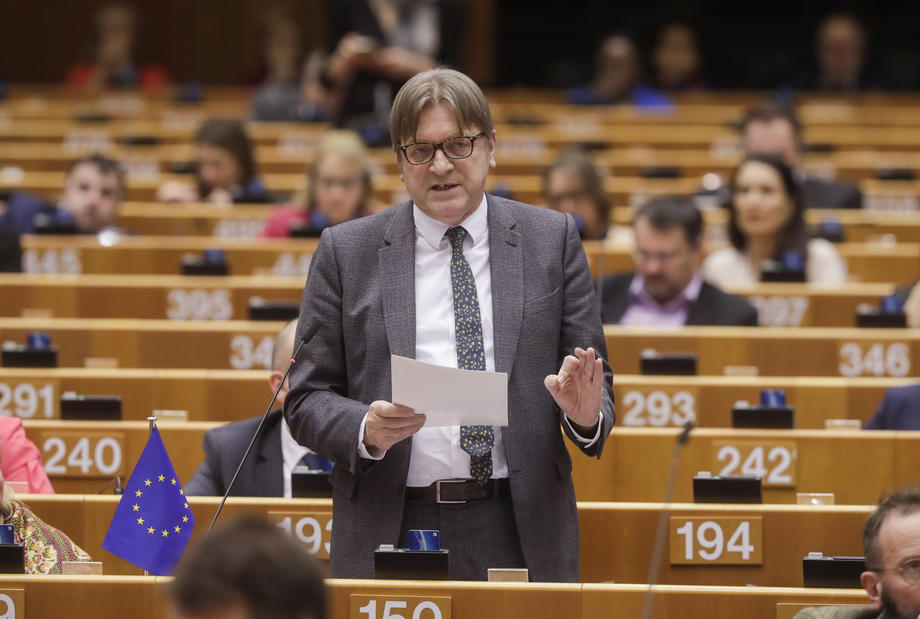 It is the big idea to ask EU citizens how the bloc should be reshaped, but despite Commission President Ursula von der Leyen’s enthusiasm to hit the start button, a behind-the-scenes contest over who should be in charge threatens to upset her plans.

Von der Leyen said Thursday that the Conference on the Future of Europe, is “almost ready to start” — months after its planned debut in spring. “It was difficult to get the conference started because of [the coronavirus pandemic], but it is absolutely necessary and we are eager to get it started,” she said.

All three EU institutions have agreed (more or less) on the scope and general outline of the conference, but an ongoing battle to find a charismatic EU figure to preside over the debates has delayed efforts to get the event off the ground. Officials say the Council’s rebuke of Guy Verhofstadt, the European Parliament’s candidate to lead the conference, has kicked off a leadership contest, with new names, including Alexander Stubb, a former Finnish prime minister, emerging as contenders for the prime position.

The continued stalemate triggered a warning from German EU Affairs Minister Michael Roth, who is in a leading negotiation role as part of Germany’s presidency of the Council of the EU.

“We have to move forward now. And we can’t let [the conference] seriously fail just because no agreement has yet been reached on who will take over the chairmanship,” Roth told POLITICO.

French President Emmanuel Macron came up with the idea for the conference in 2019.

The minister warned that the delays were threatening the already “ambitious” timetable for the conference: “If possible, we want to organize the kickoff during the German presidency,” which runs until the end of the year, Roth said. “And then it should be brought to a conclusion under the French presidency of the Council of the EU, meaning in the first semester of 2022. There is little time.”

French President Emmanuel Macron came up with the idea for the conference in 2019, arguing it should “propose all the necessary changes to our political project, without any taboos, not even treaty revision.”

The European Parliament has been a keen supporter of the project, calling for the establishment of citizens’ agoras to discuss how the EU should be reshaped, from allowing voters to choose MEPs from transnational lists to the EU’s use of qualified majority voting to speed decision-making.

The Parliament was the first institution to officially name someone for the post of heading the conference, back in January — Verhofstadt, a liberal MEP and former Belgian prime minister. That backing was reiterated on Wednesday at the Parliament’s Conference of Presidents, the gathering of its political leadership, a spokesperson for European Parliament President David Sassoli said.

Yet several national governments have expressed strong opposition to Verhofstadt because of his federalist views. That aversion was already clear in June, when EU countries adopted their position on the conference, in which they stressed that it should be led by an “independent” person — a reference meant to exclude the former Belgian prime minister who is known for his outspoken advocacy for more European integration. At the Parliament’s Conference of Presidents, Sassoli told group leaders that “the Council sticks with the principle of a single and independent president,” a Parliament official said.

While Roth did not mention Verhofstadt by name, he issued a pointed message to Parliament that it should reconsider nominating the prominent Belgian politician. “This is not supposed to be a show of some grand seigneur of European politics. This is not a profiling event for a few,” he said.

French MEP Stéphane Séjourné, an ally of Macron, conceded that Verhofstadt had been rejected by EU countries. “In the end, we all agree on the concept, the timetable … And then it takes again another six months because we discuss who is it going to be,” he said, adding: “I would have liked this conference to be led by someone from my own political family … but he [Verhofstadt] did not gather unanimity in Coreper [the meetings of ambassadors from EU countries], and they wanted someone else.”

Séjourné said that the question of the leadership is “a side issue compared to the establishment of the conference, but if it hinders the process of establishing it, we must solve it soon. And we can find many smart people with great European experience who can embody the idea.”

EU countries have begun floating new names for the job including former Finnish PM Stubb, but officials were cagey about others potentially in the frame for fear that a candidate could crash early without having the chance to gain momentum.

An Elysée official denied there was a rift between Berlin and Paris over who should get the job. “There are Franco-German reflections on the issue, no disagreements, it will be a collective decision in the end,” the official said.

But Dacian Cioloş, leader of the Renew Europe group, insisted that Parliament should stick by its candidate, despite efforts by EU countries to bring up alternative names.

“Renew has an excellent candidate to chair the conference who ticks all the boxes: Guy Verhofstadt,” Cioloș said. “He is not only the Renew candidate but also the European Parliament’s candidate. It’s very important for us that this conference is an opportunity to engage with the citizens. Guy has all the energy, skills and experience to do so.”

This old house: Austria torn over what to do with Hitler’s birthplace