Coronavirus in Canada: These charts show how our fight to ‘flatten the curve’ is going

Some provinces are having more success than others at stemming the tide of COVID-19 cases and deaths, but Canada’s chief public health officer warns all provinces that it is too early to loosen restrictions The post Coronavirus in Canada: These charts show how our fight to ‘flatten the curve’ is going appeared first on Macleans.ca. 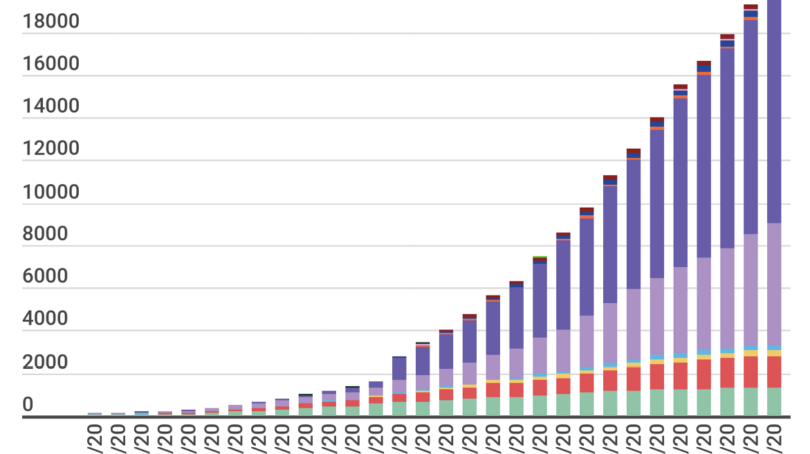 More than a month after most of Canada shut down and went into self-isolation, the nation’s provinces appear to be slowly dividing into two separate COVID-19 trajectories.

There are the big provinces that continue to post significant numbers of new cases daily, in particular Ontario and Quebec, and, to a lesser extent, Alberta. Each of those provinces have daily increase rates of at least five per cent, based on a seven-day rolling average. For example, Ontario announced 55 deaths and 564 new cases on Friday, both daily records for the province. Some 830 Ontario residents have been hospitalized, with 245 in the intensive care unit. 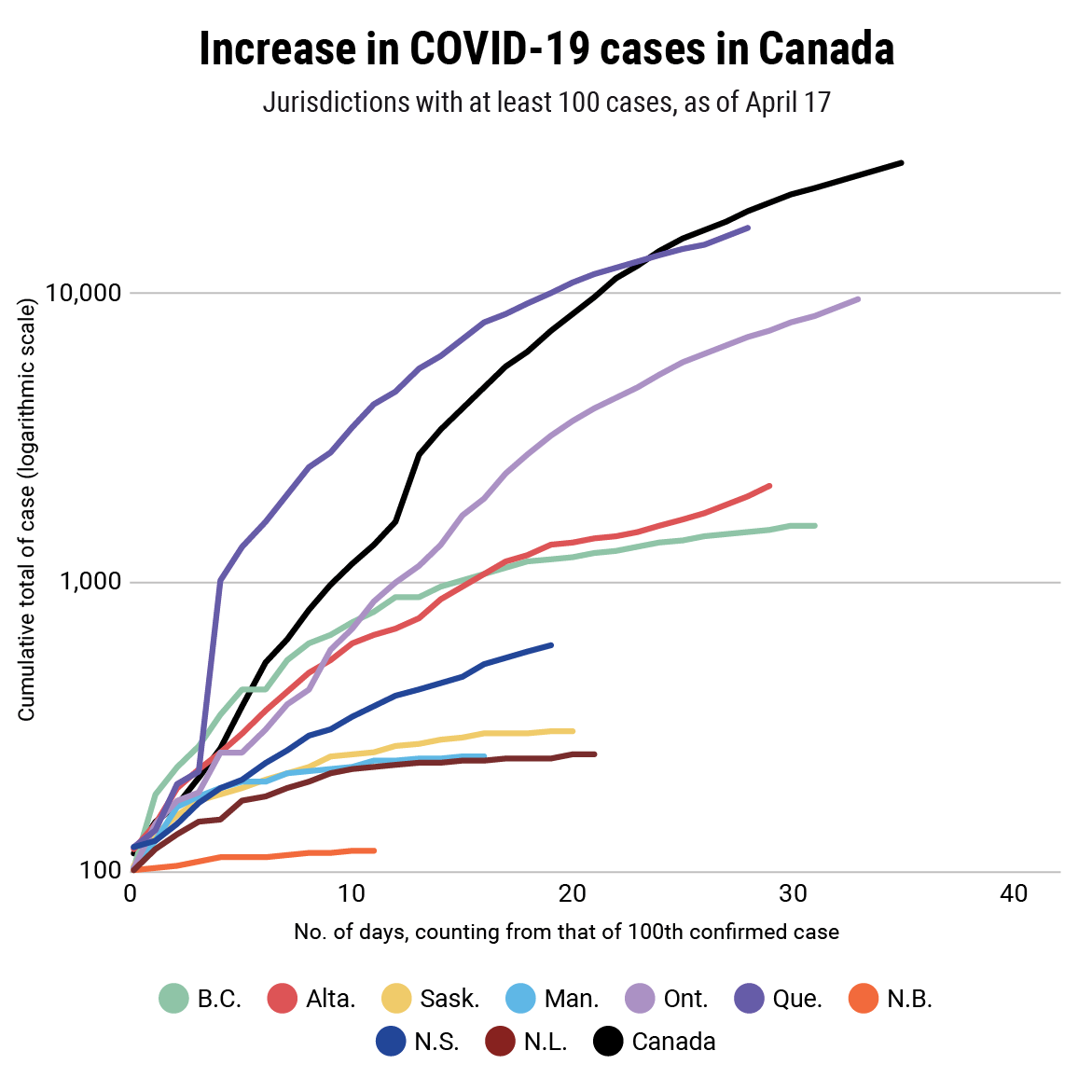 The smaller provinces, plus British Columbia, are reporting trickles of new cases in recent days, giving them daily increase rates of two per cent or less, well below the national rate of five per cent. For example, Saskatchewan announced just one new case on Thursday, while only seven people are in hospital, with none in the intensive care unit. That same day, New Brunswick posted no new cases, with just six in hospital and 3 in the ICU (of 13 hospitalized since the start of the pandemic.)

One of Canada’s smaller provinces, however, doesn’t have such an ultra-slow rate of new cases: Nova Scotia. Last Friday, it had 407 cases. By Friday, April 17, the number rose to 606—a daily increase rate that matched Ontario’s at five per cent.

Like Ontario and Quebec, one reason for Nova Scotia’s climbing caseload is the presence of COVID-19 at long-term care (LTC) homes. In particular, the Northwood continuing care facility has had an outbreak at its Halifax campus since early this month. As of April 16, 42 residents and 26 staff have tested positive, an increase of nine cases from the day before.

In addition, Nova Scotia tests for COVID-19 more than any other province: its cumulative testing rate is 1,947 per 100,000 population, just slightly higher than Alberta at 1,937 and nearly double that of New Brunswick at 1,194. And like the other smaller provinces, its death toll has stayed low—four in total—while it has just five patients in the ICU with another six in non-ICU hospital beds.

As calls grow to loosen the restrictions in provinces that appear to have flattened the curve, at least for now Canada’s chief public health officer Dr. Theresa Tam has a warning for the entire nation: “There will only be unpleasant surprises if we quit early.”

Why use percentage charts: By looking at the percentage change in cases, it’s easier to see trends that are not apparent in raw numbers. Daily increases can fluctuate wildly—such as when Quebec combined its confirmed and probable cases into one number on March 24, which resulted in a one-day spike of nearly 800 cases. So, to help see shifts without the graphic “noise” generated by those daily fluctuations, we’ve used a method called a rolling (or moving) average (which includes comparing percentage changes between seven-day averages) that smooths the lines for each jurisdiction and allows trends to be more readily apparent. 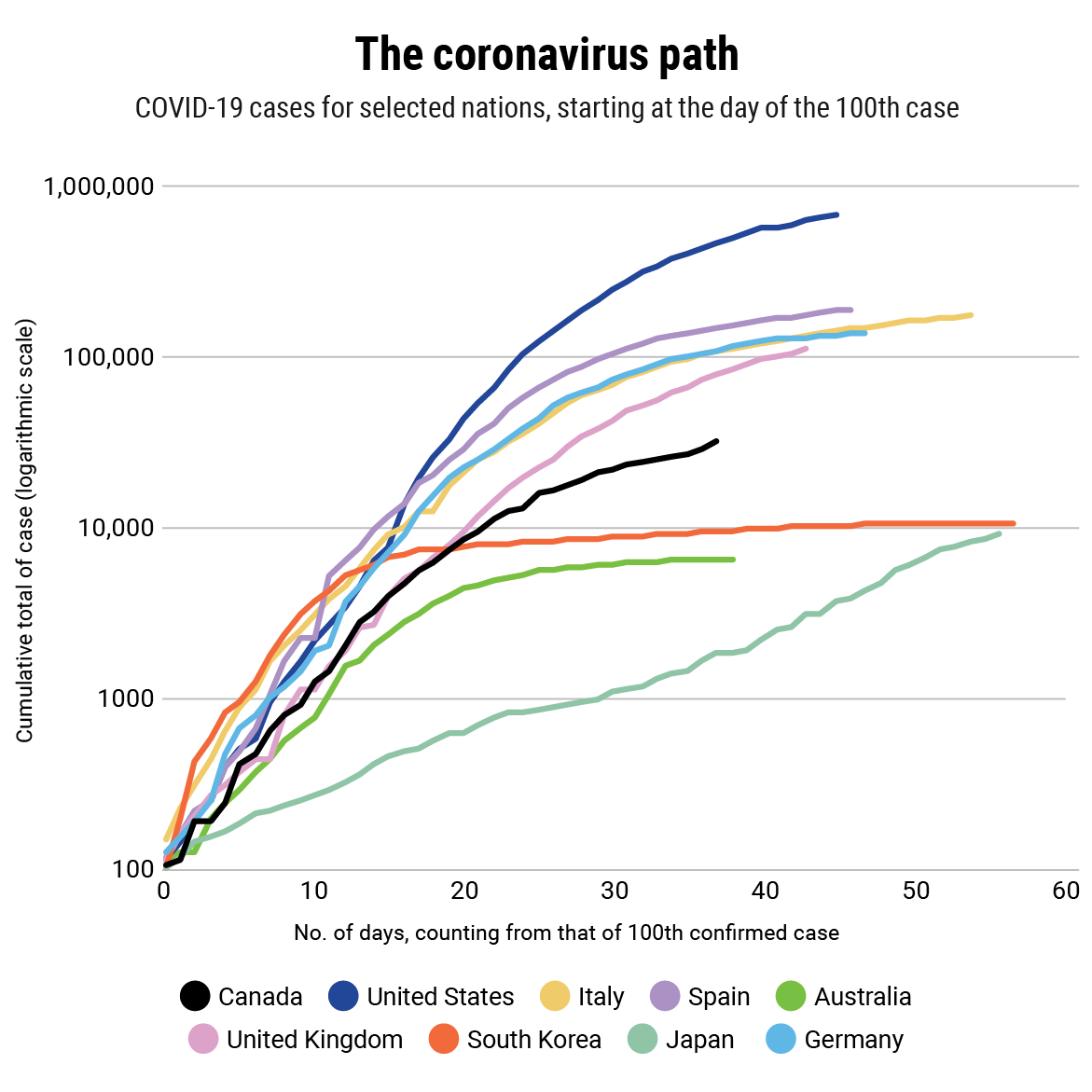 Why use logarithmic charts: COVID-19 is increasing at an exponential pace, which can overwhelm normal linear charts. In contrast, overall trends are apparent when compared using a logarithmic chart. To explain his popular COVID-19 logarithmic charts on the Financial Times website, data expert John Burn-Murdoch has this handy explanation: the space between 100 and 1,000 is the same as the space between 1,000 and 10,000, because exponential increases means it takes the same amount of time to go between those two milestones. That allows readers to easily see if jurisdictions are following the same path or doing better or worse.

The post Coronavirus in Canada: These charts show how our fight to ‘flatten the curve’ is going appeared first on Macleans.ca.

The unsustainability of modern life and how COVID-19 may be exposing cracks in our...