Cosmic filaments may have the biggest spin in outer space

These rotating threads of dark matter and galaxies stretch millions of light-years. Scientists want to know how their spin begins. 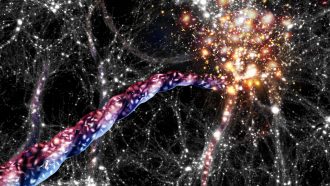 Moons do it. Stars do it. Even whole galaxies do it. Now, two teams of scientists say the universe’s largest known structures do it, too. Cosmic filaments spin. These huge threads stretch hundreds of millions of light-years in space and twirl like giant corkscrews.

Cosmic filaments are dense, skinny strands of dark matter and galaxies. They hold most of the universe’s mass. You can think of filaments as the threads connecting the cosmic web. As filaments twist, they pull matter in and toward galaxy clusters at each strand’s end.

The Big Bang is the explosion of matter that started our universe. At that instant, matter didn’t rotate. Then, as stars and galaxies formed, they began to spin. Until now, galaxy clusters were the largest structures known to rotate.

Noam Libeskind is a cosmologist at the Leibniz Institute for Astrophysics Potsdam in Germany. “Conventional thinking on the subject said that’s where spin ends,” he says. Torques are the forces that produce spins. “You can’t really generate torques on larger scales,” he says.

Filaments are so big they make galaxies look like specks of dust. So it’s a puzzle to discover that filaments spin. “We don’t have a full theory of how every galaxy comes to rotate, or every filament comes to rotate,” says Mark Neyrinck. He is a cosmologist at University of the Basque Country. That’s in Bilbao, Spain.

To find out that filaments can rotate, Neyrinck and his colleagues used a 3-D computer model of the universe. They used it to predict the velocities of dark matter clumps moving around a filament.

Meanwhile, Libeskind and his colleagues searched for rotation in the real universe. The team mapped galaxies’ motions. Then the researchers measured the galaxies’ velocities perpendicular to the center of a filament.

Although the two teams looked for spin in different ways, they still found similar signs of rotational velocity. That’s “encouraging,” Neyrinck says. It suggests “that we’re looking at the same thing.”

Next, researchers want to tackle what makes these giant space structures spin, and how their enormous rotation began. “What is that process?” Libeskind says. “Can we figure it out?”

Ask Ethan: Why Is Biking A 4-Minute Mile So Much Easier Than Running One?

Ask Ethan: Why Is Biking A 4-Minute Mile So Much Easier Than Running One?

Most of us will never run a 4 minute mile. But on a bicycle, almost anyone can do it.Continue reading on Starts With A Bang! »

Most of us will never run a 4 minute mile. But on a bicycle, almost anyone can do it.

The superheroes in these comics were inspired by real scientists

Why Measuring Redshifts Isn’t Enough To Understand The...

36 Alien Civilizations In The Milky Way? The Science Behind...