Doug Ford, Bonnie Lysyk and a fight about who runs a pandemic response

Politics Insider, Nov. 26: Ontario's auditor general drops a special report on Queen's Park, Health Canada has some deets on Canada's vaccine plan and should Canada colonize the moon? The post Doug Ford, Bonnie Lysyk and a fight about who runs a pandemic response appeared first on Macleans.ca. 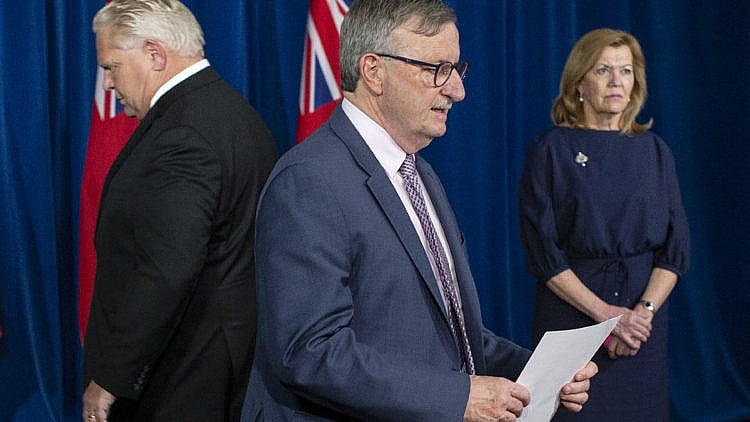 Doug Ford’s response to yesterday’s report from Ontario’s auditor general was unlike any response you’d ever hear in Ottawa. Usually, federal ministers caught in the federal auditor general’s crosshairs show contrition and resolve to do better. They almost never deny the AG’s conclusions. Not so yesterday at Queen’s Park. On the heels of Bonnie Lysyk‘s three-part special report on the province’s pandemic response, Ford gave no quarter.

Lysyk’s found that Ontario’s chief medical officer of health, Dr. David Williams, “did not lead” the province’s response and “did not fully exercise his powers” under the laws on the books. Lysyk went deep on the government’s emergency preparedness, outbreak planning, and testing and tracing capabilities. And the AG’s office is planning a second round of reports on COVID-19 expenditure management, PPE and long-term care.

Ford was unimpressed with the scope of Lysyk’s work. “I have some serious, serious problems with this report. To say that Dr. Williams wasn’t leading this response, it just isn’t right,” he said before firing a shot across the AG’s bow. “Don’t start pretending you’re a doctor or health professional, because I can tell you, you aren’t. Stick with the numbers, stick with the number crunching.”   And read Patricia Treble’s .

The COVID vaccine plan: As the Liberals take heat from their opposition for not clearly communicating its plan on vaccinating Canadians, Aaron Hutchins spoke to Health Canada’s chief medical advisor, Dr. Supriya Sharma, about what the feds can say about the vaccine rollout—everything from where doses will be manufactured to when we’ll all be stabbed in the arm. Here’s what Sharma had to say about the best-case scenario for getting inoculations underway:

We’re hoping that by January, at the earliest, we may be starting to immunize people. That means authorization is done. Logistics is sorted. And, most importantly, there has to be a vaccine to be distributed. We’re all gearing towards having vaccinations happen in the first quarter of 2021. But it can happen earlier if things move faster. It can also be later if issues come up.

In the most recent print issue of Maclean’s, Shannon Gormley writes that Canada’s salvation from our politically fraught neighbour to the south, and all its mass-manufactured instability, may require us to look up—way up—to that big ball of cheese in the night sky. Hear her out. She has a plan:

There are many things that are great about outer space—zero gravity! shooting stars! aliens, maybe!—but I think we can all agree that its most attractive feature is that it is not directly adjacent to the United States. Location is everything, and outer space was clever enough to position itself with an entire atmosphere between its boundary and the rapid descent into madness of the planet’s single most powerful actor.

ATIP of the day: A Department of National Defence briefing note on NATO burden sharing, prepared a few months before the military alliance met in December 2019, admitted that Canada “does not currently have a plan in place” to meet a shared commitment to spend 2 per cent of GDP on defence. The note, obtained by Maclean’s via an access-to-information request, positions the spending issue as a “top focus” for the Trump administration that would “feature prominently” at the summit. DND beefs up its overall spending totals by adding spending from other departments. The department redacted those figures from the briefing note, but a spokesperson said they add up to $5.3 billion per year. That takes overall 2019-20 spending to $29.6 billion, or 1.29 per cent of GDP.

A new StatsCan survey says 90 per cent of Canadians have either “some” or “a great deal of” confidence in police. But only 41 per cent were in the “great deal” bucket, and that number was lower for people who had physical disabilities, (38%) mental or cognitive disabilities (33%), visible minorities (35%), as well as Indigenous people (30%). Only 42 per cent said police were “treating people fairly.”

What is a hometown, anyway? Global News reporter David Akin raised some hackles with a tweet about Prime Minister Justin Trudeau‘s roots. The PM noted in question period that he’s a Montrealer and a Quebecer. Akin noted Trudeau was born in Ottawa and once called himself a proud Franco-Ontarien. He also lived in B.C. Does he get to be all of the above? At what point does a Canadian cease to be from one place and start to be from another? Let’s have a little fun with it. Comms pro Ian Capstick, a veteran of Parliament Hill, was a military brat who was born in Germany before growing up in Edmonton, working in Ottawa and moving to Montreal. Can you beat that? Email us your roster of hometowns. We’ll (with your consent) publish the most nomadic life lived in tomorrow’s newsletter.

The post Doug Ford, Bonnie Lysyk and a fight about who runs a pandemic response appeared first on Macleans.ca.