Turkish newcomer Dromeas Yachts has its sights set squarely at the outboard-powered runabout and SUV market dominated by the likes of Axopar, Nimbus and Finnmaster. Designer Adam Younger’s ‘tapered steps’ in the hull offer improved all-round performance Designed by British naval architect Adam Younger, its range of stepped-hull walkaround and pilothouse craft claim to offer strong performance and practicality with competitive prices. The Izmir-based company began building boats back in 2017 for the local market but it is now pushing hard into international markets with several new Younger-designed models in the pipeline […] This article Dromeas D28 first look: The Turkish newcomer taking the fight to Axopar appeared first on Motor Boat & Yachting. 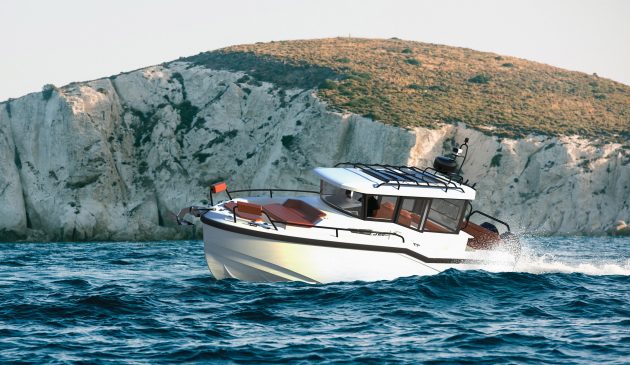 Turkish newcomer Dromeas Yachts has its sights set squarely at the outboard-powered runabout and SUV market dominated by the likes of Axopar, Nimbus and Finnmaster.

The Izmir-based company began building boats back in 2017 for the local market but it is now pushing hard into international markets with several new Younger-designed models in the pipeline and a newly appointed UK dealer, Saltwater Solutions in Poole.

Younger’s first project with Dromeas is the new D28, available in both WA (walkaround) and SUV (pilothouse) versions with anything from single to triple outboard installations. The hull has what Younger refers to as ‘tapered steps’, meaning the depth of the two steps reduce towards the chine.

He claims the steps deliver a more forgiving ride and better mid-range performance and fuel efficiency, while the tapers stop the hull sliding in sharper turns — often a problem with less sophisticated step geometries. All the hulls are resin infused for a stronger, lighter, more consistent build.

The Dromeas D28 WA features a central cuddy cabin design with a helm seat for two, an optional hardtop, tall bulwarks, a fold-down side gate with built-in ladder and plenty of versatile seating, table and sunpad options fore and aft as well as a fully-equipped wet bar. Below deck is a good-sized double berth and a separate heads compartment.

The SUV version sports a stylish wheelhouse with sliding side doors and a forward rake to the windscreen plus a good spread of indoor and outdoor seating. Prices have yet to be confirmed but a Dromeas D28 WA with a single 250hp Mercury or Yamaha should be about £95,000 inc VAT. A range of 33ft and 38ft outboard powered craft are also planned.

Custom Line Launches 11 Superyachts in First Half of 2020