After 18 long years of arcane text-based visuals, Dwarf Fortress is at last one step closer to being updated with proper tile graphics. 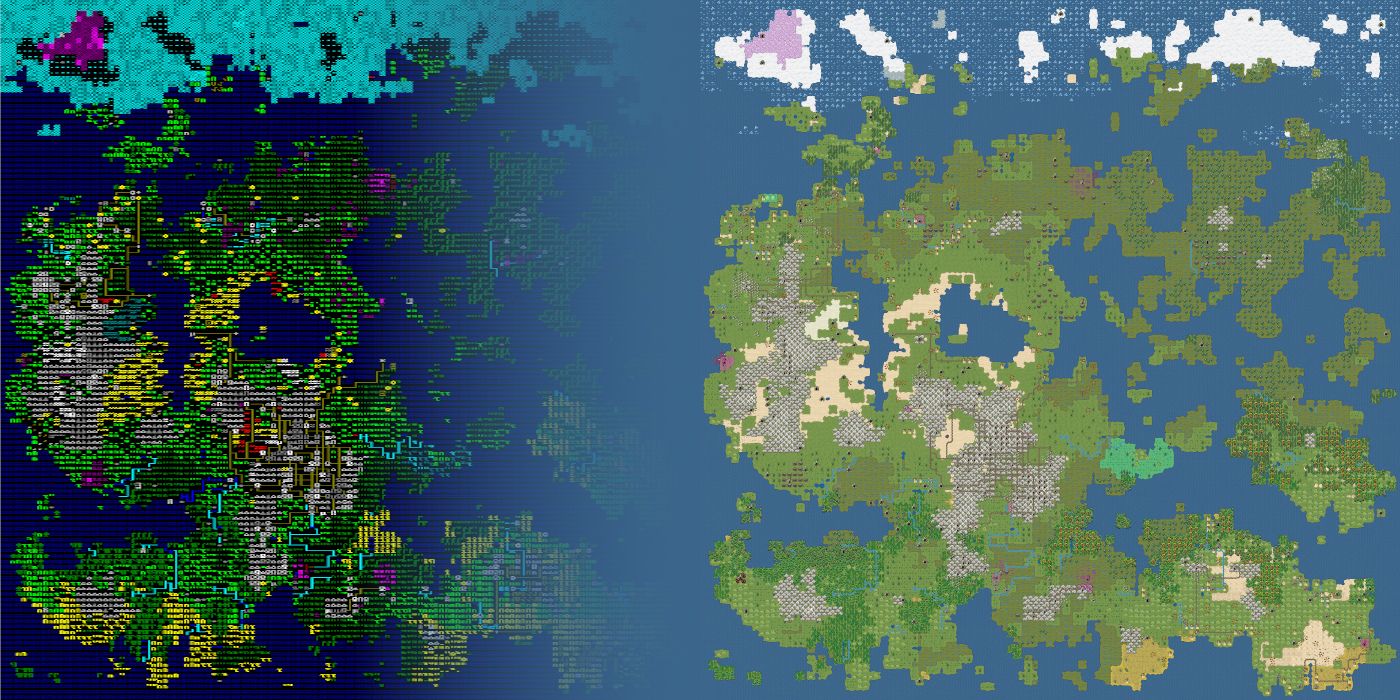 One of the most complex video games ever made, Dwarf Fortress, is finally replacing its signature ASCII art with tiles that resemble actual graphics, and it looks so, so much better than before. The always-improving game's near-incomprehensible text art has long been many players' main obstacle into mining deeper into the ore-rich mountain that it Dwarf Fortress, and now they're getting their chance at last.

Granted, graphic packs that overhaul the game's messy ASCII (American Standard Code for Information Interchange, the way in which text is encoded on computers) art style have long been available unofficially, but anyone who installs the game on Steam right now will still be greeted by an arcane world of symbols representing geography, resources, enemies, and their misadventurous dwarven charges. The game's unbelievably rich systems have been in development by brothers Tarn and Zach Adams since 2002, and they've long been content to give the game away for free while leaving it up to players to mod it if the ASCII art was too ugly for them. However, unfairly high US healthcare prices recently motivated them to begin updating it to appeal to more mainstream players.

In their most recent Steam community update, developer Tarn Adams shared progress made on the visual overhaul of the world map in Dwarf Fortress. Comparing screenshots of the same medium-sized map to highlight what a striking difference will soon be made by the graphical update, he admits that the old art's glyphs "difficult to distinguish" or "entirely unreadable" for some players. Meanwhile, the new version of the same world is "larger and square since [the game is moving] from 8x12 ASCII glyphs to 16x16 tiles," and it's clear at a glance to almost anyone that they're looking at a fantasy world of water, forest, and rock. Tarn says there's still lots of work to be done on "river mouths and wetlands and oceans and mountains and trees and so on," but even now the contrast is simply night and day.

For frustrated players who tried and failed to make heads or tails of what was going on in their Dwarf Fortress playthroughs, as well as those would-be players who saw the colorful ASCII chaos onscreen and summarily uninstalled, this is incredibly exciting news. Like Rimworld but extending to levels of systemic complexity that other construction and management sims can only dream of attaining, those who can stomach Dwarf Fortress's current visuals can attest that it is a gaming experience unlike any other. No two runs are alike, and the strokes of genius and abhorrent (but equally genius) atrocities against nature make up some of the most fascinating gaming stories on the internet.

Players of all ability and skill will soon be able to properly enjoy Dwarf Fortress when the developers roll out what they've shown off so far on Steam. This time, they'll have an easier time distinguishing their drunken dwarves from an immolated creature cat setting their tavern aflame.

Next: D&D Accidentally Stole A Race From The Creator Of Game Of Thrones

Why THTH Fans Shouldn't Be Surprised Harry Had Secret Flings