Early loser: Marcelo Bielsa and a season low for Leeds

Leeds turned in their worst performance … The post Early loser: Marcelo Bielsa and a season low for Leeds appeared first on Football News -. 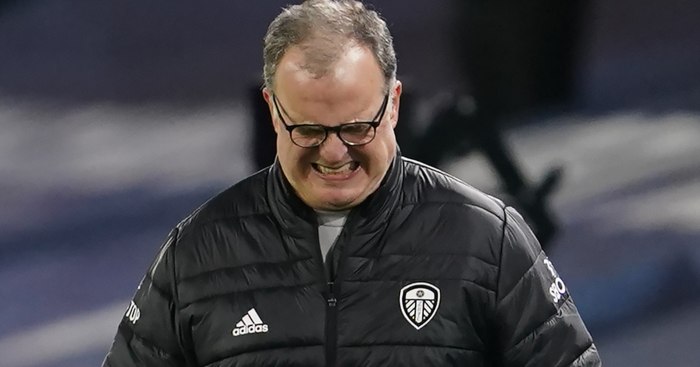 Do Leeds look, dare we say it, tired?

Marcelo Bielsa’s side certainly weren’t firing on all cylinders in . The Seagulls, winless in nine arriving at Elland Road, thoroughly deserved a much-needed victory to arrest their longest run without a victory since arriving in the Premier League in 2017.

For Leeds, it is now three defeats in eight days and no goals since they smashed five past West Brom before the turn of the year. Bielsa took responsibility for but while their latest loss can’t match the embarrassment of last weekend, the manner of it will surely concern the manager more than going out of a competition .

Their most obvious shortcoming was in attack. Back at home for the first time in three weeks, Leeds failed to pepper Robert Sanchez’s goal in their customary fashion. They mustered only seven shots all afternoon – only against Liverpool at Anfield did they attempt fewer – with just two on target. The Whites have averaged double those numbers in both metrics in all competitions so far this term.

The first half was particularly wretched viewing for Leeds supporters. They managed not a shot on target, nor did they find a team-mate with any of a dozen crosses. Which wasn’t always the fault of those delivering. When Ezgjan Alioski and Raphinha supplied the necessary quality, neither Rodrigo or Patrick Bamford could find the finishing touch. Or any touch whatsoever.

Bielsa reacted to last Sunday’s opening 45 minutes by making a triple half-time substitution but when change was required in the face of Brighton’s resilience, the Leeds boss left it as it was. Neither did he opt to switch Raphinha and Jack Harrison, who started on the left and right respectively. Both looked as if they would rather swap to their usual flanks but the only change involving Raphinha came when he was withdrawn with a quarter of an hour to go, when he continued his journey off the pitch and directly to the dressing room.

3 – Leeds United have lost their first three matches in a calendar year for the first time since 2014 under Brian McDermott, when they lost their first four in all competitions. Dip. pic.twitter.com/PWBgW2kQ1S

That was Bielsa’s third and final attempt to alter the momentum and his second substitution prompted some improvement from Leeds while Brighton sought to protect their slender lead. It centred on Pablo Hernandez replacing Alioski but with it, Mateusz Klich dropped into a deeper role, Pascal Struijk moved to centre-back, replacing Stuart Dallas who shifted to left-back, with Luke Ayling going to the right side of the defence. That, in hindsight, may be more akin to how Bielsa might wish he had started.

Struijk struggled as much as anyone in a white shirt. As a centre-back or in a defensive midfield role, which he was given today in Kalvin Phillips’ absence, the Belgian is a competent screener and stopper. But Struijk cannot dictate Leeds’ tempo in possession like Phillips does.

So it must have irked Bielsa to watch Ben White do exactly that in Brighton’s midfield. Leeds were desperate to sign White in the summer after a hugely impressive season on loan at Elland Road. , probably safe in the knowledge that the 23-year-old will next summer attract bids twice the size of those they received from West Yorkshire.

White was just one of Brighton’s impressive performers. Adam Webster, Lewis Dunk and Dan Burn restricted Patrick Bamford to just 11 touches – the Leeds striker completed four successful passes from seven attempted – while at the top end, Alexis Mac Allister built on his hugely impressive performance against Manchester City with another creditable display. The Argentinian provided the key moment, laying on Neal Maupay’s winner having originally penetrated Leeds’ defence with a sublime pass around the corner into Leandro Trossard. Mac Allister should be one of the most intriguing players to watch through the second half of the season.

Brighton now have 10 days before their next Premier League fixture at home to Fulham, with an FA Cup clash with Blackpool to attend to in the meantime. Leeds don’t play again now for a week and a half. Not ideal for a side keen to change their momentum, but though they haven’t been as busy as some of their Premier League rivals, it will give the players a breather that they appeared to need today, and provide Bielsa an opportunity to analyse every intricate detail of what is going wrong.

Because while Leeds supporters will defend Bielsa to the death in the face of criticism from outside Elland Road, they are justified in looking for answers from their leader. Some of his tactical decisions of late have been questionable, and this defeat highlighted again a lack of depth in some areas of his squad.

A signing or two might just distract some of those fans who are nervously looking over their shoulder after a goalless, pointless start to the year.

Watch: Mourinho asks if Bale “wants to go to Madrid and play no football”

Leicester v Southampton: Follow all the action LIVE on F365

Liverpool, Spurs there ‘until the end’ for striker before...