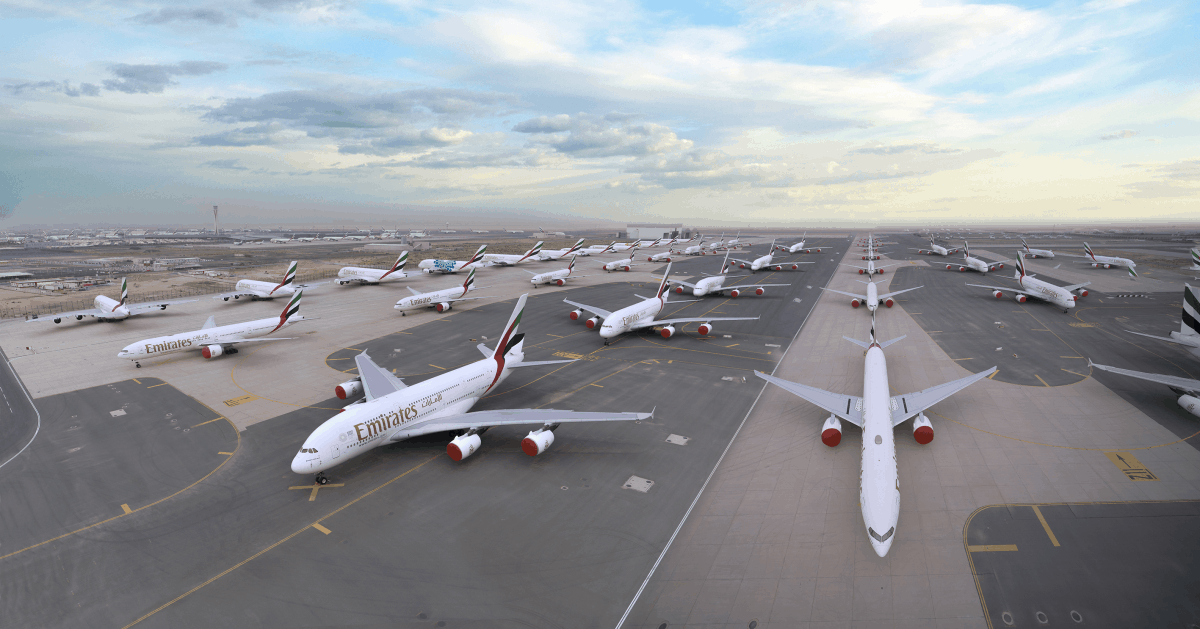 Emirates has been flying some of its Airbus A380 aircraft just 30 miles to Dubai World Central for storage. Eerie photos released by the carrier yesterday show the UAE carrier’s fleet grounded at the unfinished airport.

The unfinished Dubai World Central airport is intended to become a vast base for Emirates in the future. However, it is mostly used by cargo and low-cost carriers, in addition to the Dubai Airshow. However, its vast expanse of land means that it is perfect for storing aircraft. As such, the UAE flag carrier has been ferrying its aircraft to Dubai’s southern airport.

Emirates has flown 117 aircraft to Dubai World Central for storage so far. This figure is made up of both Airbus A380s and Boeing 777s. These are the only two types operated by the Dubai based airline. Emirates has 270 aircraft in its fleet. Of these, 218 have been stored. The remaining 101 are in storage at Dubai International Airport.

Emirates regularly stores small portions of its fleet when they’re out of action for 48 hours or more. Additionally, ten years ago, during the Icelandic volcanic ash cloud crisis, Emirates grounded a significant portion of its fleet.

Storing aircraft is no easy task. As such, deciding to store them is a decision that’s not taken lightly. Storing them takes time, and restoring them takes time too. Typically deserts are perfect places to store aircraft due to their low humidity. However, the plane needs to be protected from any possible contaminants such as dust and sand. In some cases, even birds!

To keep the aircraft secured, any ingress point will be covered, either with plastic or designated covered. This can include engines and data probes. Internally, all the window blinds are closed, and batteries disconnected. According to Emirates’ Senior Vice President Engineering, Ahmed Safa, storing each aircraft takes a team of four to six people around 12 hours.

What’s next for the fleet?

While the fleet remains grounded, Emirates’ maintenance team will inspect the aircraft every five to seven days. Quick checks involve walking around the plane to check everything looks okay. However, more intensive checks will see the aircraft powered up to verify that everything still works.

When Emirates decides that it wants to reintroduce the fleet, even more time is required. Four to five people are needed to complete the process, which takes up to 24 hours to complete. However, given that Emirates doesn’t appear to be resuming its regular schedule any time soon, there is plenty of time to plan the return.

When did you last fly on an Emirates aircraft? Let us know your thoughts in the comments!

Is It Fair That Only Some EU Airlines Are Getting State Aid?