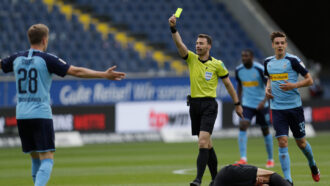 When the fans are away, the home team loses its sway. Or that’s one way to interpret the data from a new study.

Most teams tout their home-team advantage. They claim cheering fans can spur them to do their best. But COVID-19 put this claim to the test during the 2019–2020 European soccer season.

Last year, teams had to play in front of vacant stadium seats. Researchers at the University of Salzburg in Austria sorted through performance stats for these so-called “ghost games.” The empty stadiums helped level the playing field for visiting teams, the researchers now report.

Home teams tied about the same as before COVID-19 began spreading. But home teams won less than the year before, which means they lost more. Referees also doled out many more foul calls to home teams during the crowdless matches.

The two compared the outcomes of 645 games for the 2018–2019 season against the outcomes of 641 ghost games a year later. These matches involved teams from Spain, England, Germany, Italy, Russia, Turkey, Austria and the Czech Republic.

The rate of home-team wins fell by 8.3 percentage points — from 48.1 percent to 39.8 percent. The loss rate climbed by a virtually identical 8.4 percentage points (from 27.6 percent to 36 percent) when playing in front of empty seats. Richlan and Leitner also looked at how often referees issued foul calls in the form of yellow cards. This serves as one measure of how fan pressure on referees might have contributed to changing win-loss records. Without fans, foul calls against home teams increased by around 26 percent, the team found. At the same time, calls against away teams rose by only some 3 percent.

“Referees indeed give advantage to the home teams because of the crowds,” Leitner concludes. The new findings suggest that this referee bias tends to disappear when fans do. While it’s natural for people to change their opinions under pressure from others, Leitner says, hopefully these new data can help referees become more aware of their biases. “When you know it, you can train against it.”

Could Our Fundamental Constants Not Be Constant, After All?

Could Our Fundamental Constants Not Be Constant, After All?

Signals from across the Universe point towards a fascinating possibility.Continue reading on Starts With A Bang! »

Signals from across the Universe point towards a fascinating possibility.

Explainer: What is an electrode?

Teen athletes with even mild COVID-19 can develop heart...

How All Of Physics Exists Inside A Single Atom

This Is Why You Must Never Try And Colonize A Super-Earth...