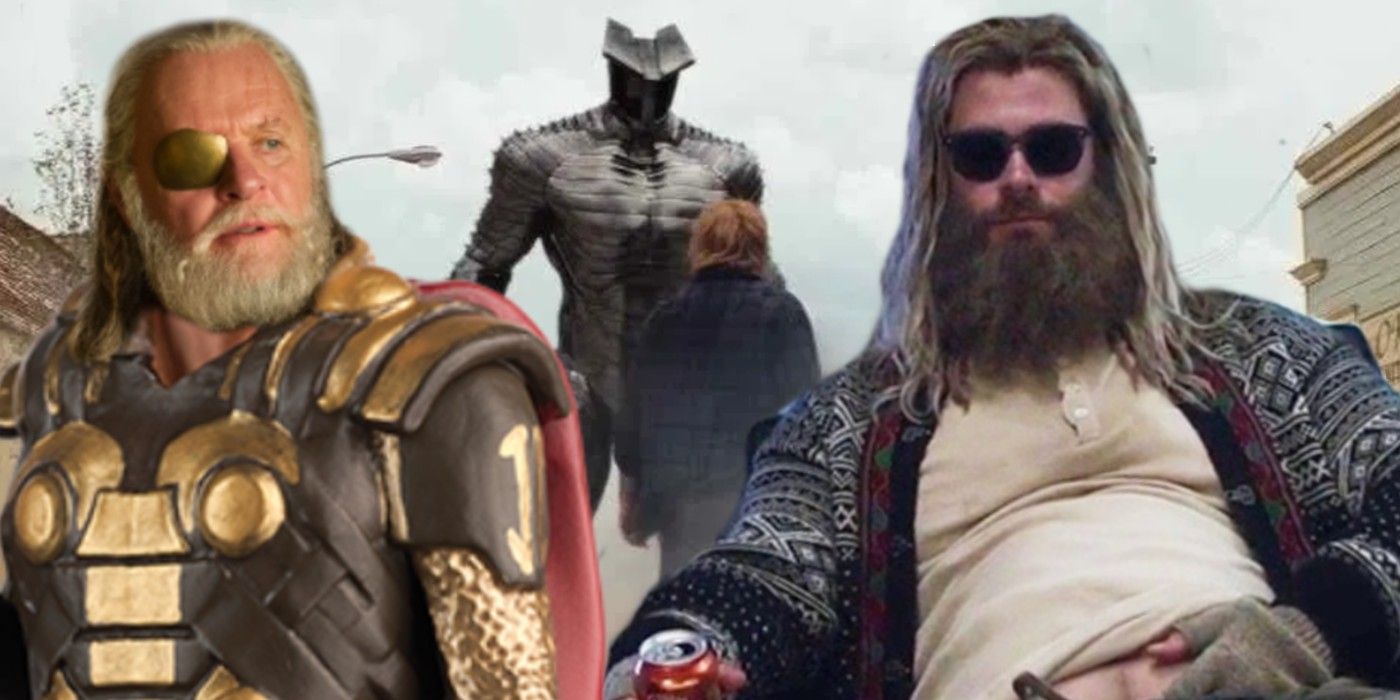 Fat Thor confirms that Thor didn't really learn the right lesson when he was exiled by Odin in Thor. After killing Thanos in Avengers: Endgame (the first time), Thor suffers something of a crisis of confidence that makes him believe he's not worthy and manifests in a breakdown that leads him to dramatically put weight on. It's an understandable reaction, given how much Thor blames himself for missing his shot to stop Thanos' snap at the end of Infinity War, but it also confirms that Thor's first lesson in humility didn't work properly.

In Thor, Odin strips his son of his powers, takes Mjölnir off him, and exiles him, sending him to Midgard to live as a mortal, with his enchanted hammer tantalizingly out of reach and unwieldable by only those worthy. Thor's crime is arrogance and impetuousness, a hot-headed passion that seems to be best quenched by war-mongering and bloodying his hammer. In hindsight, Odin's attempt to curtail that behavior was undoubtedly also linked to his fear that Thor would become like himself and like his banished older sister Hela, but there was more to it. Odin was seeking to realign something fundamental in his son.

Unfortunately for the by-then-departed All-Father, Thor's transformation into Fat Thor suggests he failed in that endeavor. His plan was to ground his son, but also to teach him the true lesson of worthiness: that goodness and integrity and altruism was the key to being the true ruler of Asgard. His lesson obviously manifested in him sacrificing himself to the Destroyer, in a rather extreme situation, but it worked - it just wasn't a lesson - made at great cost - that stuck with Thor. Endgame confirmed that his depression and weight-gain was linked inherently to the belief that he was no longer worthy, suggesting Thor deemed failure as a reason to be made unworthy. That much ignored precisely what Odin had sought to teach him.

When Thor meets his mother during his part of the time heist, he appears almost shocked when Mjölnir returned to him, suggesting his mental state was firmly linked to the failure to stop Thanos that he seemed to believe also made him unworthy. Considering Odin's lesson that led so poignantly to a God being empowered for the most human of gestures was about learning humility and casting off his immature, hot-blooded arrogance, Thor tying his self-worth to those same indicators after so long proves problematic.

That the All-Father sent Thor to Earth in the first place as a moral lesson wasn't surprising, given Odin's fondness for Midgard and its people, but it was supposed to be a lesson in privilege. Removing his power was as much about discovering the true indicators of being a leader as it was punishing Thor for fracturing the peace Odin had worked so hard for. But Thor's flashes of arrogance throughout the MCU beyond that point always hinted that there was something legitimate in his claims of "mightiness" and superiority over his other Avengers that went beyond comic writing. And in came the true confirmation that Thor simply hadn't grown as his father wanted him to. Perhaps that's why Thor's final moment of revelation in Endgame was to cast off his claim to Asgard's throne entirely and go to find himself?

Next: Fat Thor Secretly Reveals Why Thor Will Never Become Another Odin

Why Evan Peters' Quicksilver Should Return In WandaVision