The coronavirus pandemic has had an unprecedented impact on the film and TV industry. Here are the science fiction films now releasing in 2021. 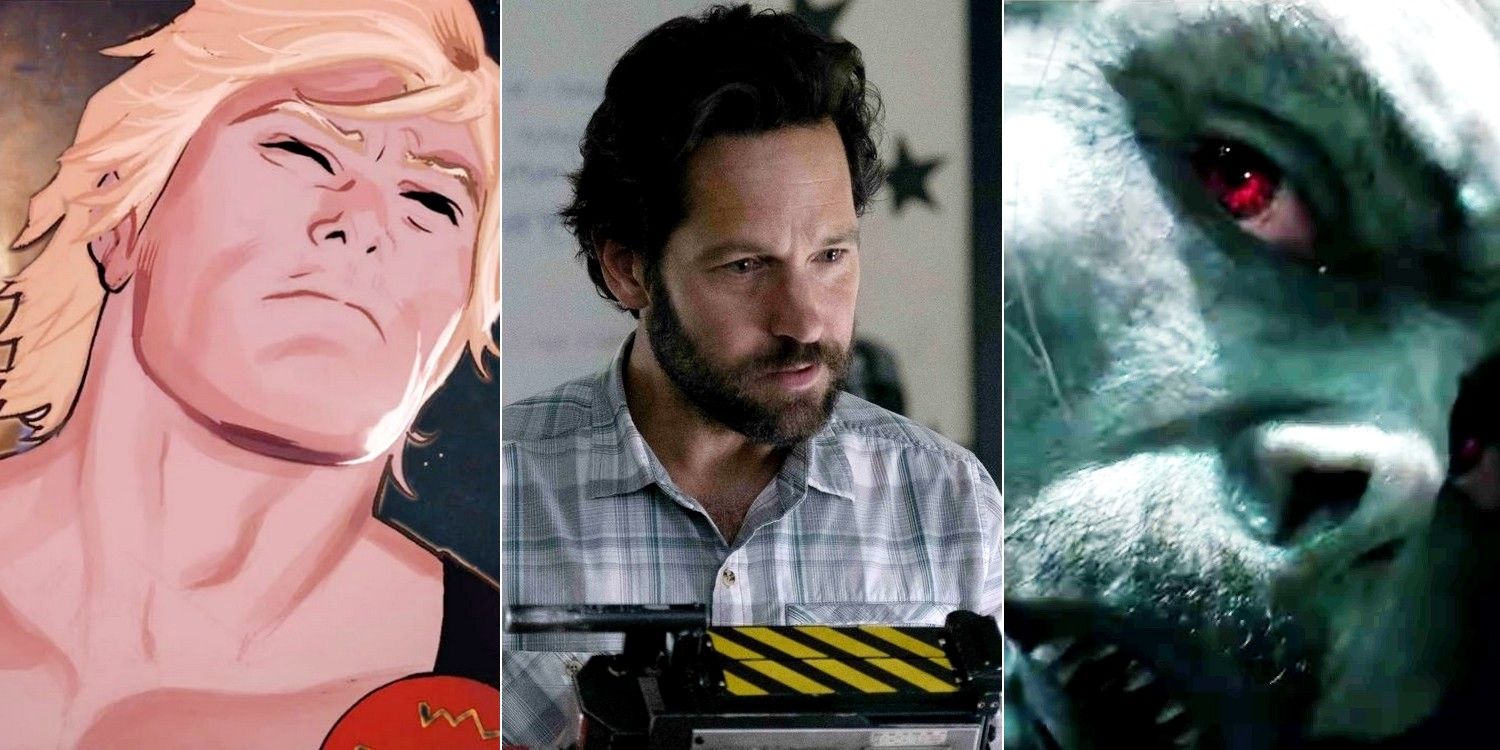 Which of 2020's planned science fiction releases have been pushed back to 2021 as a result of the coronavirus pandemic? Although barely halfway done, 2020 has been a year like no other, as a virus first detected in China during late 2019 swept across the globe at a rapid rate. The coronavirus has had a profound impact on modern life; entire countries on lockdown, hospitals pushed to breaking point, and businesses large and small forced to cease operations overnight.

In a wider context, film and TV production is only a small part of the coronavirus impact, but a part that has nonetheless seen massive upheaval over the past 2 months. Theater closures have forced completed movies into either streaming, immediate home release or lengthy delay, while a halt on production has forced movie studios to juggle their entire calendars for the next 2 years. As a result, films at various stages of completion have been pushed back, making 2021 a bumper slate as Hollywood attempts to make up for months of inactivity. Fans of science fiction in particular will find themselves with plenty of new releases to watch when the great outdoors is safe again.

There remains very little certainty surrounding the coronavirus pandemic. For better or worse, governments are beginning to ease restrictions in an attempt to avoid further economic damage, meaning theaters and studios could both be up and running in the coming months. However, that could all still change depending on how the virus develops, and restrictions may be reinstated in certain scenarios. Even when a semblance of normality does resume, the row between Universal and movie theaters proves that the effects of the virus rumble on for some time. Here are all the sci-fi movies that have been delayed to 2021.

Marvel Studios quickly discovered the perils of a shared movie universe in 2020. While the pandemic has affected films across the board, the MCU's interconnected nature, where releases generally incorporate elements of previous entries, has necessitated a massive shuffle of almost every film on the company's schedule. One of those movers is The Eternals, originally set to premiere on November 6th 2020. The first true entry in Marvel's Phase 4 (since Black Widow is set in the franchise's past) The Eternals will now release on February 12th 2021. Fortunately, Marvel's newest team completed filming shortly before the coronavirus measures were introduced, wrapping in early February, and post-production is reportedly being carried out remotely, ensuring The Eternals' production hasn't halted entirely during this testing period.

Based on the Marvel comic books, The Eternals will introduce the titular alien race to the MCU, and will star Richard Madden as Ikaris, Angelina Jolie as Thena, Kit Harington as Black Knight and Gemma Chan as Sersi in a star-studded ensemble cast. The Eternals have been hiding on Earth for many years, and will finally be called into action, albeit a few months later than anticipated.

Melding elements of comedy, horror and science-fiction, the Ghostbusters franchise has yet to repeat the cinematic success of the 1984 original.  was created reluctantly by its stars and this showed in the finished product, while the 2016 reboot from Paul Feig proved divisive, once again failing to ignite the box office. Now returning to the original continuity, Ghostbusters: Afterlife is a direct sequel to the originals and looks to blend returning classic cast members such as Dan Aykroyd and Bill Murray with new stars Paul Rudd and Finn Wolfhard in a cross-generational story.

Ghostbusters: Afterlife completed filming prior to the pandemic becoming widespread, wrapping in late 2019 with the release of the first trailer, and the film's premiere was initially set for July 10th 2020. But with post-production likely still needed, no opportunity for promotion and many theaters destined to be shut (or at least tightly restricted) on July 10th, Ghostbusters: Afterlife was delayed by 8 months as part of a big Sony shake-up. Interestingly, what would've been one of 2020's big summer releases will now arrive  in spring.

Morbius had endured somewhat of a roller coaster production even before the coronavirus hit, but the Jared Leto-fronted Marvel/Sony movie now finds itself subjected to a lengthy delay from its July 31st slot. Envisioned as part of Sony's Spider-Man villain movie series, there was only a moderate amount of excitement for Morbius initially. The franchise's first entry, Venom, had been reviewed poorly and the vampiric character boasts far less mainstream appeal than Marvel's black symbiote. However, interest piqued with the release of Morbius' first trailer - not only was there a strong emphasis on horror elements, but Michael Keaton was reprising his role as Vulture from Spider-Man: Homecoming, officially linking the film to the MCU.

Keaton's presence seems to have been made possible thanks to a deal between Sony and Disney that allowed Tom Holland's Spidey to stay in the MCU, but in exchange for greater crossover between the two franchises. With more toys to play with, Morbius underwent reshoots in the early part of 2020, and coronavirus entered the equation not long after. Since primary filming first wrapped in mid-2019, Morbius must be almost complete, but the delay is perhaps taking reshoots and theater closures into account.

Starring Mark Wahlberg as a man forced to question his past, Infinite was originally intended to arrive on August 7th, 2020, but has now been moved to the following May. Although Infinite filmed in the latter half of 2019, director Antoine Fuqua has confirmed the movie was in the editing process when production was closed due to the pandemic. Fortunately, Fuqua and his team have managed to keep Infinite moving forward from the comfort of their own homes. The delay ensures this high-concept sci-fi action piece can be properly finished and promoted ahead of release.

Pitched as a Matrix-esque, reality bending blockbuster, Wahlberg will play Evan, one of the titular "Infinites" who discovers his haunting, debilitating dreams are actually a rare ability to unlock past lives. Interestingly, Infinite will now release on a jam-packed memorial day weekend, which could be a blessing or a curse, as the new slot simultaneously offers a bigger release date, but increased competition.

Morbius isn't the only Sony Marvel movie to be delayed, as everyone's favorite alien symbiote has also fallen afoul of the coronavirus. Directed by Andy Serkis, the second outing for Tom Hardy as Eddie Brock will see Woody Harrelson's Carnage take center stage after his brief debut in the first movie. Meanwhile, Hardy continues to fuel speculation that he'll be joined by fellow Tom in the Venom sequel - Tom Holland's Peter Parker. Venom was still filming as of February 2020, but had reportedly started post-production by April, and currently finds itself in limbo alongside almost every other major movie.

With an original release date of October 2nd, 2020, Venom: Let There Be Carnage had a realistic chance of making it into theaters post-lockdown, but with the rest of Sony's schedule forced to shuffle, the Venom follow-up  slid back into 2021, and will now come shortly after Morbius, as originally planned. With regards to releases that were scheduled for the back-end of 2020, the delays are probably more to do with studios addressing their cinematic backlog.

Chris Pratt and J.K. Simmons star in this time-travelling war film, in which soldiers from the past are recruited to fend off an alien invasion yet to come in Earth's future. The Tomorrow War will be directed by Chris McKay of The Lego Batman Movie fame and originally had a Christmas Day 2020 release in the works. Compared to other delays, The Tomorrow War's setback is marginally less drastic, and that might be partly because filming had already wrapped in January. One would certainly hope the world would be moving back to a state of normality come Christmas, but The Tomorrow War's new date came as part of a general overhaul by Paramout that also included the next two Mission: Impossible movies. While undoubtedly a fascinating concept, The Tomorrow War faces stiff competition next summer among other sci-fi movie releases.

More: Predicting Who Wins The Oscars 2021 (If All Other Movies Are Delayed)

Too Hot to Handle: Why Chloe Veitch Regrets Wearing Such Heavy Makeup on Show