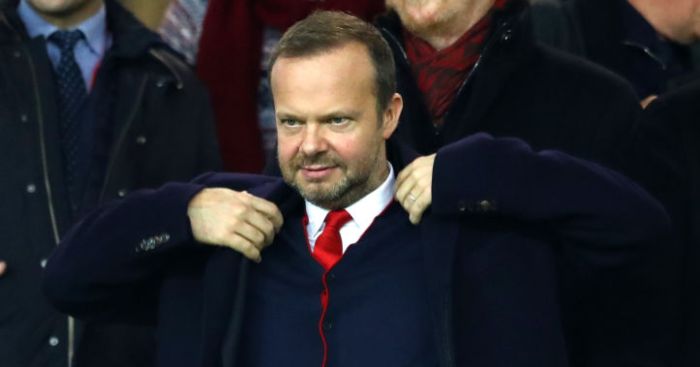 The former United star has been critical of the club’s transfer activity in this window and claims the problems stem from Woodward being too trusting.

Evra also claimed leaving negotiations in the hands of Matt Judge is a mistake, as he is “not from the football world”.

My only joy from my club right now. Go on my Instagram or facebook for the full video. pic.twitter.com/rdICmPKhbv

After United lost their Premier League opener to Crystal Palace, Evra recorded a video at home to vent his frustration at his old club’s stuggles.

“The only problem I would say to Ed Woodward is that he trusts in people and he should never trust them. He even trusts some people outside the club, that’s what I can say about that,” he said.

“People like Richard Arnold are why we’ve got money, these guys can make some sponsorship deal like you can’t imagine, so we’ve got the money, but we’ve not got the players because we send the wrong people to speak with them.

“Ole is trying to change that, he’s trying to speak to the player like Ferguson used to.

“Every year it’s deja vu, we make so much impact on social media but the reality is [nothing]. Fans have to understand it’s not that you buy five, six, seven players the team will improve, but at least your main target, that’s what we’re not doing anymore.

“Under Fergie and David Gill we didn’t have anything in the paper but bam-bam-bam-bam, Van Persie, Evra, Vidic, Ferdinand, everything was fast, they go and talk face to face.

“But now it’s Matt Judge, we send lawyers to talk with players and when you send a lawyer they talk about numbers, they’re not people from the football world.”