If you see a bear, check size, shape and more to find out what type it is. 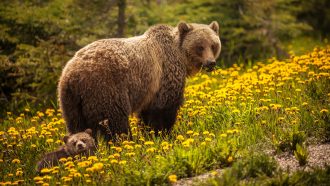 You might think it’s easy to tell whether you’re seeing a black bear (Ursus americanus) or a brown bear, which is sometimes called a grizzly bear (Ursus arctos). After all, one is black, and one is brown, right? Well, not quite. Some grizzly bears can be very dark. Some black bears can be brown, grey, cinnamon-colored or even white.

Here are some tips for what to look for to tell a black bear from a brown bear.

If you see a bear, don’t panic! Most bears don’t want to see you either. Instead, introduce yourself. Talk to the bear in a normal voice, so that it knows you are a human. Wave your arms and do what you can to make yourself look large. Move away slowly by moving sideways, so the bear doesn’t see you as a threat.

To lessen your chance of seeing a bear, it’s a good idea to travel in groups when in bear country. Groups make more noise, so bears will hear you coming and know to get out of the way. If you are in a place where bears are very common, you can also carry bear spray. But make sure you learn how to use it.

And don’t feed the bears. They might look cute, but wild bears are best left to wild dining. If they get used to seeing humans as a source of a snack, it’s the bears who will end up in trouble.

Science and Indigenous history team up to help spirit bears

Legos could last a disturbingly long time in the ocean

How do you build a centaur?