Arthropods are all around us, but identifying them can be hard. To start, look at the four main groups: chelicera, crustaceans, myriapods and insects.vvv 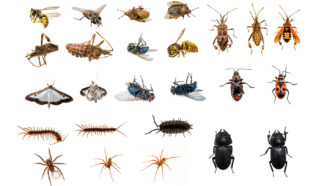 Arthropods come in almost every shape and color imaginable. And they can be found in diverse environments, from the ocean deep to dry desert to lush rainforest. But all living arthropods have two key characteristics in common: hard exoskeletons and legs with joints. That last should come as no surprise. Arthropod means “jointed foot” in Greek.

Arthropod joints work similarly to ours, notes Greg Edgecombe. He works at the Natural History Museum in London, England. This paleobiologist studies arthropods. Many of them have “knee” joints very similar to ours, he says.

Our hard parts — bones — are on the inside, beneath our skin. Arthropods instead put their tough stuff on the outside where it acts as a suit of armor, Edgecombe says. This lets them live in rough environments, including underwater and underground.

Different species of arthropods have many unique traits, but all fit into four main groups: chelicerates (Cheh-LISS-ur-ayts), crustaceans (Krus-TAY-shunz), myriapods (MEER-ee-uh-podz) and insects.

Unique features help scientists put arthropods into subgroups. Most arthropods have jaws similar to ours, called mandibles. But unlike us, arthropods chew from side-to-side — unless they are chelicerates. These critters have swapped out jaws for jointed fangs and scissor-like cutters. These animals take their name from those alternative mouthparts, called chelicera.

Arachnids (Ah-RAK-nidz) are one class with sharp chompers. Some have venom in their chelicera. But you don’t have to get too close to those fangs to identify these critters because most arachnids have eight legs.

The group arachnids include spiders and scorpions. But there also are weird members of this class, such as solifugids (Soh-LIF-few-jidz). They look somewhat similar to spiders but aren’t spiders. And they have gigantic mouthparts that “can literally chop and shred prey to pieces,” says Linda Rayor. She’s an arachnid biologist at Cornell University in Ithaca, N.Y. “What’s really cool about the arachnids is that they’re all predators,” she says. And they are “more than willing to go after each other!”

Sea spiders and horseshoe crabs belong to other classes of chelicerates. Sea spiders look like spiders but live in the ocean and are distinct enough to belong to their own class. And horseshoe crabs are sometimes considered an arachnid. Despite the name, they are not real crabs, so they’re not crustaceans. And their DNA is similar to arachnid DNA. But they have 10 legs, not eight.

If you’ve ever dined on tasty crab, lobster or shrimp, you’ve eaten a crustacean. Yet this group of arthropods also includes less-than-appetizing barnacles, woodlice, krill and plankton.

Crustaceans range in size from the Japanese spider crab, which can grow to more than four meters (13 feet), to tiny, microscopic copepods. “Those guys are really important because they’re the basis of the food chain,” says Brian Farrell. He’s an entomologist at Harvard University in Cambridge, Mass. He works at its Museum of Comparative Zoology.

Most crustaceans live in the water, Farrell points out. But some woodlice, also called rollie pollies, dwell on land. Although they have fourteen legs, don’t confuse them for myriapods.

You probably know the two main types of myriapods: millipedes and centipedes. Myriapods live on land and most have lots of legs. And although centipedes and millipedes can look similar, there’s a key difference. “Centipedes are all predators,” says Farrell. “They have fangs.”

These fangs are not chelicera. Centipedes instead eat with mandibles, as crustaceans and insects do. But they also have a pair of venomous, fang-like legs.

Millipedes, in contrast, are herbivores. Because they eat plants, they don’t need to move quickly. So millipedes are much slower than centipedes.

Insects: the largest group of arthropods

There are more species of insects on land than all other arthropods combined, says Kip Will. He’s an entomologist at the University of California, Berkeley. Bees fly, beetles crawl like tiny armored tanks and the Australian walking stick has camouflaged itself to look like a leaf mixed with a scorpion. Different as insects can be, pretty much all of them have six legs and the same three body parts — head, thorax and abdomen. “They’ve just modified each of those in ways that sometimes they look very, very different,” Will explains.

“There really isn’t one thing” that caused all those different insect shapes to evolve, says Will. It might be due to the world they live in. Their small size, Will says, means insects see the world differently from us. For example, “there could be a single tree where you have insects that feed on the roots, under the bark, in the dying wood, on the buds, on the flowers, on the pollen, on the nectar and,” Will says, “it just goes on and on.” Each of those food sources might require a slightly different body shape. It’s like an entire ecosystem on a single tree — and each species has a different shape to fill a different role.

Though people often use the term “bug” to mean any creepy-crawly, the word actually belongs to a specific group of insects. That group includes stinkbugs and bed bugs. That means all bugs are insects, but not all insects are bugs.

Now that you know more about arthropods, the next time someone asks you to look at a “cool bug” that turns out to be a spider, you can tell them exactly why it’s indeed cool — but no bug.

Honeybees fend off deadly hornets by decorating hives with poop

Who Are Your Collaborators?

Are coyotes moving into your neighborhood?

Let’s learn about the sun